Another unit of the new dragoons completed - this time with a little modification.


As mentioned my previous post I am not all that keen on the pose with the sword low down alongside the horse (see below). For this unit I have the sword on the shoulder, using the arm from the cuirassiers. The arm is a little on the large size, but not really noticeable, it also requires a bit of work modifying  the cuff, as the cuirassier has heavy gloves and the dragoon are bare handed.

I think I prefer the sword on the shoulder - any thoughts?
Posted by SteveM at Sunday, June 16, 2019 5 comments:

I have just completed my first 8 man unit of dragoons. These are new figures, so as a change from my usual practice of photographing the assembled unit I thought it worthwhile showing the individual figures.

I have painted them up based on Erzherzog Joseph Dragoons, but with some simplification (for example my hand is not steady enough for multiple lines on the saddle cloth). The figures are mostly as in the mould, but with one main change - I have replaced the heads with  older infantry officers heads, with mustache just painted on where appropriate. I did this primarily because I think the older, hand sculpted heads have better definition on the facial features - and also to maintain continuity with the cavalry I have already converted from the Karoliner range.


Apart from the Russian officer's head the only other minor change I have made is to fix the carbine a bit lower than the lug/hole suggested. 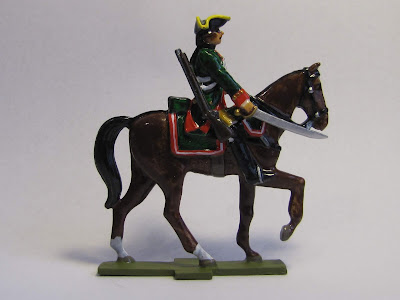 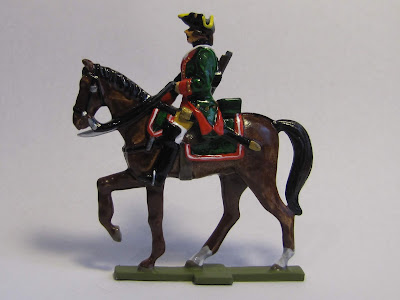 
This time with an Austrian officer's head - another nice figure, who is also going to act as 'Brigadiers' in my army proudly taking command of 3 or 4 units. 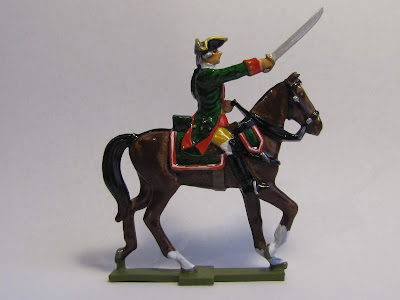 (I appreciate the officers saddle cloth should be a different colour - however I had already painted it before I remembered and did not feel inclined to change it.) 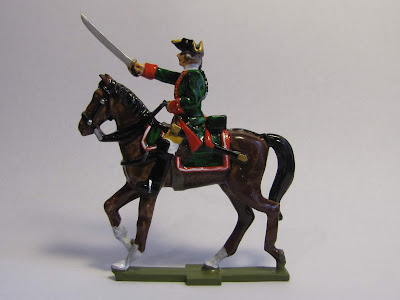 
Dragoons had drummers rather than trumpeters, apart from the head (and sword hilt) this is the standard figure. 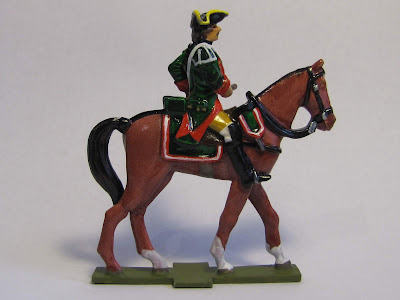 I'm sure it would look better if I could paint an eagle on the drum - but these are wargames toys not display figures! Also there should be a sword hilt showing which was forgotten by sculptor, I could have easily corrected it using the hilt of of a sword from elsewhere - but I missed it until too late! 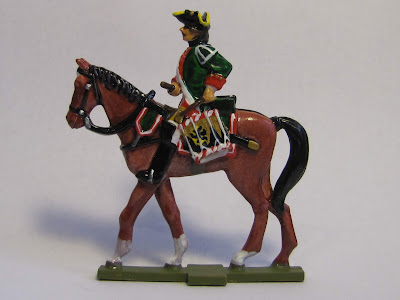 And finally the standard bearer. There is no actual figure for the standard bearer (we did not think it warranted an additional mould) - instead an extra arm has been provided to convert either the officer or trooper - I chose the trooper as he has a carbine cross belt which looks very similar to the one to carry a standard (there is also a cartridge box on the back). 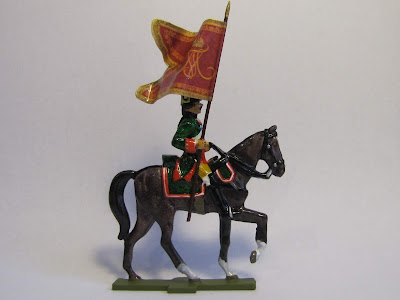 The trooper and officer both have drawn swords, whereas for the standard bearer it should still be in the scabbard - I just glued on the hilt of a French sword. 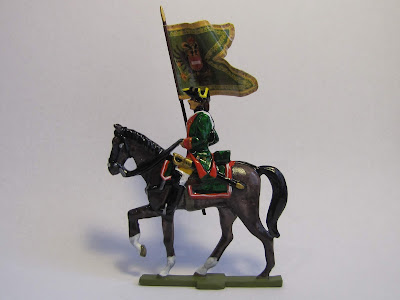 
I have now based them up, so here is the completed unit. 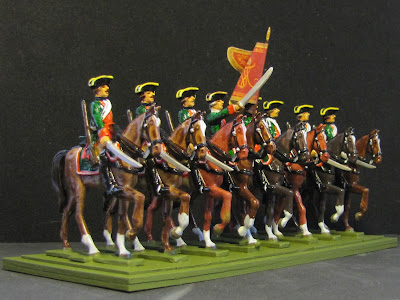 First of all a comparison with the Austrian infantry. Both the infantryman and dragoon measure about 42mm from heel to top of hat - so that looks fine. 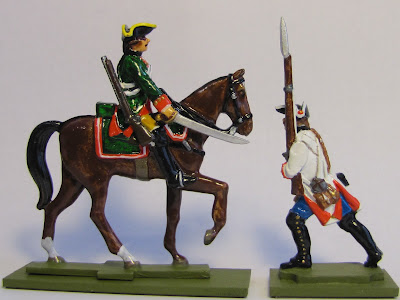 Next a comparison with my converted Karoliners. The Karoliner appears marginally larger, although again the men's heights are about the same - I suspect the difference is the larger head on the Karoliners horse. I think they will look fine together, particularly with the same heads on both figures. 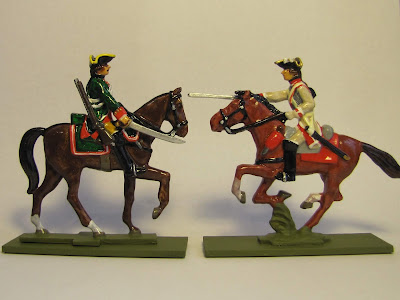 And finally the cuirassiers - I checked it, that really is only 7%! 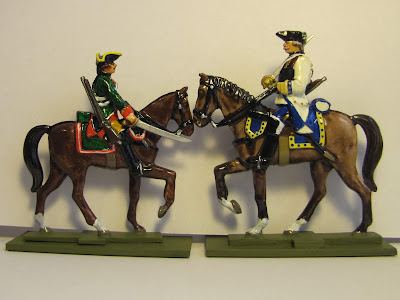 And as requested by Ross - a couple of shots against the old HE with musketoon. 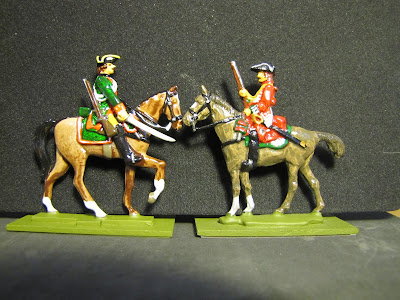 The new figure is a bit larger and bulkier than the old HE, which is in line with the whole of the  SYW range. Note that I have used the Russian officer's head as I like the look of an almost full round head on the semi-flats (just personal taste), however the heads in the moulds are not quite as wide. 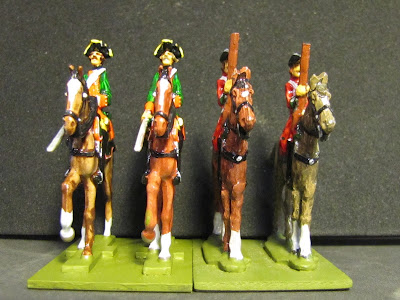 
The dragoons are really nice figures, I would have preferred something with a bit more energy, but will still be using them for the bulk of my Austrian and Prussian dragoons.

I have a unit part finished which have the sword arm replaced by the one on the shoulder taken from the cuirassiers - it will be interesting to see if the larger arm really shows up?

As always comments would be appreciated.
Posted by SteveM at Saturday, June 08, 2019 6 comments:

I have also had a play, and made a unit based on Prussian Hussar regiment No 8 using the Rossbach moulds. 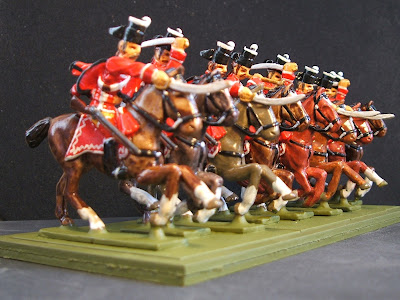 In the past I have not used these moulds due to the lack of a trumpeter and carbine, however I decided  to buy a pair (in the recent half price sale) to give them a go and add the missing parts from SYW cuirassiers. I cut a bit off of the end of the cuirassiers carbine - but I think it is still a bit too long. 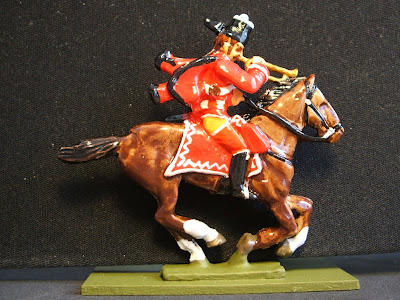 I also made a trumpeter - this was a bit more radical -  I cut/filed off the whole of the arm from the hussar with the raised sword, then glued on a cuirassier trumpet arm (after filing off the swallows nests). The arm is actually on the large size, but close enough.

I suspect there will be a deaf horse if he blows the trumpet, however I tried raising it but it ended poking him in the eye - which looked worse.

In order to provide the Austrians with some light troops I have painted up a unit of Frei Corps Grun Loudon. (I know they probably did not fight in open order - but until the Grenz moulds are available I wanted something). 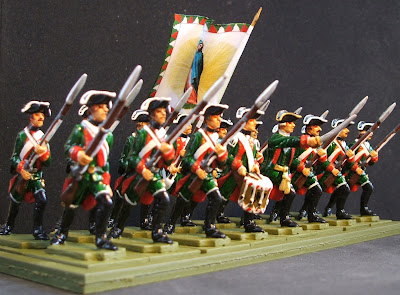 For the figures I used the following:


The figures above are in my standard 16 man unit, and are shown in close order. However for skirmishing they are all individually based, and I decided that in that role they should lose the  standard and drummer, so I have replaced them with another NCO, and an officer with musket, using a Russian officer (with the gorget and lapel buttons removed). 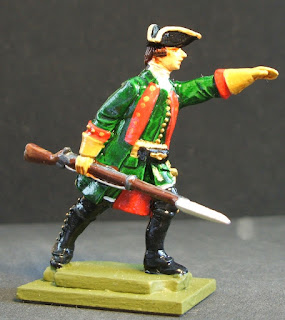 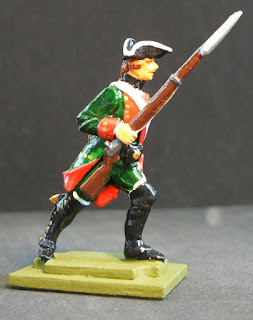