Back in July last year I posted a picture of the 'green' for the Austrian cuirassier, which received encouraging feedback. 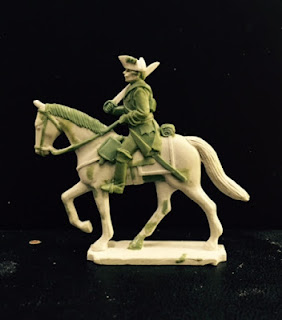 Soon afterwards PA decided to move over to digital sculpting. The changeover has not been as smooth as hoped, and nothing has been added to the range since the Russians, which were that last of the traditional sculptures. Things are now moving again, the French infantry are ready to go, with a few production problems being ironed out.

The figure has now been replicated digitally, and we think it is pretty much complete. In response to  comments last year the reins have been stylised a little to give the impression of being double, without making the area around the bit too heavy 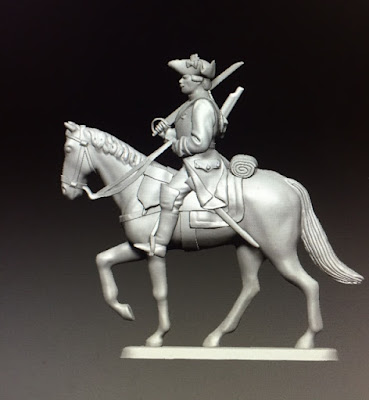 There are a couple of minor changes I have asked Chris to make:
I think it looks very nice, if there are any error/omissions please let me know.

Progress on this is not quite as advanced, and the horse, sword etc. will be replaced with the one above - so please just consider this as a taster.

I asked him to base the pose on the old Holger Eriksson mould PA26, and I think it will end up looking great. 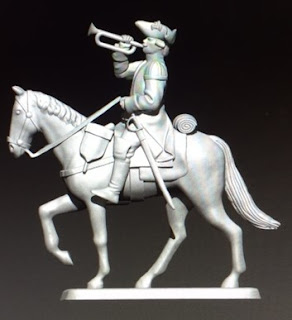 There will also be an officer with a sword pointing forwards and a standard bearer, both based on the trooper.  Progress is not sufficient to show, as the plan is to tidy up everything on the trooper first and move on from there.

Once the Austrian cuirassier are complete, in order to keep things moving we are considering issuing a 'Prussian' dragoon mould. This will just provide torsos and heads to fit the same horse, and would contain:
Dragoons were pretty generic, and with minor changes such as tricorn style and the way the carbine is slung (it will be separate) the Austrians, Prussians, French  and quite a few others could be covered.

If we can squeeze them it we could add some horse grenadier heads - if not they will have to be taken from the infantry.

Unlike the Austrians, Prussians etc the Russians had their sword belts on the outside of the coat, so these will need some additional moulds.

The French cuirassiers also had belts on the outside.

These will need separate moulds as they wore coats with shorter tails.