I have now completed my (the?) first unit of SYW cavalry, in doing so I made a couple of minor modifications relative to the figures as designed:
I painted the coats off-white (Vallejo Ivory Pearl White) - after my visit to the military museum in Vienna I am convinced that is what all of the white should be. It also looks better and also shows off the belting - I will probably try my next infantry the same way. 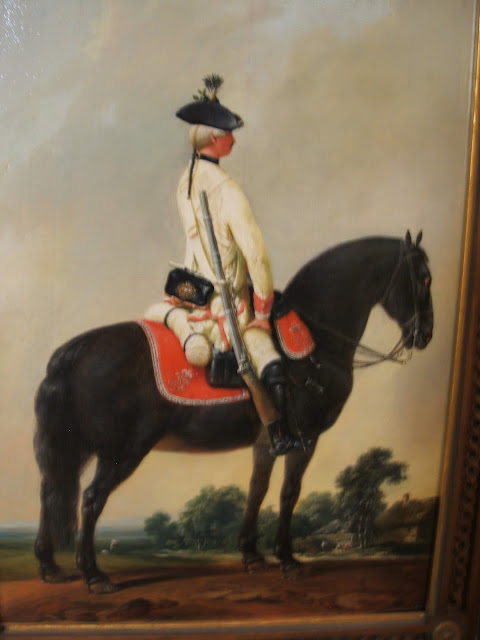 I have taken photos from 8 angles, so you should get a good idea what the new figures look like. 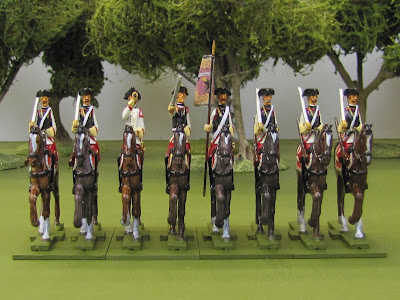 As with the older ranges, the horse is cast flat in the mould, however being multi part the torso is cast the opposite way, allowing detail on the cuirass. 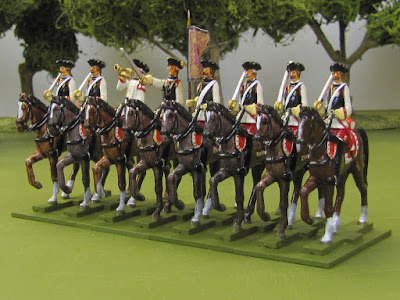 The sword arm (and head) are also separate, allowing the arm to be well detailed. The joint between the rider and horse is around the coat tails - but not really visible. 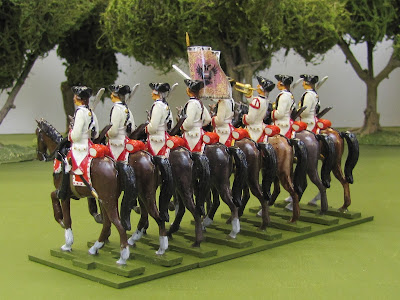 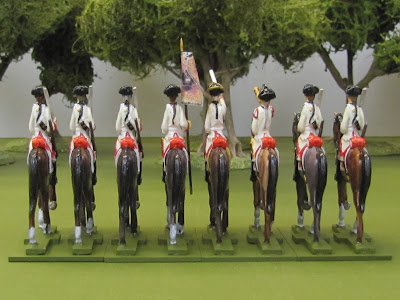 The fit between the arm and torso was a bit tricky and left a small gap, however it filled in fine with paint without the need for any filler. 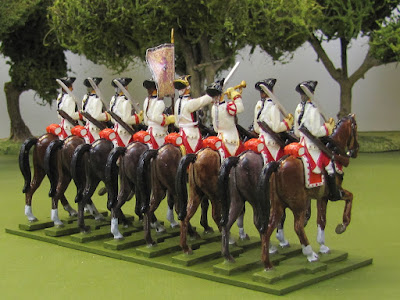 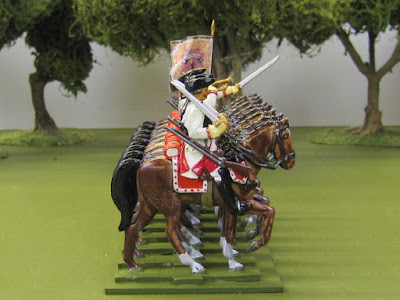 There is also a separate carbine. 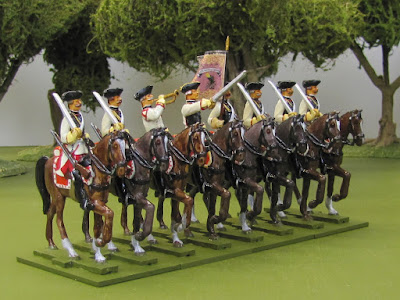 I think the figures look great, and are pretty much what I was hoping for. They are a bit more work than the older ranges, but in my opinion worth it.


As discussed in the previous post, these chaps are a bit on the large side. the horses are OK for a 16 hand cuirassier horse, but the riders are large (I think about 7%). 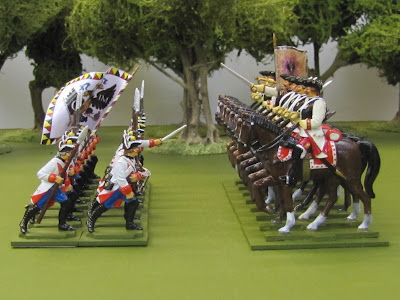 It only really shows up when the units are very close. 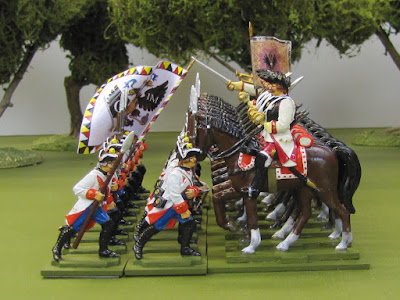 I am advised that the tooling work for the cuirassiers is underway at the factory, and PA have announced a planned release date in June.

The sculpting for the dragoons is also almost complete. I have asked if it is possible to 'plot' these about 7% smaller, this will bring the men into scale, and also reduce the horse from the 16 hands appropriate for the cuirassiers to 15 hands for the dragoons.


As always please let me have any comments/feedback, and I will pass them on to the sculptor to assist in deciding what to do with the next releases. (I will be away from my computer for the next week, so replies will be delayed).
Posted by SteveM at Sunday, April 22, 2018 7 comments:

The nice postman delivered me a package today containing something I have been waiting for for quite some time. I now have the silicon test moulds for the Austrian cuirassiers - and as I am not at work this week had time to cast up a few.


One of the reasons we have taken so long to get to this stage was deciding how to cast separate horses and riders whilst keeping the semi-flat nature of the range. Consideration was given to a number of options:

In the end we opted to cut around the coat tails, and leave the legs on the horse (my idea, so don't blame PA if you don't like it!).

Currently there is only one horse which is used for all the riders. 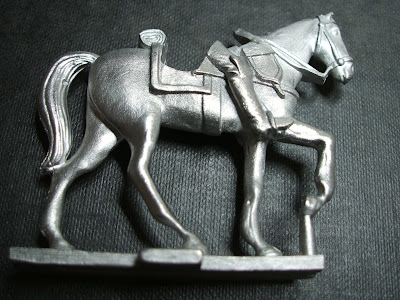 
As with the whole range,  all the figures have separate heads. Also, in order to get decent detail, the arms are separate (and generally interchangeable)

There should also be a carbine - but that is coming later😞 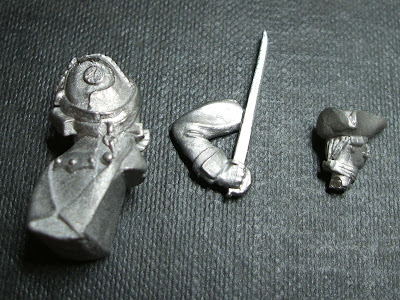 The figure fits neatly into the slot and it is difficult to see the join. 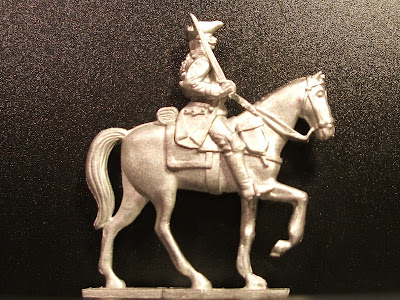 I think he will paint up very nicely!


As with the trooper there is a separate head and arm. (The arm will fit the trooper if you don't like the at rest pose.) 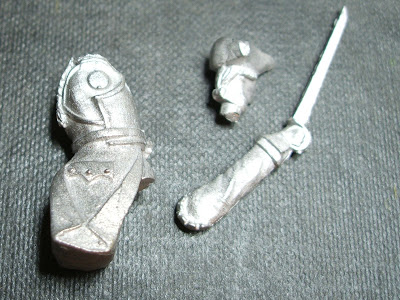 Not that you will notice it - but the head has no mustache. 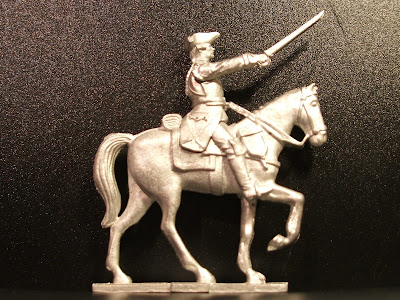 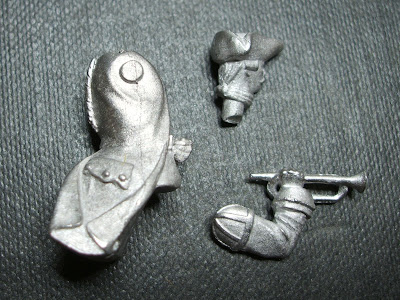 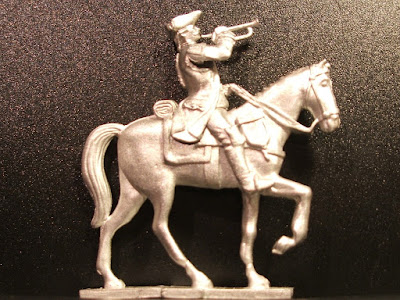 
This chap needs a pile adding for his standard. 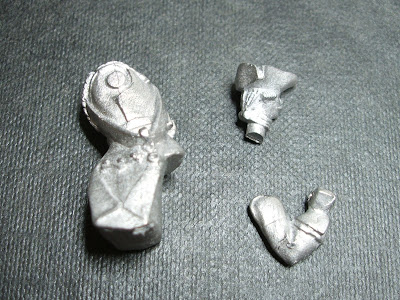 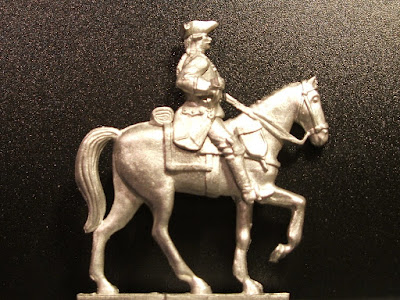 
These guys are big compared to the original Karoliner cavalry. 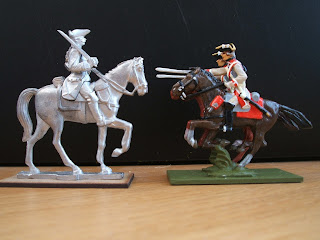 The new cuirassier alongside a Karoliner charging Russian cuirassier, this figure was converted by adding a SYW Russian  officer's head. (See photo lower down with a the same Karoliner without the head swap)


Rahway has requested a comparison with the old HE figures, so here is one alongside the HE cavalryman on the 5 legged 2 tailed horse (which actually works well to add variety to units). 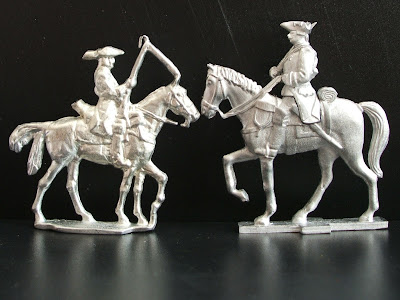 The horse is clearly taller; exactly how much is difficult to measure; the SYW horse is probably about 41mm at the shoulder compared to 37mm on the old HE. The new one is clearly taller. however we are comparing a 16 hand cuirassier horse with a 15 hand for a dragoon, so overall only about 5% increase in scale, which is probably in line with the difference between the new SYW infantry and the old Karoliners. 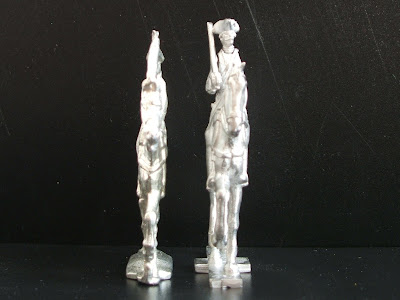 The new SYW figures are however much more detailed, and bulkier. Being multi part, the horses and torsos can be cast different ways in the mould', allowing detail on the front of the figures, such as clasps on the breastplate.

The big difference is the rider; one of the major changes between the new SYW range and the older ranges is the heads, the old ones really were too small, particularly the hats - however he is actually a bit too big - see below. 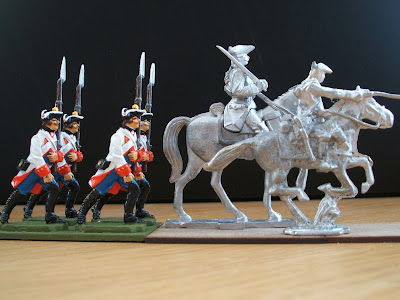 It can be seen that the SYW Austrian infantry (leaning forward) stand about the same height as the new horse, so the new horse fits in with the infantry. The Karoliner horses are clearly small relative to the Infantry.

Where there is an issue is the rider, which should be the same height as the infantry (cuirassiers were not taller than the infantry - my earlier mistake - sorry), however he is clearly taller.

So, in conclusion, the new cavalry will fit nicely with the new infantry (although the riders are a bit too big). However they will not mix in units with the older ranges - but neither will the infantry.