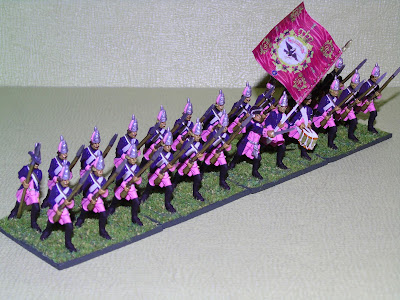 I also asked him for some background to his SYW project to allow me some text to put with the photos. He sent me quite a long email, which he has agreed I can repeat pretty much in full, - as it gives an insight into why he chose to use the PA moulds, and what else he would like to see.


"My experience with the SYW came straight out of Charles Grant and Prince August.  Charles Grant's 'The Wargame' and his fictional imagination campaign books are just great and tremendous inspiration.  However, the SYW would never have come about without PA because I specifically wanted the toy soldier look for this project.  I already do Napoleonics in15/18mm so really did not need another horse and musket era unless it offered something unique and casting your own armies is certainly that! 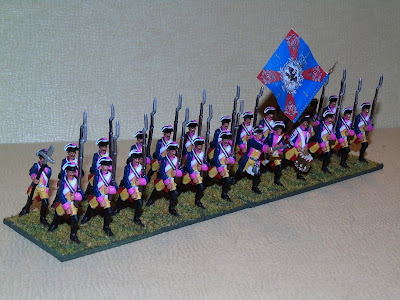 I currently have 15 regiments of foot troops painted and based along with 13 guns and crews.  I have one cavalry regiment, hence the reason I have been asking for cavalry molds for so long!  I am excited about the new cuirassiers but do hope they prevent more scale creep within the series.  In general the molds have been well mastered and easy to cast.  I would like to see a remaster of the initial Prussian molds to bring them up to date with the others (buttons on gaiters, better musketeer head and slings on the muskets).  In terms of basic molds for the SYW, we are so close to getting it done I hope that PA recognizes the benefit of having a complete range to offer gamers.  More cuirassier torsos and everybody's dragoons would do nicely to round out the basics.  Hussars, command and light infantry could then be added in the future to really fill it out.  British troops would sell well, especially on your side of the pond, but I would not want those to slow down completing the basic line of European continental armies (but of course I would still buy them!). 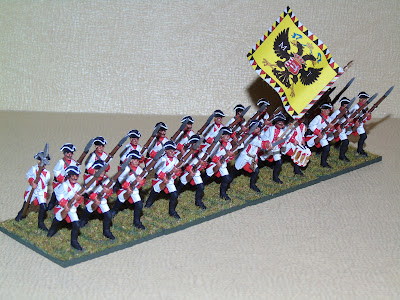 I use PA Model Metal exclusively and casting issues have been few, although some are persistent.  I do not believe the hub on the artillery piece wheel has ever fully turned out leaving me to file it down before filling the hole with putty.  The more important thing is that I do get the wheel spokes on a consistent basis so I don't mind filing the hubs.  The pegs on the Russian infantry heads are too thick and each one has to be filed down to fit in the hole.  That is annoying but doable.  The hands for the artillerist with the trail spike are awkward and the fit questionable.  Still, these are essentially minor complaints and overall casting has been quite successful. 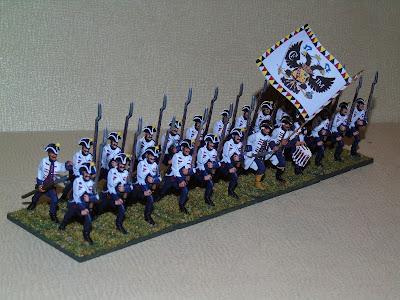 Going forward, I have some regular and conversion regiments on the block to paint.  Austrian regiment Puebla used scalloped lacing on their tricornes so I used the Prussian guard head for them.  I created my version of Saxon infantry by using the Austrian musketeer head on the Russian winter infantry body.  Three regiments of French troops are primed and patiently waiting the brush.  Of course, all of this can be interrupted by cavalry molds! 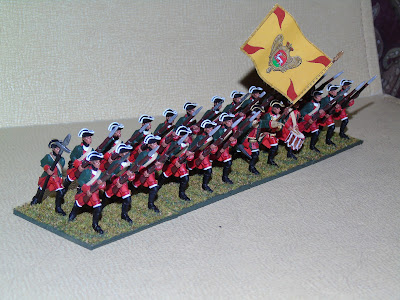 For rules, my original thought was to use The Wargame with half size regiments, and I still might,  However, I recently tried Honours of War and really liked them.  The idea for rules will be to make them fun and not too complicated so players can enjoy the game and retain some of the feel of the old school toy soldiers. 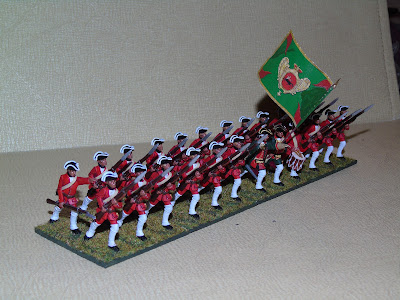 That's it for now but feel free to ask for more pictures or anything else I can do to help with the project.  This really is a unique opportunity for PA and for gamers alike to be able to purchase and cast their own armies.  I realize it is not for everyone but honestly it is a lot of fun and you really do have more investment in the armies when you create them yourself."


Personally it is great to see how the new range are being used. If there is anyone else out there who would like to contribute to the blog PLEASE send me your photos and thoughts.

'Scale creep' is an issue,  it is one of the many difficulties which has arisen with the change to digital sculpting - hopefully it is being addressed?

I know there are some minor issues with the range, and even after the years spent on this project it is sometimes difficult to 'mould' PA into the mindset of the wargamer - but in general I think we re doing OK.

As always your comments are welcome, I do pass them to the sculptor (who follows this blog), and they are taken into account.
Posted by SteveM at Sunday, May 13, 2018 7 comments: