Don't get too exited!

For the last couple of years, with the arrival of the new SYW range I have concentrated on the new infantry figures and held off painting any more cavalry waiting for the new moulds.

However, I could do with a few more units of cavalry for a game I am putting on over the Christmas break. The new SYW cavalry is some way off, so I decided to use old Karoliner castings that have been sitting in a box in the garage for the last few years.

The Karoliner cavalryman K-931 is a nice figure (possibly not quite as stylish as the old HE version, but much more suitable for fitting in with the new range), and I already have a few units of them in my Karoliner/French army. 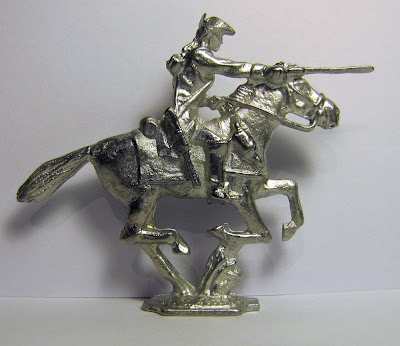 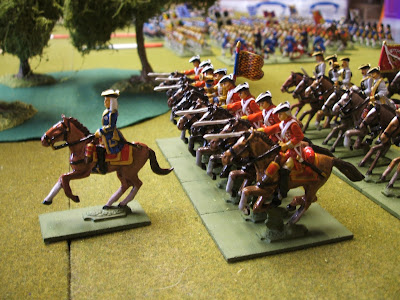 Although a nice figure, with the small head and hat it will not really fit in with my new infantry units, so I decided to have a play and see what this figure looks like with the new heads.

The Karoliner range have their belts on the outside, so are only really suitable for Russians and some cuirassiers, so I decided to do a Russian - probably cuirassier! I used the Russian officer's head, as this has formal curls, and also a large cockade on the front.

The head cuts off very easily with a heavy duty knife, and leaves a wide enough area to drill to accept the peg on the head. The fit is bang on, and if you use some thick super glue there is no need for any filler. 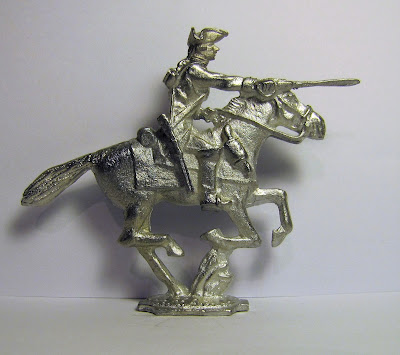 I think the more detailed and head and larger hat (the heads are cast in Model Metal for more detail) really bring the figure alive. I was so impressed that I decided to try a horse grenadier with the Russian grenadier head, which I think is also a good fit! 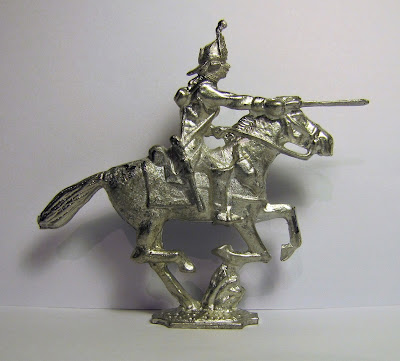 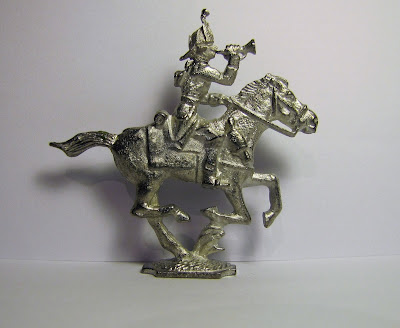 I have a small unit (8 troopers) of each on the painting table, I will post some pictures when they are finished.

I hadn't really noticed before, but these figures, particularly the trumpeter must be wearing very tight corsets to get a waist like that!

I'm sure the new cavalry will be an improvement on the Karoliners when they come out, and are needed for all the nations with the sword belt under the coat. However if you want to get some more mileage out of those old Karoliner moulds, or like me have some castings hanging around, this is worth a try.

Chris Tubb (the sculptor) has decided to move to digital sculpting, as you can imagine there is quite a learning curve involved. This has contributed to the slowing up of figure production, but should pay dividends in future.

Changing to digital sculpting part way through the range needs to be done carefully. In order to 'calibrate' the digital design, rather than go straight to the cavalry it was decided to produce some French infantry to get the proportions, and 'feel' right.

The approach he has taken is to manually sculpt an 80mm infantry torso to mimic the pose of the figures already done, and then 3D scan this to form the basis of the new digital sculpts. The first figure digitally sculpted is a French Infantryman advancing, he is shown below with an Austrian in a similar pose for comparison (I know the Austrian grenadier should have a sabre, but it is a similar pose). 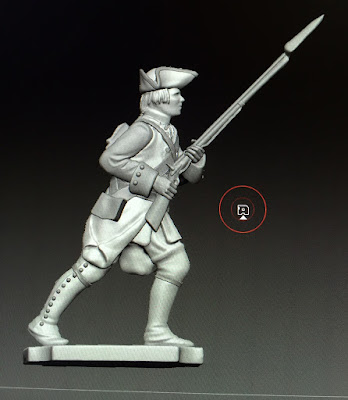 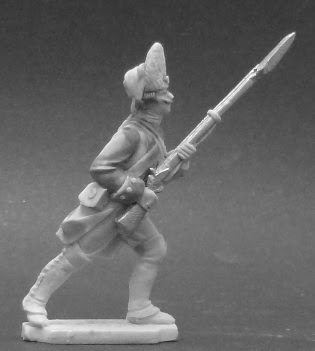 The pose matches quite well. Looked at side by side there is quite a difference due to the clean nature of the digital sculpt, however I doubt that would be anything like as obvious in a painted casting.

The musket is probably a more realistic thickness, but i just wonder if it might benefit from thickening up a bit? 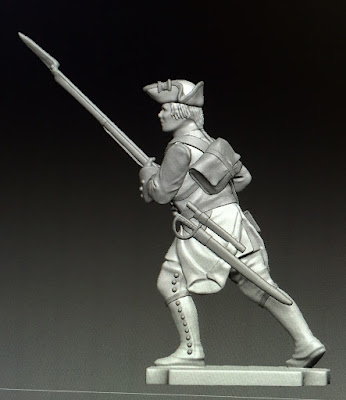 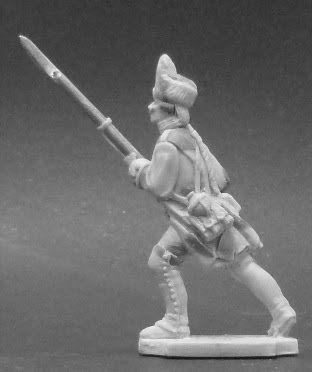 Chris is planning to 'print' the figure in the next few days, after which he will make me a mould and I will cast some up to see how they look in the tin.

If you have any comments PLEASE let me have them, and I will pass them on.

It was originally planned to release the cavalry next, however with the move to digital the plan was side tracked (to a great extent by me), in order to try and get the feel right.

With the French so well advanced, after some test casts have been done it might be worth finishing off a French infantry range and get them into production, I would suggest a couple of moulds as discussed back in August.

Easy to add an 'early' version of mould 1 with no turn backs for WAS etc.


The change to digital is happening, and if not done right could spoil this range. Your comments are important and welcome, so please make them, they will be listened to.


Rahway commented on the depth of the cartridge box, I thought it looked shallow as well and discussed with Chris, who sent me an additional image from the rear, the depth is OK. 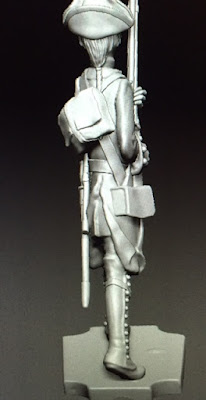 The images seem to have some quirks, for example the base above looks tapered, but I am assured it is not!

The image raises another point we have been discussing. Putting the sword outside the coat leaves a large gap between the sword and leg, details like this may be OK for commercial spin casting, but not for producing the home casting moulds, there are not many options to make it suitable for home casting:


We think that a separate sword is the answer, as:


Has anyone noticed he has two bayonets, one on the musket and one in the scabbard?