The game was fought using the Maurice rules; I took the Austrians and one of my regular opponents, Quinton Dalton, the Prussians. 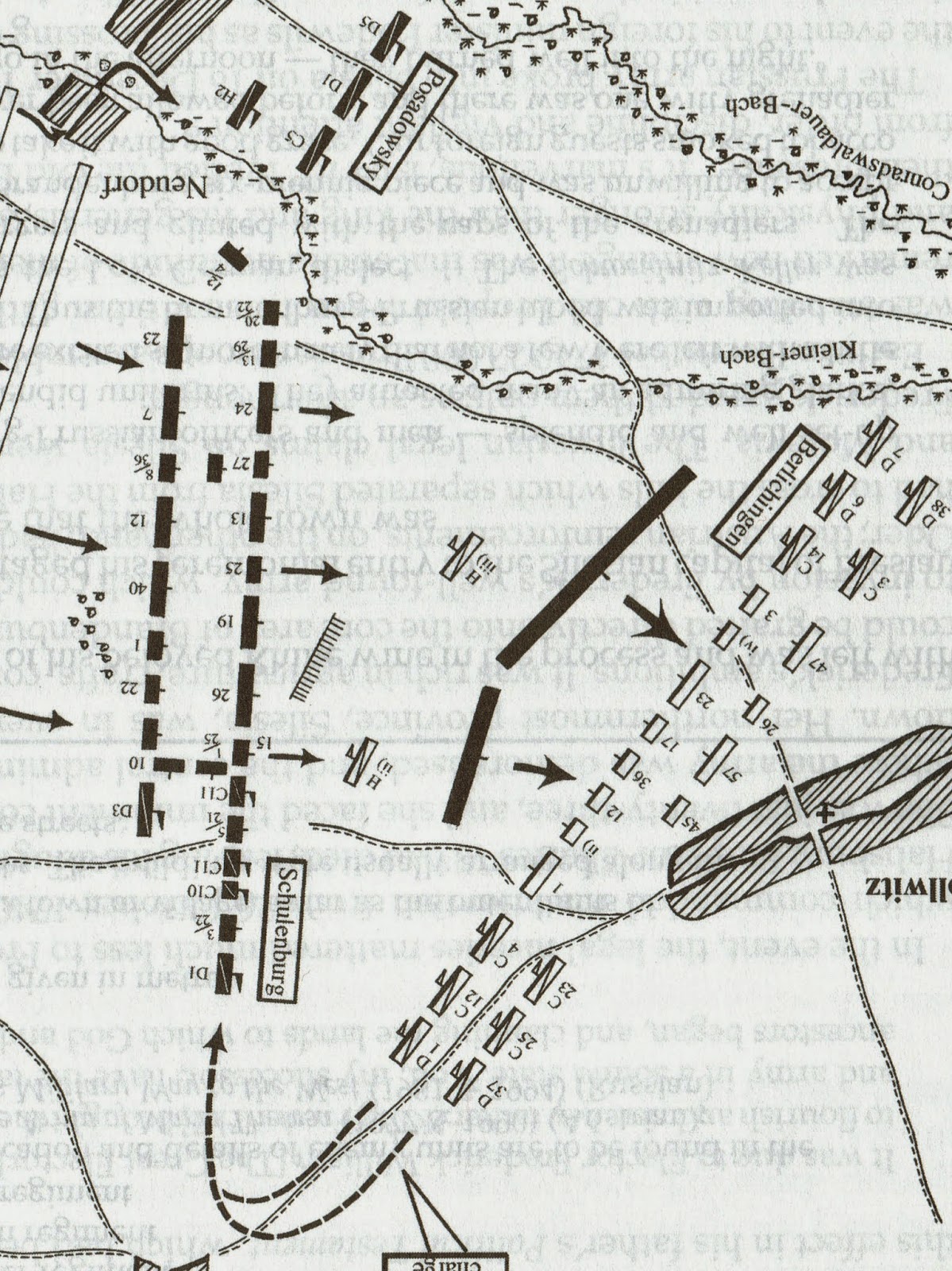 I chose Mollwitz as it is a very simple battle, so I could set it up with minimal effort.

This is an extract from 'The Army of Frederick The Great' by Christopher Duffy.
(It is upside down to tie in with the photos below - honest!)

I decided that we should start with the two armies in their historical layouts.


I organised this game in a rush, so just did a very quick conversion of the figures in Duffy's books, and scaled it to give an infantry line  which covered the right amount of the map/table. This ended up with  simple one unit for each 1000 men.


I classed almost everything as 'trained' (I was in a rush), with just two exceptions:


The next time I play this I will put a bit more thought into it.


I did make an effort to reflect the characteristics of the two forces using the following 'National Advantages':


The armies were set up in near historical positions, with a unit of grenadiers interleaved with the right wing cavalry, which historically caused problems. 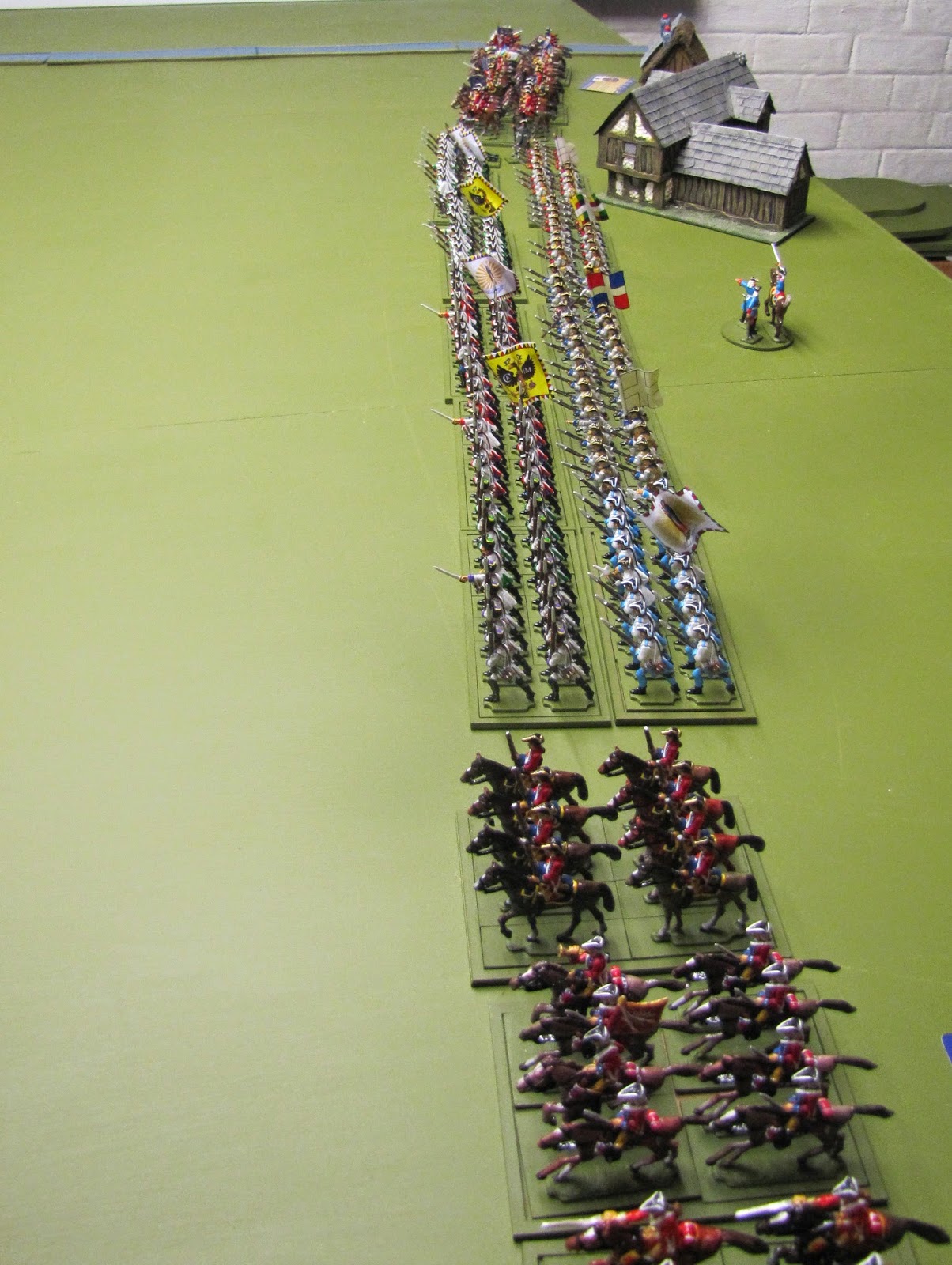 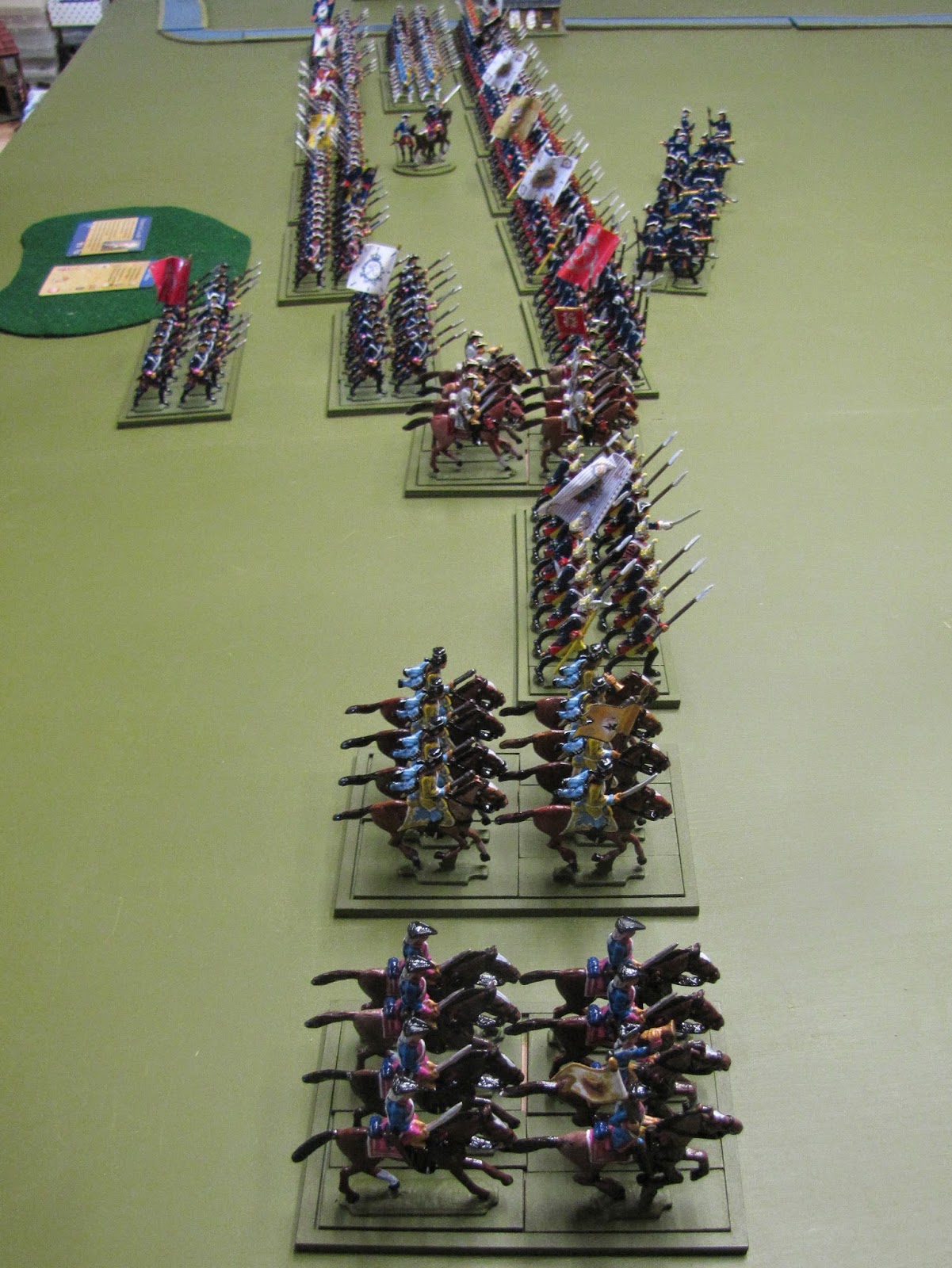 All of the cavalry are old HE, Karoliner or Rossbach figures, many of them French. 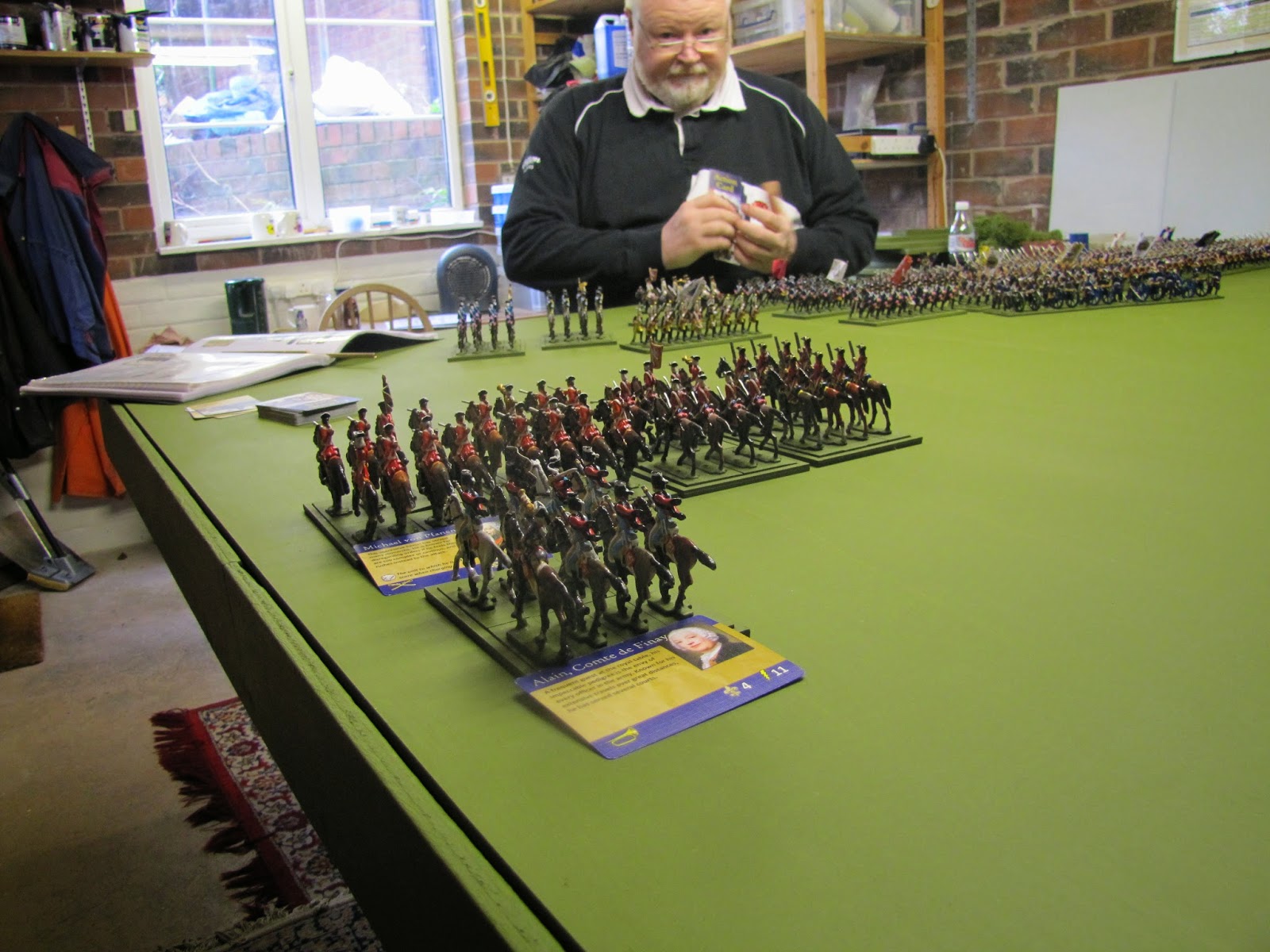 The battle started with Austrian cavalry making an attack down their left flank. I loaded the game in this area by giving the force a couple of notables to allow them to move and charge easier. 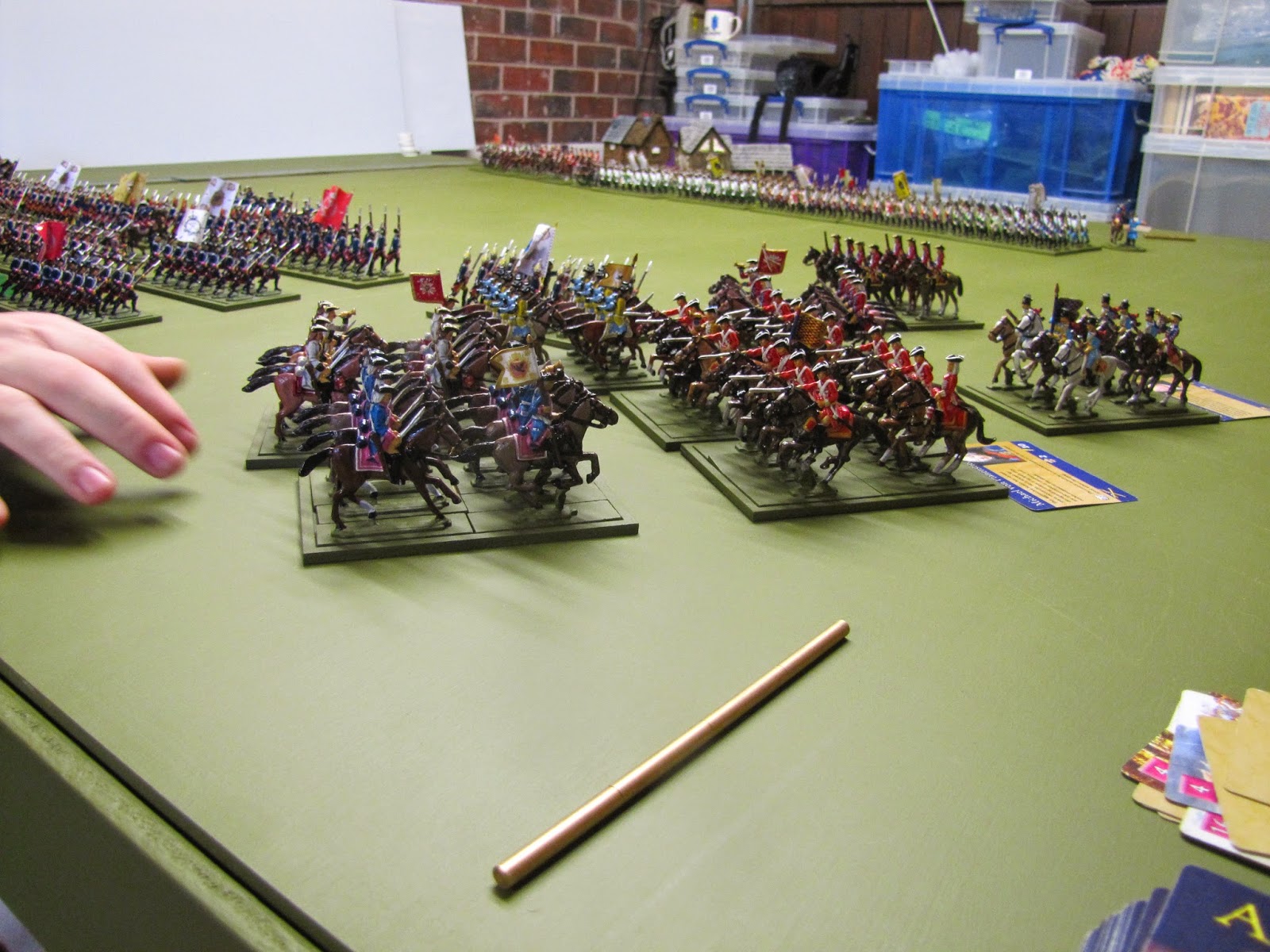 The Austrian cavalry charged into the fray, and with with a a useful hand of cards (two 'stirrups in' cards, which give advantage to charging cavalry), and the 'Cavaliers' advantage (plus some luck dice) soon add the upper hand. 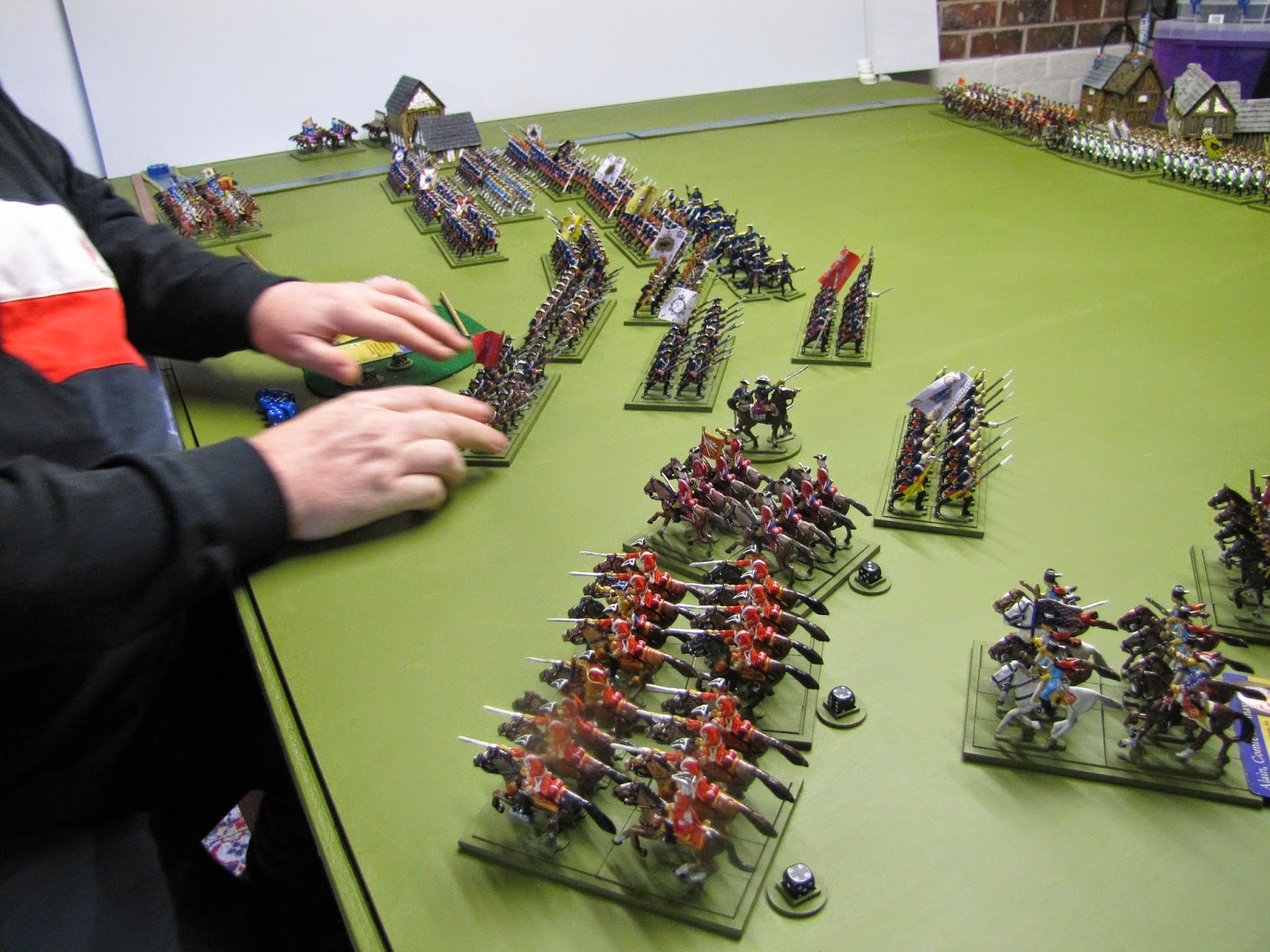 The Prussian cavalry were totally destroyed, however the Austrian cavalry were shot. The dice behind the units are casualties, five hits kills the unit, so you can see they are in no position to exploit their success. 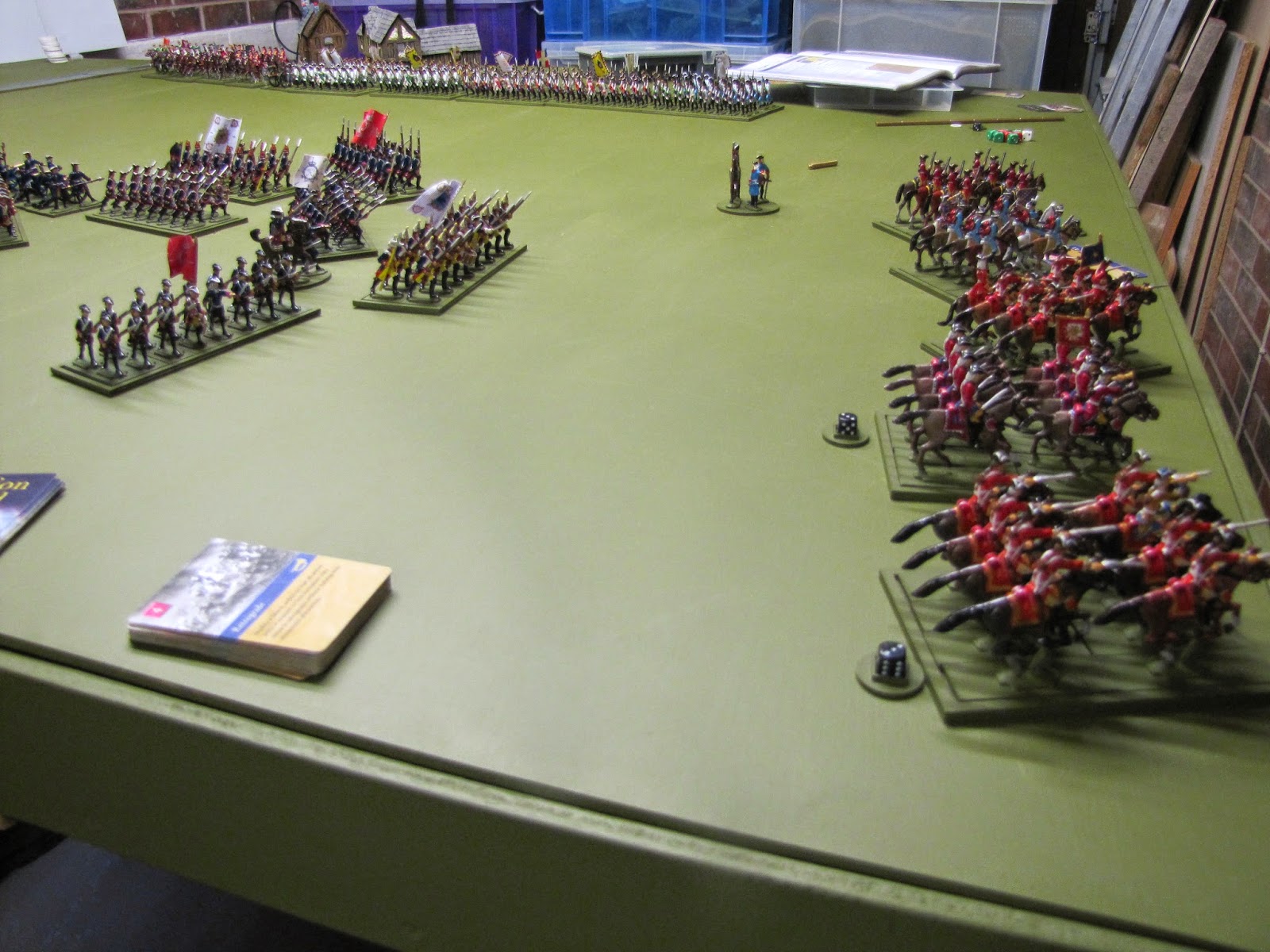 The Prussian right wing cavalry had gained time for their right wing infantry to redeploy and link up with the isolated grenadier unit. In Maurice cavalry is only effective against infantry when the cavalry is fresh, and the infantry carrying some hits - so time to beat a hasty retreat. 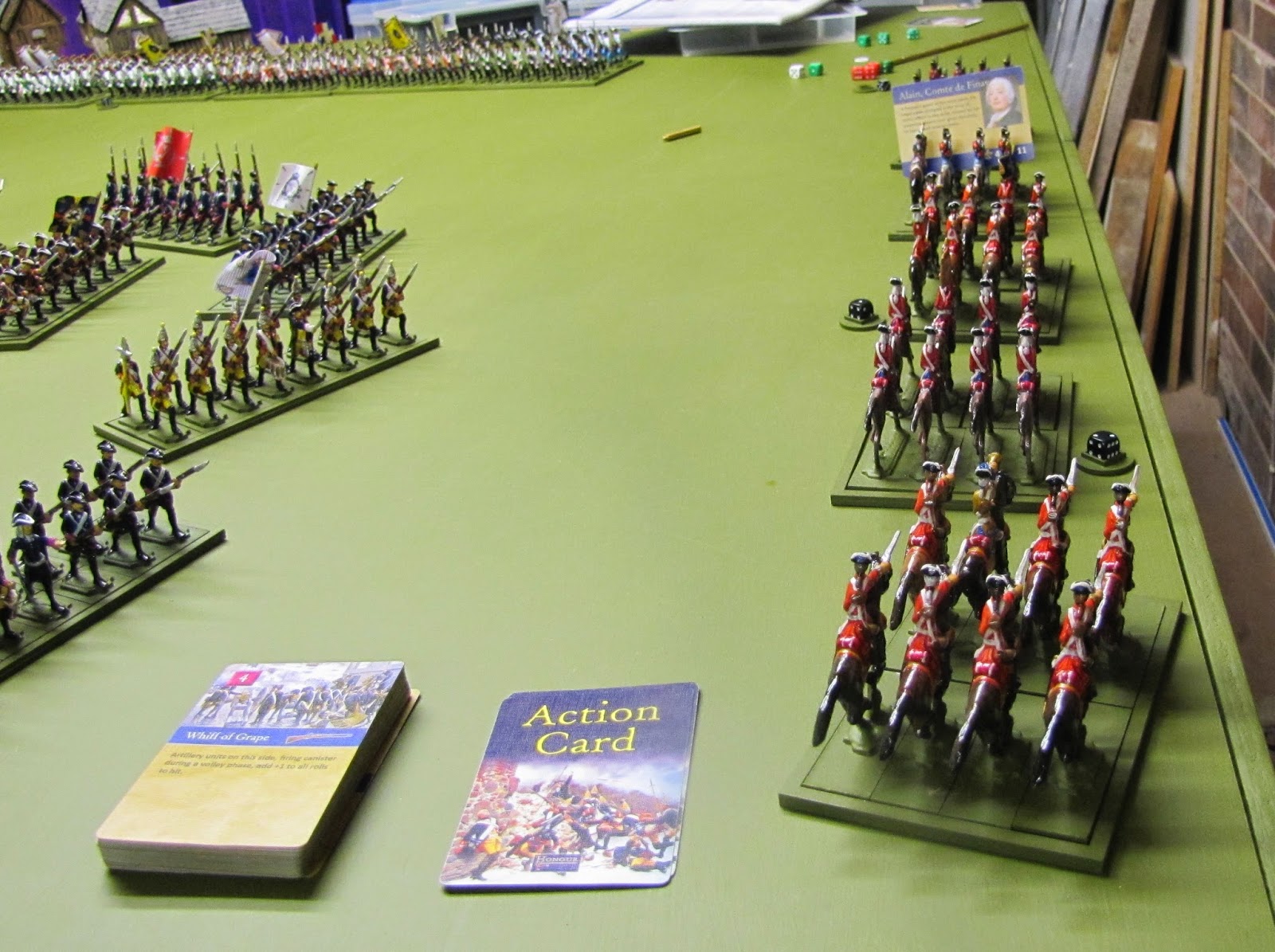 Unfortunately they then became victim of the table edge syndrome, the Prussian infantry could pin them against the edge, so only option was to head back to their own lines. Rather than move away from the infantry - or better still go around the back! 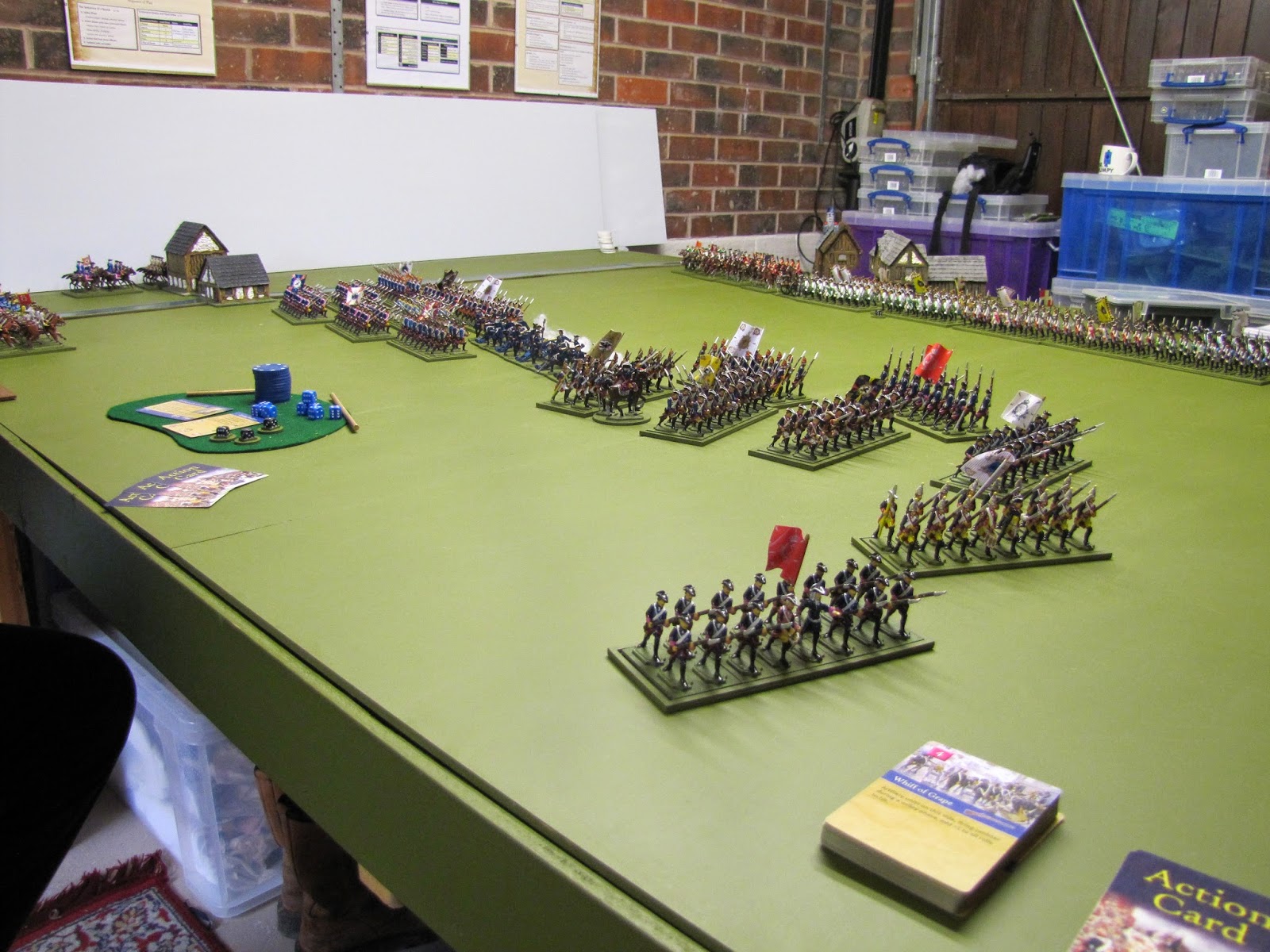 Prussian infantry then filled the full width of the table and attacked the Austrian centre. The attack came on in two divisions, this made it far less effective. The split was due to two reasons, the cavalry attack had made the infantry drift to the right, and to avoid masking the artillery battery in the centre. 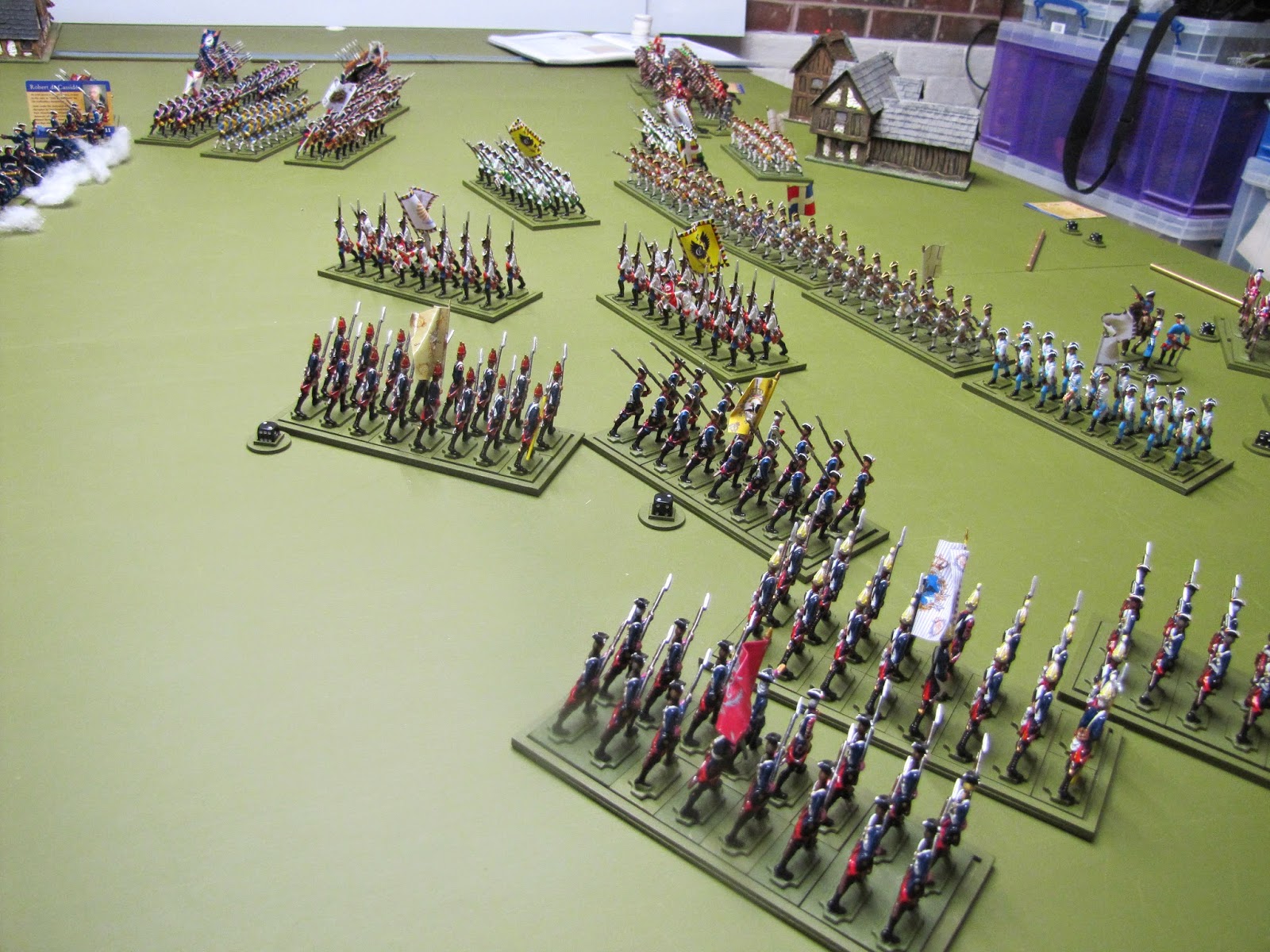 Eventually the Austrian infantry were able to hold off the Prussians, and caused enough casualties on the attacking Prussians to win the battle.

The Maurice card system was very effective at breaking the battle down into a series of actions, first the Austrian cavalry attack on the flank, and then the advance of the Prussian infantry once the cavalry had been neutralised. This is a far more realistic sequence than the usual everyone attack at once - or having to write special rules to prevent everyone jumping off at the same time.

We intend to play this again, and I will put a bit more thought into the armies to better differentiate the troop types - perhaps make the cuirassiers elite?

Also, I think I will refight it with less units, and leave the Prussian right a little more open.

And everyone have a good Christmas.


Which rules do we use?

The new PA range are a development of original HE semi-flats, which were the work of Holger Eriksson, who also sculpted the Spencer Smith range of figure. These figures feature prominently in classic wargames books such as ‘The War Game’ by Charles Grant, or ‘Charge’ by Brig. P Young & Lt. Col J.P Lawford. Both of these books are still available in paperback reprint - but if you can afford it treat yourself to a second hand hardbacks - they look so much better on the bookshelf!

Both of these use large units, which certainly look very impressive, however they are a lot of work - and you will need a big table!


We dallied with 'old school' rules for a couple of years, but found them 'hard work', needing a lot of time, and we rarely finished a game - so we don't use them much now. The thing is though that I really do want them to work - perhaps I just need opponents with lots of time on their hands?

Having given the 'old school' a fighting chance we decided to go for more recent rule sets.


Initially we used  ‘Field of Battle’ (FoB) by Brent Oman; we already used them (along with 'Shako') for 15mm Napoleonics, and they work fine with the semi flats. These are an interesting set of rules based on the Piquet rules system and use a variable move sequence which is card driven.


More recently we have been using  'Maurice’ by Sam Mustafa; these are a fun set, and again the action is card driven. They also contain a simple campaign system. A ‘lite’ version of Maurice is available for free download from:
http://www.sammustafa.com/honour/downloads/

Both sets have their places, Maurice is best for just two players, whereas FoB can be used with multiple players on each side. 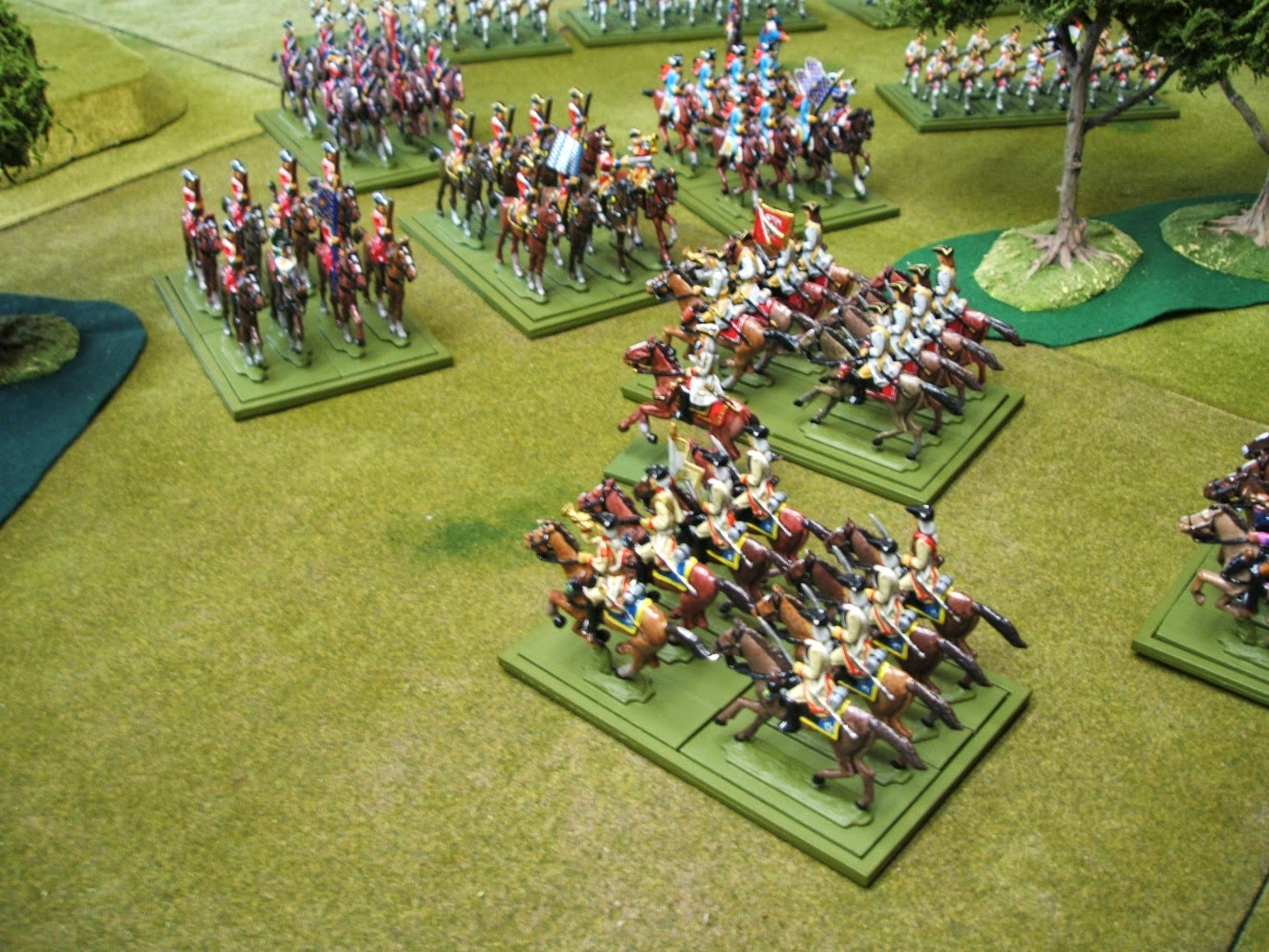 Both of these rule-sets work well with small units of 16 infantry and 8 cavalry, and can still look very impressive. This could be either Maurice or FoB - the troop scale and basing is the same.


There are many other sets available - we have settled on these two.........for now.

Basing and organising figures into units


You might think that 40mm figures need a big table to play on, but that isn't really the case. As the figures are semi-flats,  the width is no more than full-round 28mm figures, so a 20mm  wide base works well for both infantry and cavalry. The bases do need to be a bit deeper than for 28mm, and we have found 30mm for infantry and 60mm for the cavalry to be about right. This is a period of linear warfare with relatively shallow battle lines, so the deeper bases aren't really a problem. The figures have been designed to fit neatly into units on these base sizes.

After a lot of heart searching, I decided to base up the figures so that they could be used either as a single 32 man unit...... 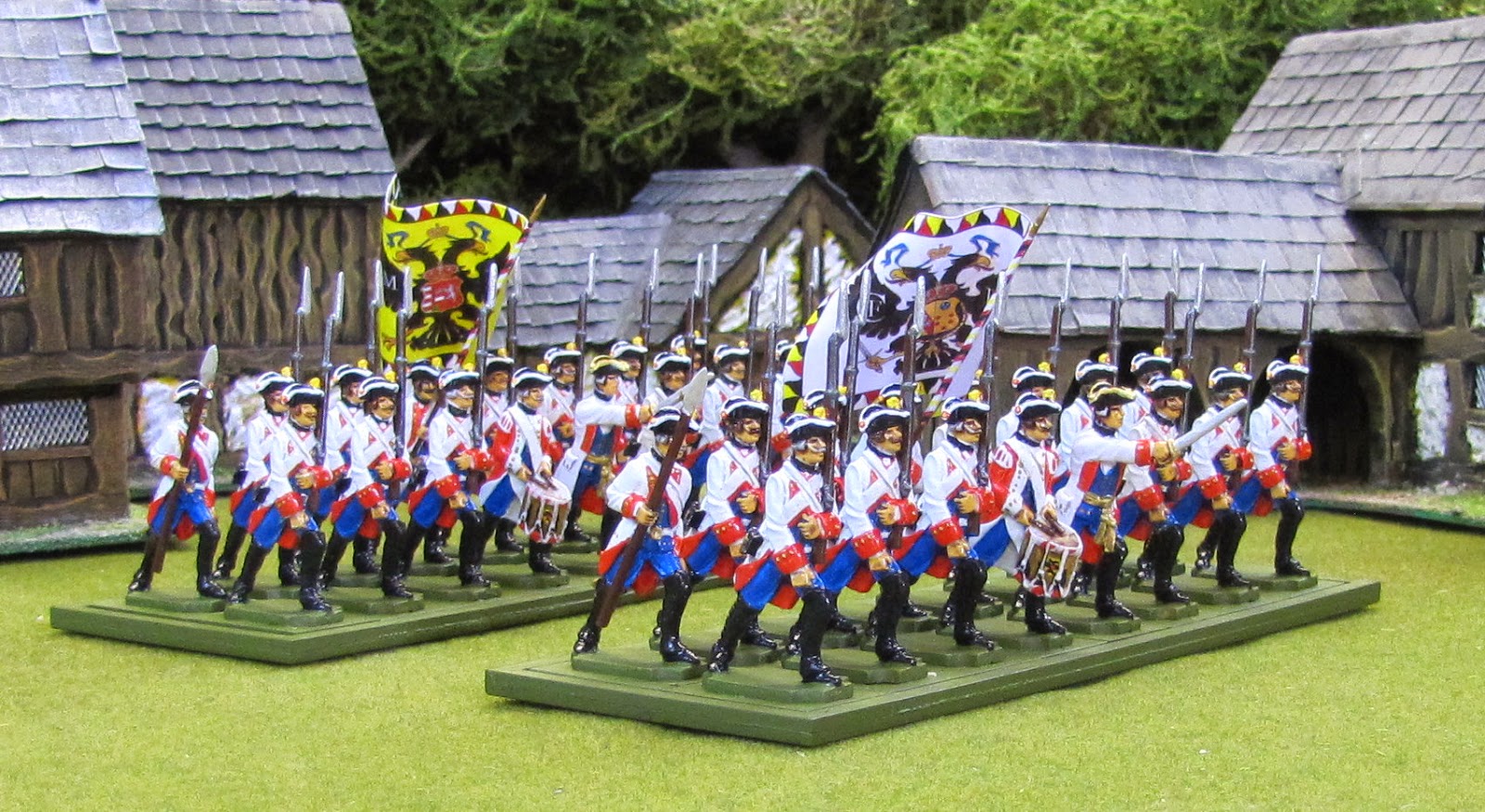 
Sorry the blog has been quiet for a while, a combination of a busy time at work, a quiet spell on figure production..........and us having a new puppy!

I had a long chat with Chris Tubb (the sculptor) a few days ago to discuss the plans for the Russians, and also the range as a whole. He confirmed that Prince August are committed to the range, however production of new moulds will probably continue to be relatively slow, as this is just one of many projects he is working on. The intention is to get the Prussians, Austrians and Russians finished (infantry, cavalry, lights and  artillery), and then move on to the British and French, provided the demand is still there.

Next up will be the Russian infantry, these were discussed back in April (no point rushing - these are 'Old School' after all), and the proposed four moulds below hopefully cover many of the things we discussed back then.

The plan is for all of the bodies to be musketeers (the grenadiers should have a belt pouch, however this is barely visible on the figures so not worth additional moulds - it can be stuck on or painted if necessary). Similarly it is not currently planned to produce any Observation Corps figures, By concentrating on the musketeers we can provide bodies for advancing and march attack in both summer and winter/parade uniforms. There will also be some new command figures in poses similar to those in the Hungarians, these can (with a bit of work) be used to add variety in the Prussians and Austrians.The provisional listing (it depends what will fit in the moulds) is:

Below are the greens for the first 3 figures. The officer looks fine, but the waistcoat on the drummer and infantryman is a bit too long, so will be shortened. 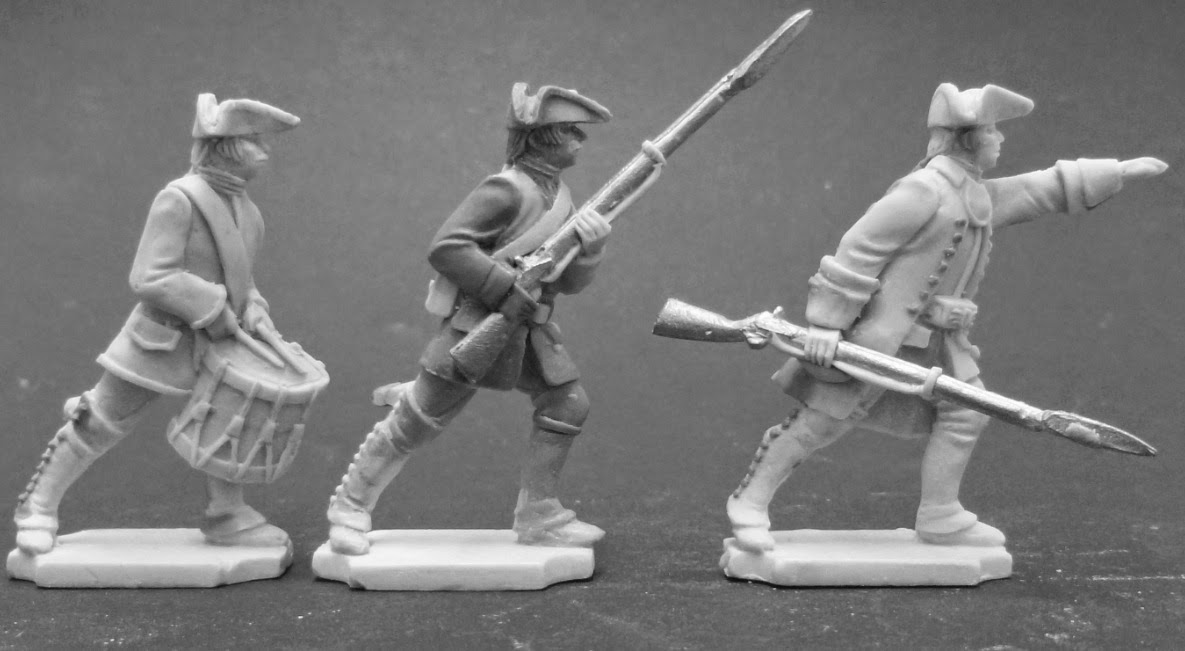 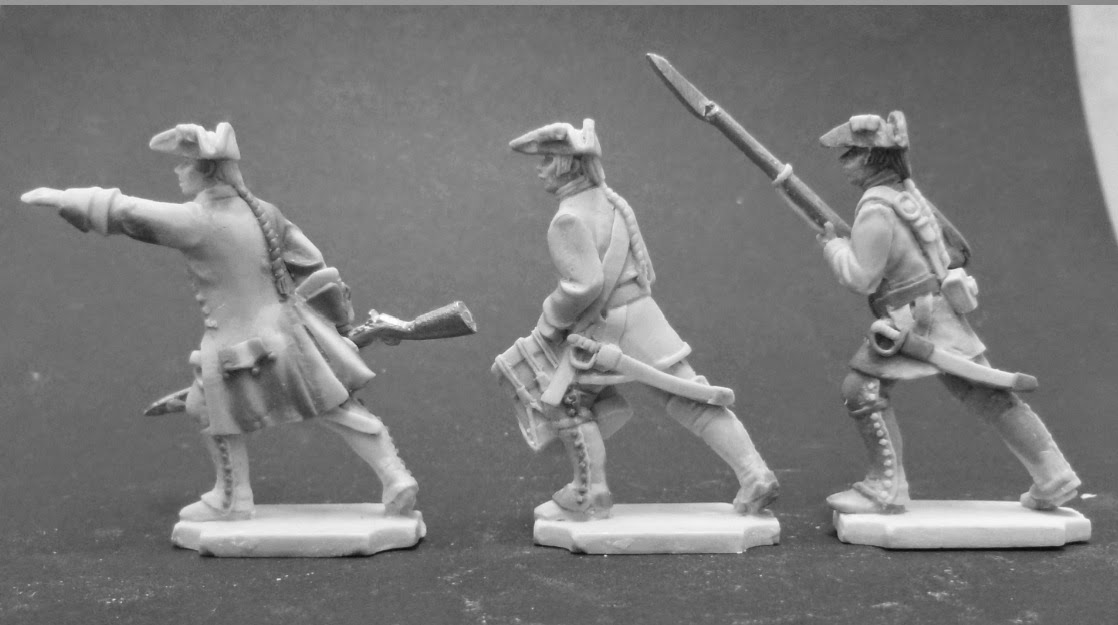 Once the Russians infantry are done - Austrian cuirassiers!

One point I really would like feedback on is the plan to have the march attack figure in winter uniform in a more upright pose - would it look OK with the more active command figures?