Prince August are about to issue their new catalogue, which you can find on the link below:

There is a lot of emphasis on the SYW range, which I think shows a high level of commitment to getting the range finished.

PA are also showing that they are genuinely trying to produce a flexible modular range of figures suitable for use by both wargamers and their traditional casters. The wargaming text is really aimed at beginners. It is based on something I wrote for them many months ago, some errors have crept in which I did not get chance to 'cut off at the pass' (I only really have contact with the sculptor), but I think they are on the right track. 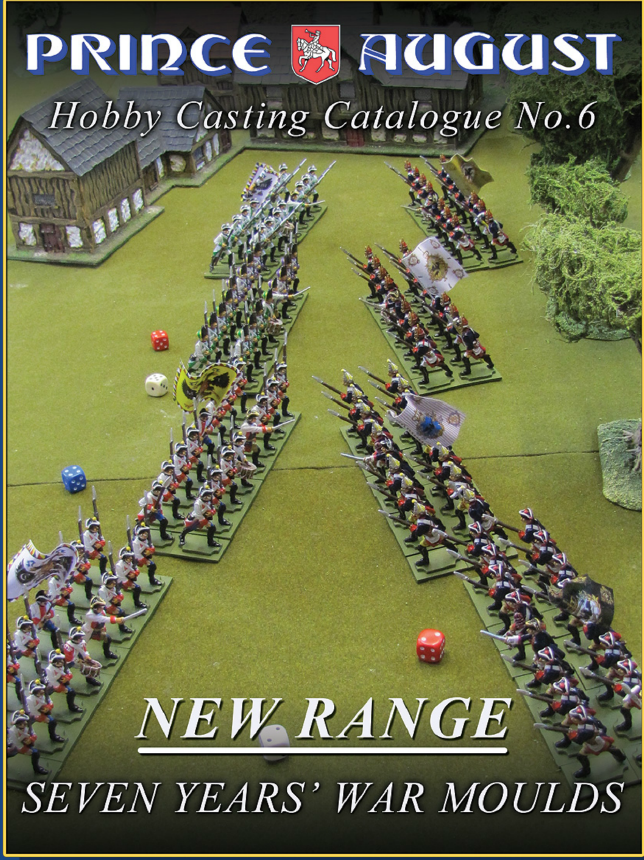 The wargaming shots are mine, unfortunately there is not a lot can be done with just 8 small units of infantry (which is all I have painted), and no artillery, cavalry, light troops or staff officers, which are not yet released - but I do think they will come in the near future. (The figures do actually mix in quite well with the Karoloners, however PA only wanted the new figures in the photos, so just infantry).

To show how the two ranges compare, below is a shot of a game with the new SYW and Karoliners together. The SYW in the centre are crisper, more detailed, and a little larger (but I am using pre-production moulds which do cast a bit bigger), but probably no more so than the Karoliner marching grenadiers. We have no problem using them together, however having said that I think it in future I will only cast Karoliners if a SYW is not available. 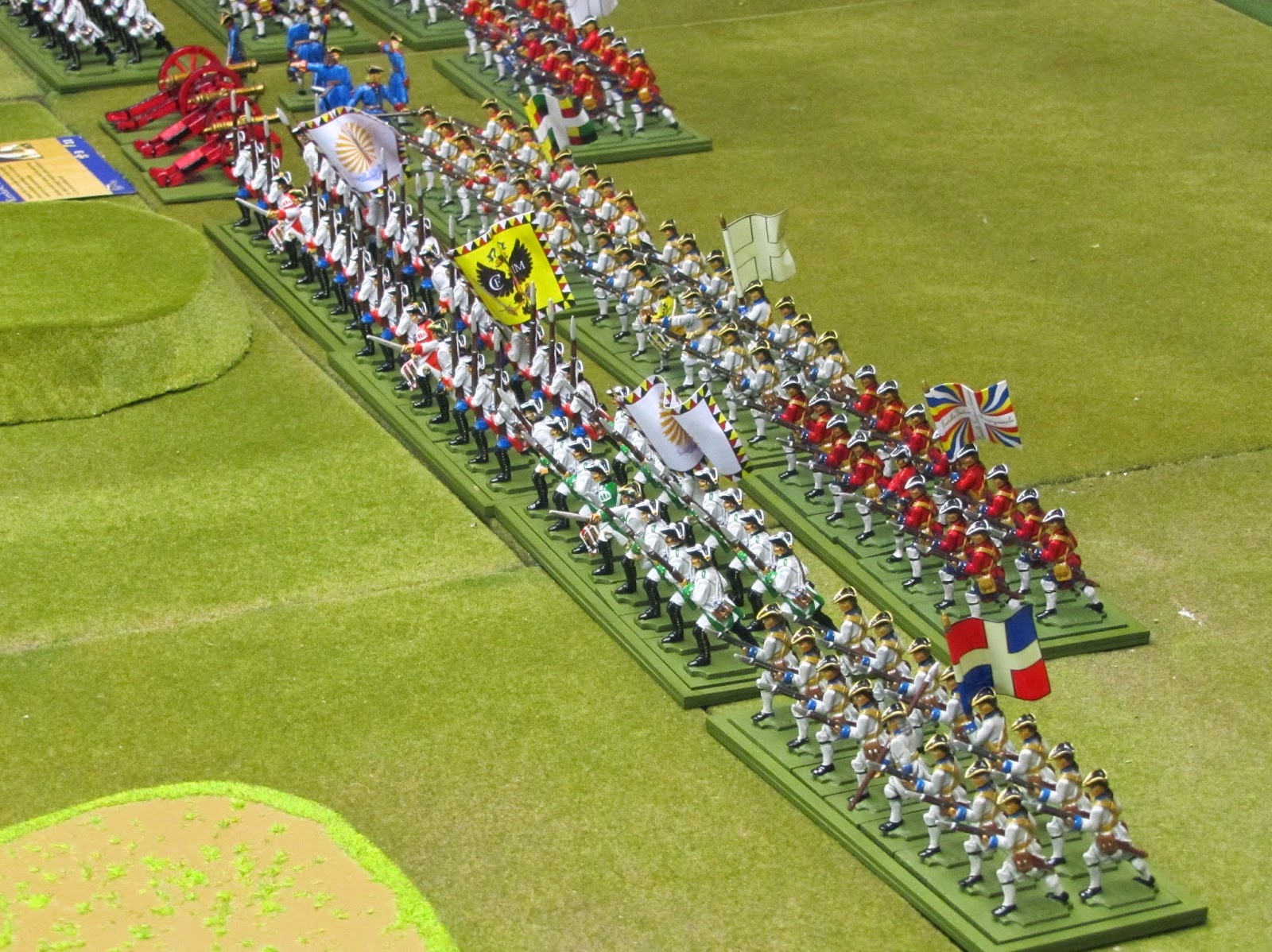 Prince August have now released the next two moulds in the series.

This is a bit of a lazy blog painting wise as all I have done is downloaded the pictures from from the PA website. I did however cast the figures (from pre-production moulds), which were then painted by Richard Hattersley, a regular gaming opponent, so I don't feel too guilty.

It is also worth adding that these new moulds are more detailed than the earlier three, with detail such as musket slings and gaiter buttons added.

I have discussed both of these moulds in the past, but now they are out I will fill in a bit more detail.

This mould was added as something of an afterthought to fill some gaps in the Prussian range (sculpting and design wise actually came after the Austrian mould). 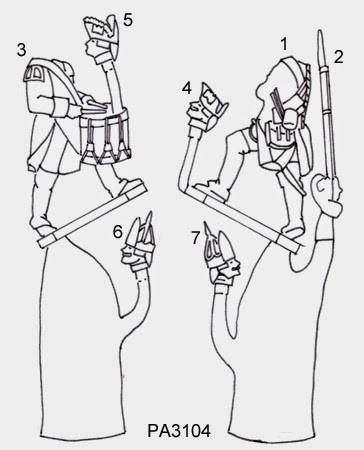 The sculptor did not originally think that a march attack figure could be fitted into a mould due to the length of the figure. Eventually he hit upon the idea of casting the musket and arm separately, a bit more assembly work, but it does produce the classic march attack pose. Obviously although labelled as 'guard', it is suitable for use as musketeers, fusiliers, grenadiers.............

The fusilier drummer is is a rework of the the earlier one, but without the lace on the arms. It was really intended to be used more for the Austrian infantry than the Prussian fusiliers, but PA did not want to mix an 'Austrian' and 'Prussian' in the same mould - so it's 'Prussian'.

The fusilier heads are added so that that there is no longer a need to cast all those NCOs to get the heads (there was a mix up in 3103 which should have had a fusilier head in it).

And last but not least guard heads for officers and men with fancy hat lace to make up the guard battalions (many fusilier officers could also use this head) - and also make it more attractive marketing wise. 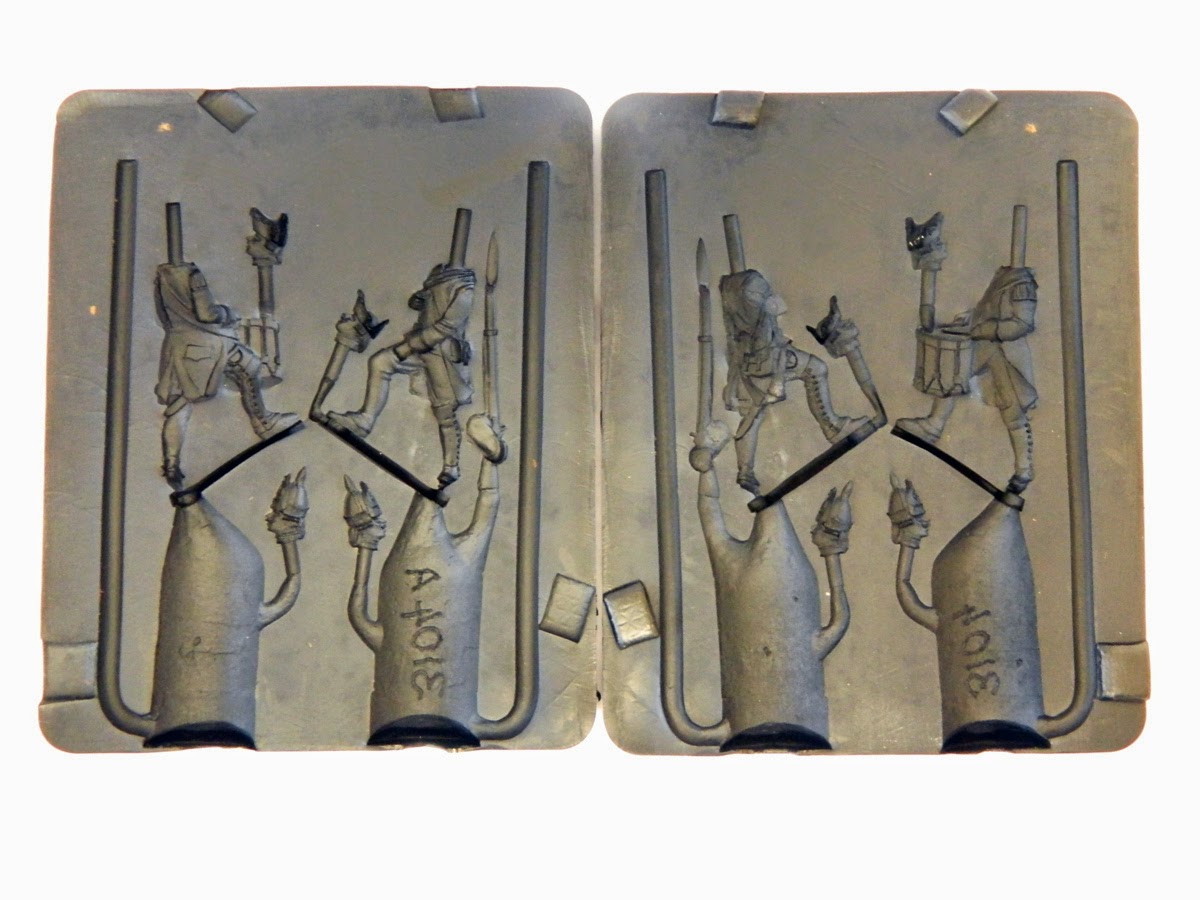 As you can see it's quite a squeeze to get it all in.

And some of Richard's brushwork 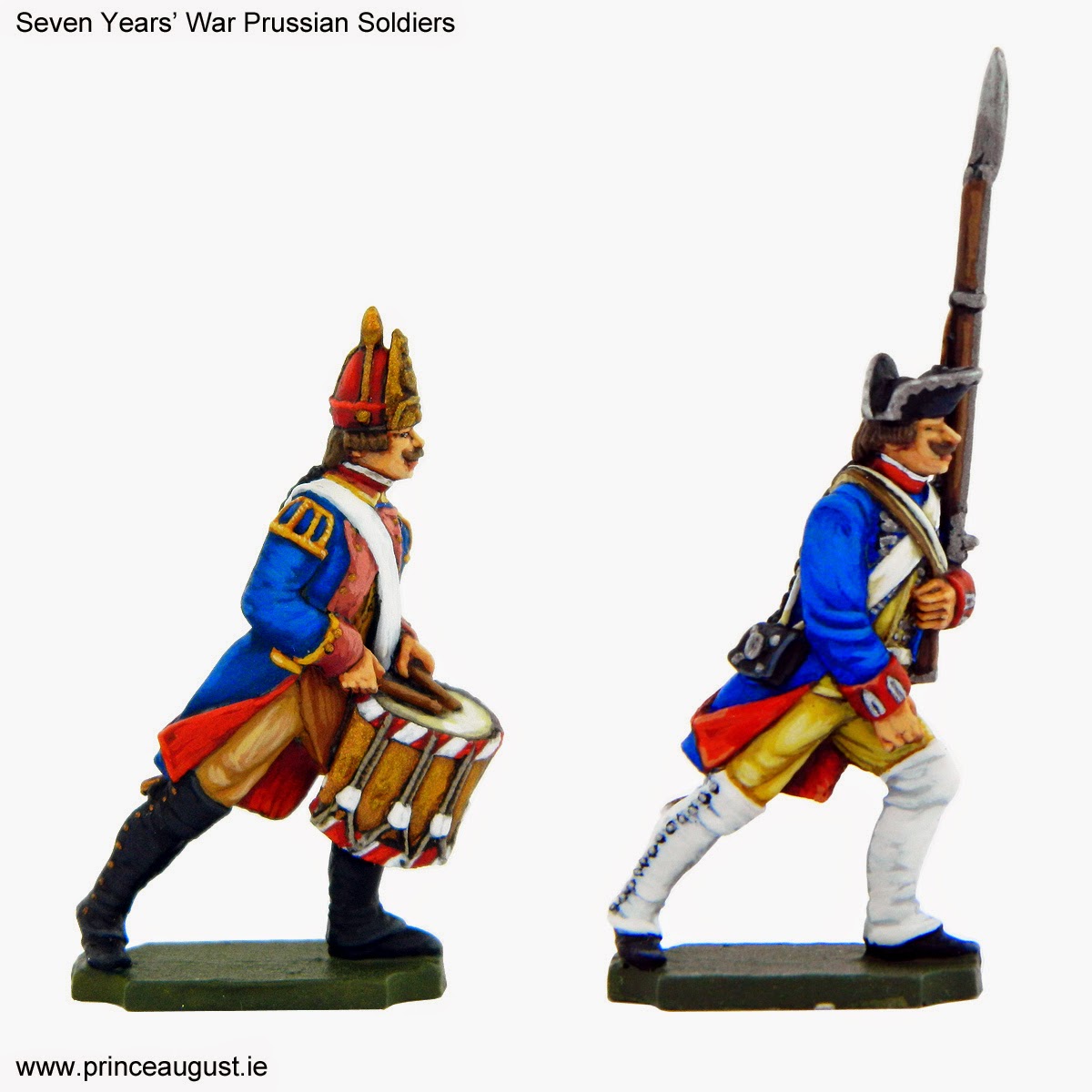 
As discussed some time ago, the Austrian (German) infantry posed a bit of a tricky one for us. In the end we went for a single mould, taking maximum advantage of the head swapping abilities of this range. 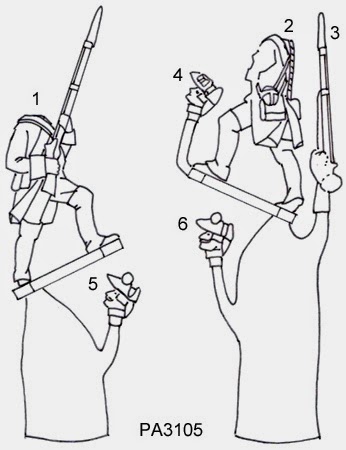 
The bodies are similar to the Prussians, but with without a sword, and with the single Austrian haversack. Two fusilier heads are provided to fit the bodies, and also an Austrian officer's head; these can be used with Prussian moulds 3101 & 3102 to make up the command groups.

And again some completed figures. 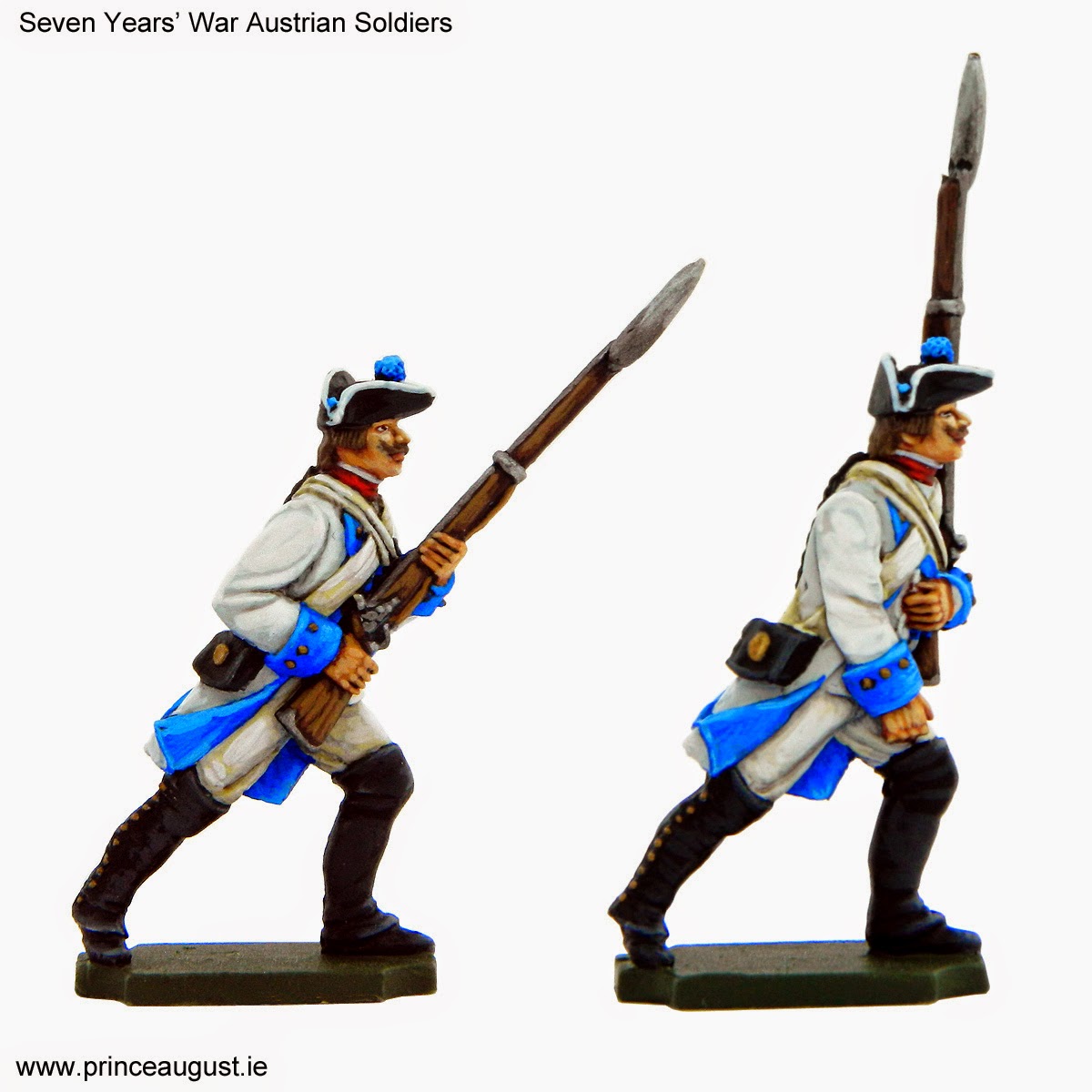 If you want to see them made up into units, using the 'Prussian; commander look back at my postings of 9th & 27 April

And there are now enough troops and poses to start pulling together a couple of decent armies (well the infantry anyway). 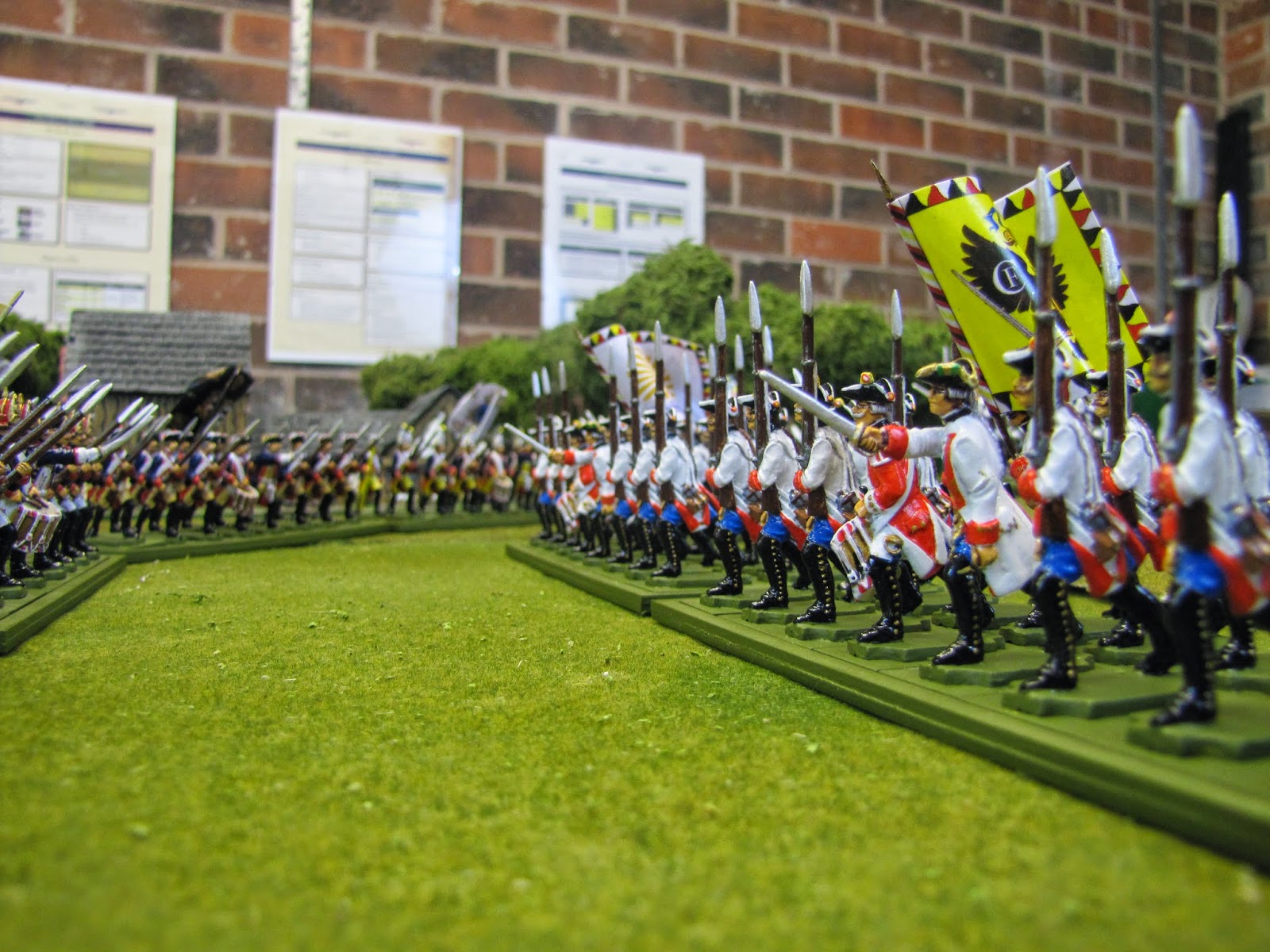 It isn't yet possible to do grenadiers, but the wait should't be too long, a suitable head with a bearskin will be available in the forthcoming Hungarian moulds,

As always keep the comments coming!

Another look at the Hungarians

First of all another look at the Hungarian officer; the coat lace has now been corrected and more added to the cuffs.

With the tricorn he can command fusiliers, the right hand can accept different weapons so could have the sword as shown, or a pole arm. Also as with all the figures in the range the figure has a separate head, so for the grenadiers he could wear a bearskin and carry the sword or musket. 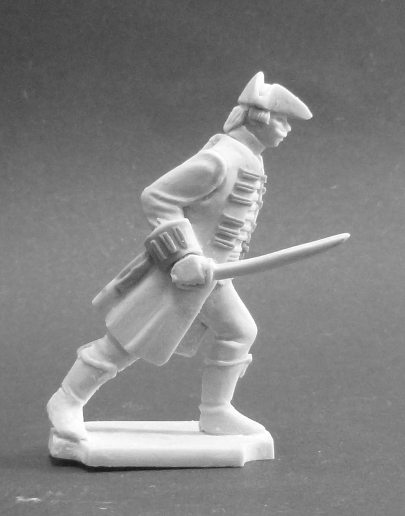 In the Hungarians there will also be a new pose for the NCO figure, this has been made more animated than the Prussian offering. The left hand is raised to encourage (push) the troops forward, as with the officer, he could wear a bearskin and carry a musket to help command the grenadiers. 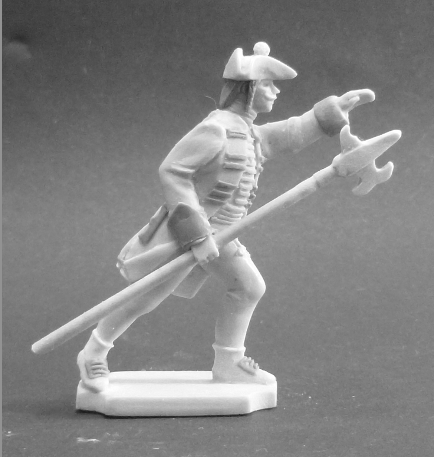 Here is a photo of some of the forthcoming releases painted by Richard Hattersley (I avoid showing his figures as he puts me to shame). 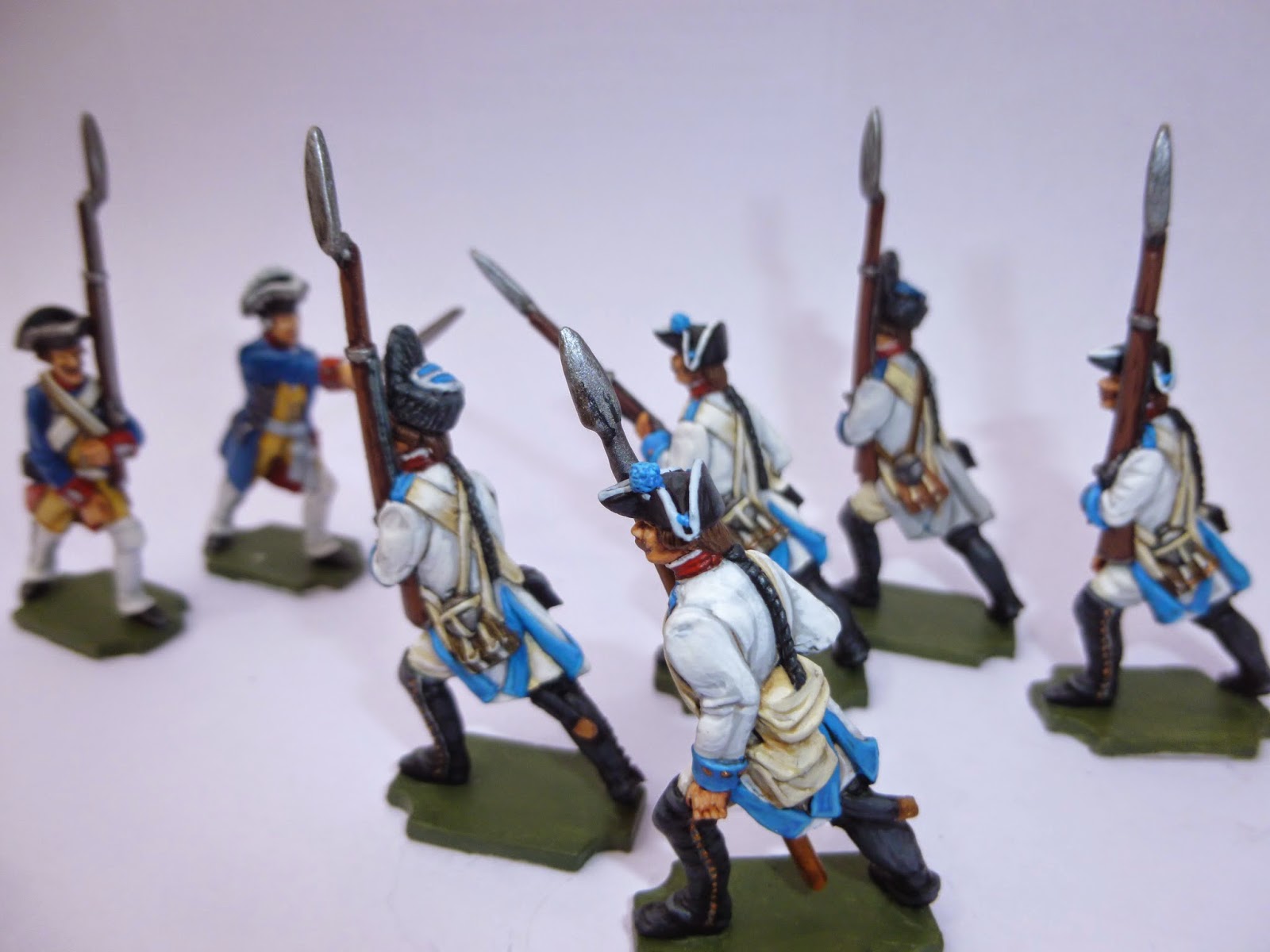