I'm still here - just resting!  Sorry I have not added anything for a while - to be quite honest my gaming interests have been elsewhere, mostly 15mm Napoleonics (Commands and Colors) and 28mm WW2 (Chain of Command), and with no resent releases fro Prince August I have not had anything to report, however.........


Steven Marthinsen has kindly sent me some more photos of progress on his SYW project - it is nice to see that the moulds are being used and enjoyed. 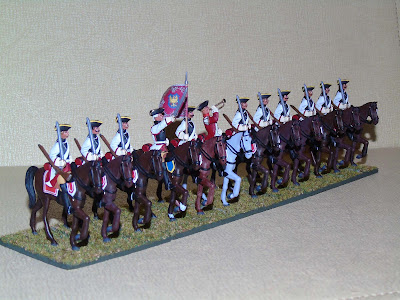 Steven sent me a few comments about casting these, which I will pretty much just repeat:

"....the casting was pretty easy overall.  The only locations that gave me any difficulty were the harnessing bit below the horse's mouth and the carbine.  Moving the clamps around before pouring fixed most issues as I have always found that a loose grip on the mold allowing air to escape was better than a tight grip.  This does create a bit of flash but that is easily cut away.  Assembly was straight forward and fit reasonable.  About the only concern I have is that when I complete the regiment of 12 figures I mount them three to a base.  This is a heavy base given all the metal and the fact that they are a bit over-sized.  To their credit, however, they are strong figures and well attached to their bases; some of the older Rossbach cuirassiers have relatively weak connections to their bases." 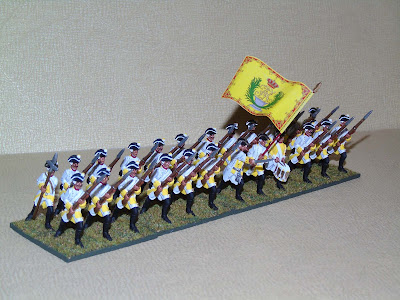 It would be nice to see photos of any other projects which are underway.

Hopefully we will see something more from Prince August in the not too distant future if I hear anything I will let you know.
Posted by SteveM at Wednesday, October 17, 2018 6 comments: