I pinched this from the 'Tin Soldiering On' blog.

AN UPDATE ON GOOGLE FRIEND CONNECT

As part of this plan, starting the week of January 11, we'll remove the ability for people with Twitter, Yahoo, Orkut or other OpenId providers to sign in to Google Friend Connect and follow blogs. At the same time, we'll remove non-Google Account profiles so you may see a decrease in your blog follower count.

We know how important followers are to all bloggers, but we believe this change will improve the experience for both you and your readers.

My apologies for any typos and spelling errors on names and places (I can't pronounce them anyway). I noticed a lot in the final read through, but it really is not worth going back editing photos.


As discussed in the last post the game was set up with about half of the Austrian forces deployed on the hills, and the rest were marching across the rear, and not deployed (which was good as I was out of 'white' battalions).

The Prussians were mostly marching down the Kaiserstrasse. with just Schonaich's cavalry deployed to protect against Stampach's cavalry.

(Ooops - I have labelled 'Oak Wood' wrong - it should be the one in the distance!)

None of the players were SYW  'experts', and luckily none knew much about the battle. I gave them a quick run down of the prelude to the battle, explained that the whole board was swarming with grenz skirmishers, but that I would not represent them (it would slow down the game - and I have no figures yet - soon?). I did not mention that some of the villages were garrisoned, as Frederick did not think of it!

The two commanders were then asked to write simple orders for their commands.


East of Kutlire Nadasdy's 6 units of hussars made a spirited attack on Zieten's 7 units of Prussian counterparts. (As you can see we are having to improvise with the cavalry, these should nearly all be hussars. We don't have enough hussar figures, as we have been waiting for the new ones.)


Unfortunately for the Austrians the superior tactics of the Prussians (dice) resulted in a comprehensive defeat, and the 4 remaining units went scampering back towards the gap between Oak Wood and Radowesnitz; leaving the 6 remaining Prussian units in control of the plain.


In the background can be seen Hulsen's infantry ready to exploit Zieten's sucess.


Yet again superior Prussian discipline (dice) allows them to defeat their Austrian counterparts and clear the hill.

However behind the hill is Serbellini with another to units each of Austrian Cuirassiers and dragoons, so the Prussian attack ran out of steam and Sebellini retook the hill.


The Prussian attack on the centre developed at the same time as Schonaich's cavalry attack, aimed at Andlau's infantry (on Przerovky Hill) and the grenadier reserve (on Krzeczor Hill), along with their two supporting heavy batteries. On the right can be seen Serbellini's cavalry back in possession of Pobertz Hill.


A general view of the battlefield at that time, as can be seen, the main Prussian attacks are developing, but the left wing flank attack has stalled.


Hulsen has delayed the attack on the main left flank attack, and committed his whole brigade to clear the grenze from Kultire, and also held back Zieten in support.


Tresckow and Bevern made it up into a firefight with the Austrians on the ridge, however the attack ran out of steam (it did kill off the grenadiers), and when the Prussians realised there were two more brigades of infantry in reserve behind the ridge they decided to call off the attack. (Sorry about photo quality, it is a zoom into a longer shot).


Over to the west of the fiend Pennavaire rashly decides to try and break through the infantry of Puebla who are ensconced on Pobortz Hill with his three units of cuirassiers (one elite) and two of dragoons.


We lost count of the number of charges the elite cuirassiers made but due to the skill of both commanders (dice) the infantry held firm, but the cavalry took few casualties (must have run out of powder). They were still attacking when we finished playing!


After clearing the grenz out of Kultire Hulsen and Zieten finally put into motion the attack by the Prussian right flank.


The game started to run out of steam about 14:30, we played on for another hour or so, but as players started to leave, I took over playing rather than 'umpiring' and only took occasional photos. The last photo I took was at 15:20, showing Bervern's infantry cresting Pobortz Hill, and seeing the massed Austrian reserves behind - enough is enough! 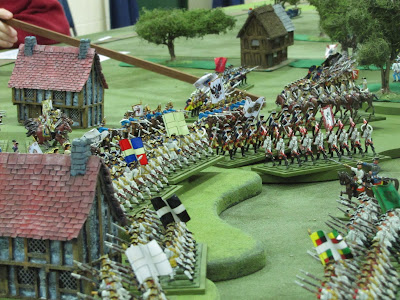 The Prussian attacks in the centre ran out of steam before their left hook got into motion, delaying to drive the grenz out of Kutlire really lost the Prussians any chance of success. Also, the attacks on the centre should have delayed to allow Hulsen & Zieten to get moving.

The Austrians were cautious with their reserve infantry, and only redeployed Wied to the right, keeping Sincere and Stahemberg behind Puebla and Andlau respectively, one of them should have been enough. If Hulsen had attacked earlier there is a good chance that the Prussians could have caused serious damage. But as in the actual battle, the Prussians really did not have much hope, as Daun could observe the Prussian flank march, and had the advantage of interior lines to redeploy his forces.

A thoroughly enjoyable game, and the rules worked well, giving a very realistic result. I will use them again for large battles.

Back to work tomorrow!


We have just had an enjoyable day re fighting the Battle of Kolin using the 40mm semi flats. 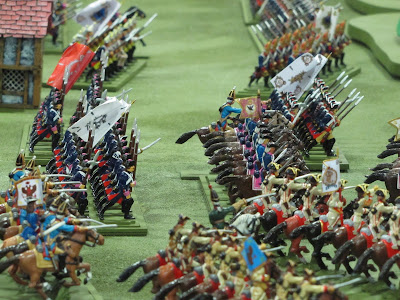 Setting up the Game


This was the club 'Christmas Game', so I decided to put on something big for the occasion. To make the best possible impression I decided to find a battle which would need most/all the 40mm figures we have.

Having added up all the units we could field I decided we could just about fill a 16' or possibly a 20' wide board.

I looked through the books and came to the conclusion that Kolin would fit nicely onto a 16' x 6' table. There is an excellent description of the battle on Jeff Berry's Obscure Battles blog; which also has some useful maps and an order of battle. 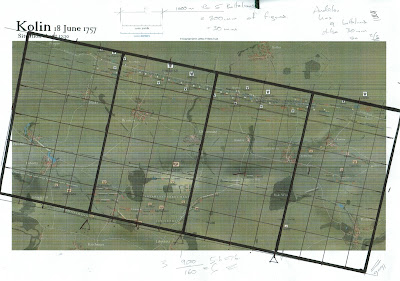 Without going into too much detail, Having decided on the battle and table size, I arrived at the figure scale by looking at the frontages of infantry formations (deployed in line) as shown on the map, and then figured how many 160mm wide wargames units would occupy that same space on the table, which worked out at a 2/3 scale (i.e. 2 wargames units equals 3 actual battalions).

The troop density is about right, and the Prussians strung out in march on the Kaiserstrasse are the right length - so far so good.

Rules - King of the Battlefield

My preference for gaming the period is currently 'Field of Battle', although 'Maurice' are good for two player games. However as this was going to be a big game, with inexperienced players, and limited time I decided to go for the 'King of the Battlefield' rules; a few of us have played a 'practice games' with these rules and they seemed to be just the job for what was wanted.

The rules are actually aimed at 15mm games with lots of units, so we scaled up the distances in proportion to frontages, KoB uses 90mm frontages with moves in inches; whereas my units are on 160mm, so scaling up gives 160/90x25=44mm. I opted for 40mm as the basic distance, and made movement sticks to suit. The choice of 40mm was also influenced by the fact that it put the Kaiserstrasse just out of range of the Austrian artillery on the ridge.

The actual battle was between Prussians and the Austrians, supported by a few units of Saxons. However we don't have enough of those types, so we opted to have the Russians support the Prussians, giving a dark hue, and the Austrians gained support from the French and Saxons, so mainly white.