Join us at Hammerhead Show on Saturday 5th March

With the help of the group I game with, I will be putting on a participation/display game at the Hammerhead Show, which is being held at the Newark Showground on Saturday 5th March.

The game will be based on the Battle of Prague which took place on 6th May 1757. (On the games list it is currently just called '7 Years War', as I had not decided what to do when we sent the entry details). 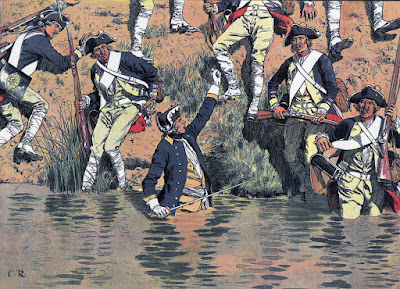 The game will use pretty much all of my Austrian and Prussian figures, with a few Russian cuirassiers giving the Austrians a hand (I wonder how many will notice). The infantry are all from the 'new' SYW range, but as the cavalry moulds are not yet all done, only the dragoons and mounted officers are from the new SYW range, with the hussars and (converted) cuirassiers from the Rossbach and Karoliner ranges

We are using the 'A Gentleman's War' rules, which are a fun set, these have been modified using a simpler move/activation sequence, to make them more suitable for a large participation game - there are still loads of dice to roll!.

As I have said, it will be a participation game, and the rules are easy to pick up and there will be plenty of us around to sort out any problems, so if you can come and push around some toys, throw some dice (there are lots of dice) or just see the figures and have a chat it would be good to see you there.

(Do any of you need any heads for your figures - I have quite a few spare (especially Prussian and Russian Guards), so if you need anything in particular let me know and I will see if I have any and take them to the show?).