The last of the recent batch of moulds - the Mounted Officers.

These are painted to represent Austrian general officers. I have made no attempt to paint the intricate gold lace on the clothing and saddle cloths, as it is beyond my ability/patience, and also would be mostly lost under the high gloss finish (that's my excuse).

I think these are rather splendid gentlemen, worthy to command anyone's armies. 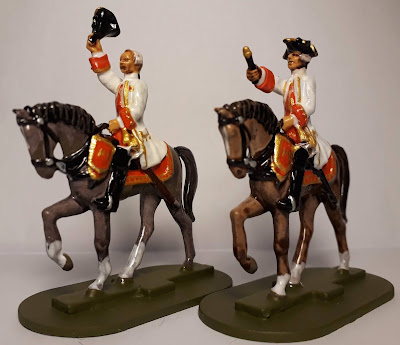 The two arms in the mould allow for waving the hat or pointing with a baton, both very nice poses. I have also been playing with some other options, including the arm pointing with a sword from the dragoon mould. I have tried swapping the other way, adding the arm waving the hat and the bare head on the dragoon officer. None fit perfectly, but look fine with a little filing around the locating lug (I will share them when painted). 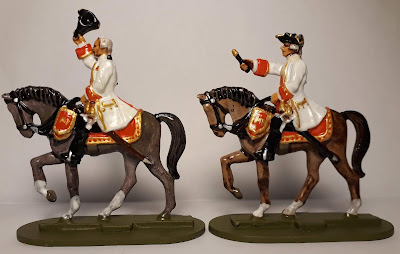 The horse/torso is cast in 'scrap' metal, and generally casts OK, however I had difficulty with the heels on the boots, which I built up with 'green stuff', later figures cast with Model Metal were better. The heads and arms are in Model Metal as they give better detail. The hair on the bare head is a bit smooth but paints up fine, the head with the tricorne is from the Russian officer (I really like that head). 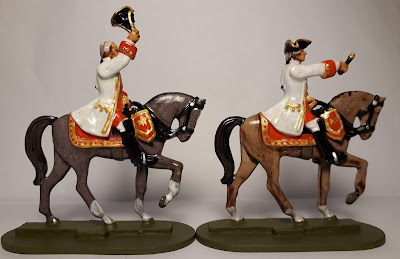 I think with the options of mixing and matching arms from this and the dragoon mould, and the wide range of heads from across the whole range , it should be possible to make quite a varied collection of staff officers (someone has to paint a mounted Russian Guard officer).

As always comments and suggestions welcome.

Following on from the Grenz I have painted a a small 8 man unit of 'double blues'.

The new firing infantry are nice figures, and are designed to mix in with the very first Prussian moulds. The bodies are cast in 'scrap metal' and came out reasonably well, however I used heads from the original Prussian moulds (cast in Model Metal), as I prefer the proportions of the older heads. 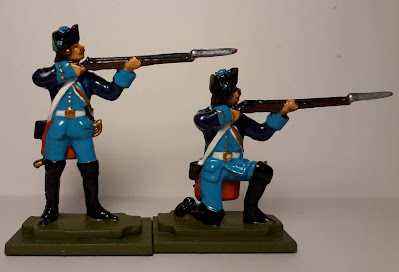 A rear shot, the kit is similar to the original figures, however size is inconsistent, but they look fine mixed together - the chaps will go thirsty as the water bottle is missing. 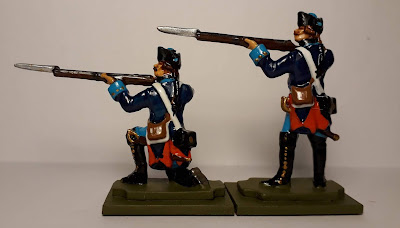 Comparison with the original Prussian infantryman (they have heads from his mold), even with the different kit size they mix fine. 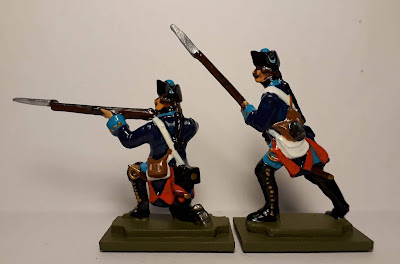 On this occasion I decided to go a little down the 'imagination' route and give the troops the new hornist figure as their musician; these are skirmishing troops in my army, and the horn looks far more appropriate than a historically correct drum (and it used the brand new figure). Using similar logic they are commanded by the new staff officer. - I can see him popping up in all sorts of places. 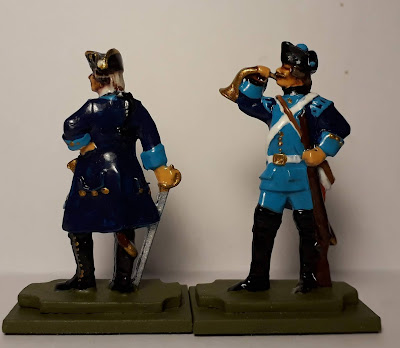 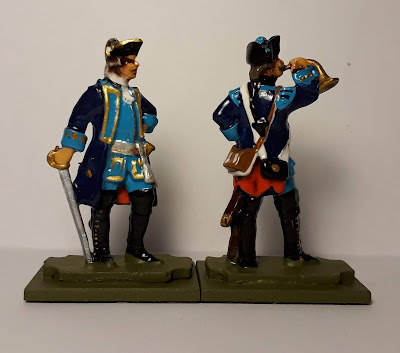 And finally a mix of the old and new figures. 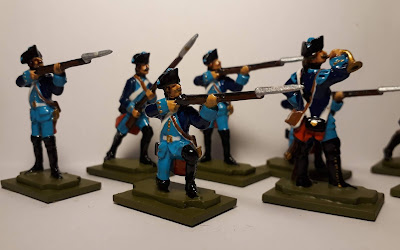 Next I think a couple of mounted officers.
Posted by SteveM at Sunday, October 17, 2021 6 comments:

I finally got around to casting and painting up some Grenz - just a small 8 man unit for use using the 'A Gentleman's War' rules (which are highly recommended). 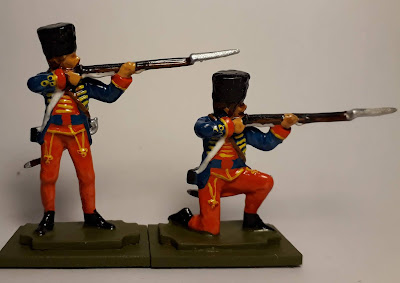 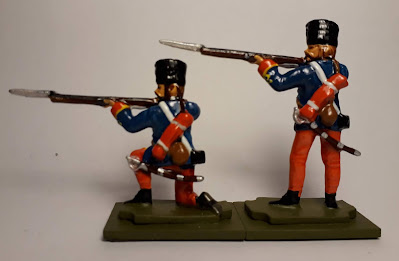 These are (currently?) the only two Grenz figures in the range, with no dedicated command. To complete the unit I also cast and painted up a Hungarian officer (with a Russian officer's musket) to act as their commander, size wise he fits in OK; however he looks a bit odd in an advancing pose when the rank and file are all stationary firing. 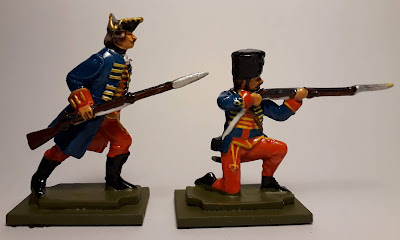 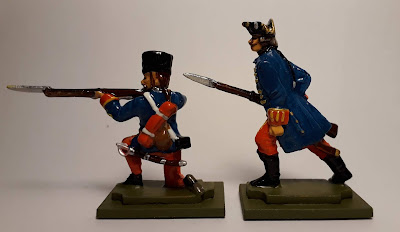 The original plan was to also have an advancing figure, so after mixing in a few of those the advancing officer would look fine. I will have another attempt to have some more Grenz figures made - if anyone else wants them then let me know, and it would help if you contact PA on their Facebook page to ask them to make some more Grenz poses.

Casting wise;  I struggled to get the fine detail, particularly on the face and shako fur, however they paint up fine.  I was using my 'scrap' metal which often struggles to produce fine detail, I had run out of Model Metal, but now have some, so will see if I can get better results next time I have a casting session.

I have also cast some light infantry and generals, which I hope to get painted in the next week or so.

As always your comments would be appreciated.