Following on from discussions about Frei Corps and Jager, some thoughts about the Grenz and Pandour. A hole in the PA range which needs filling.

There was quite a lot of variation in the uniform worn by the Austrian Grenz regiments, so one of the troop types needs to be chosen. The Pengel & Hurt book on Austrian infantry contains a lot of useful information, including the illustrations and table below. 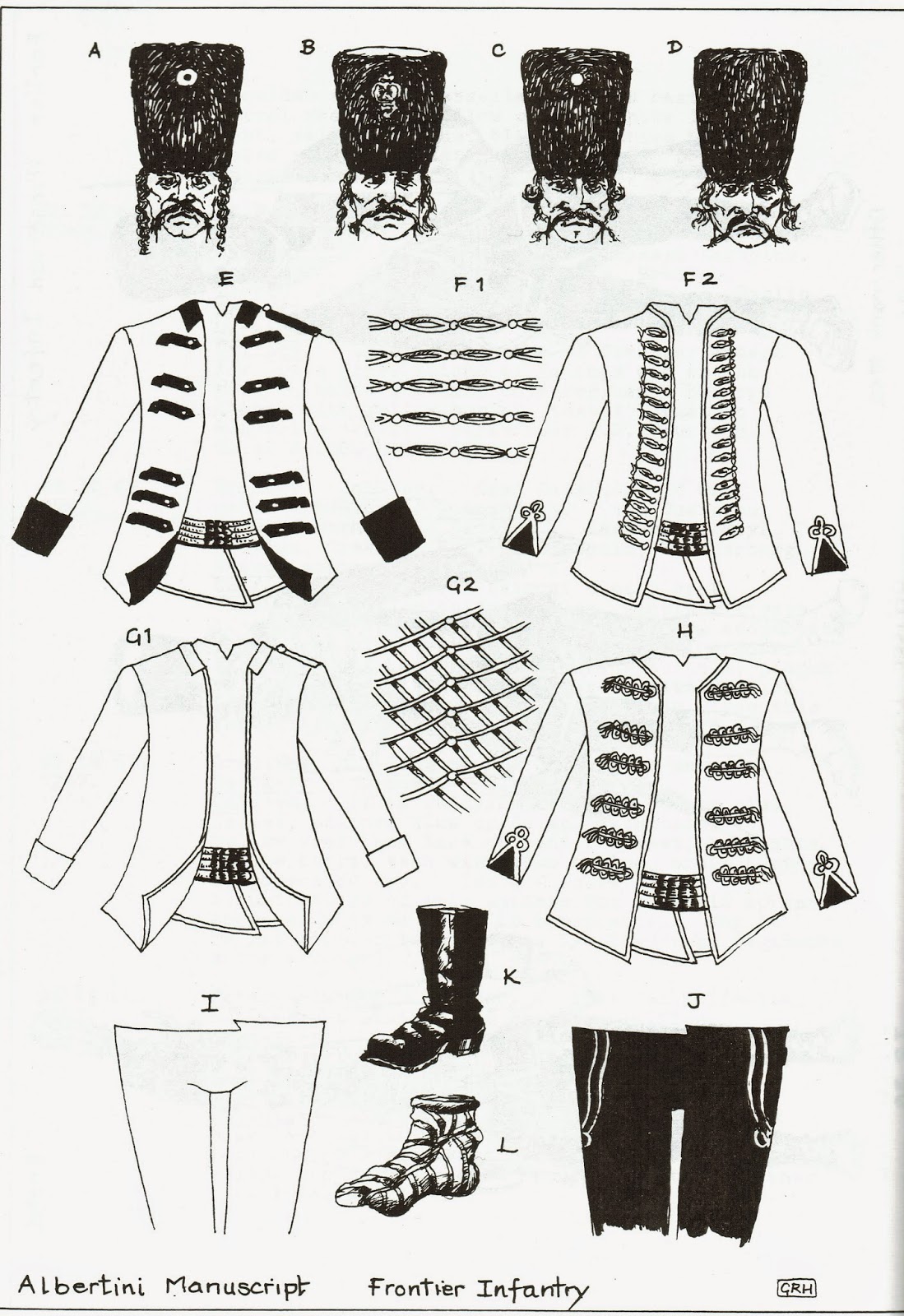 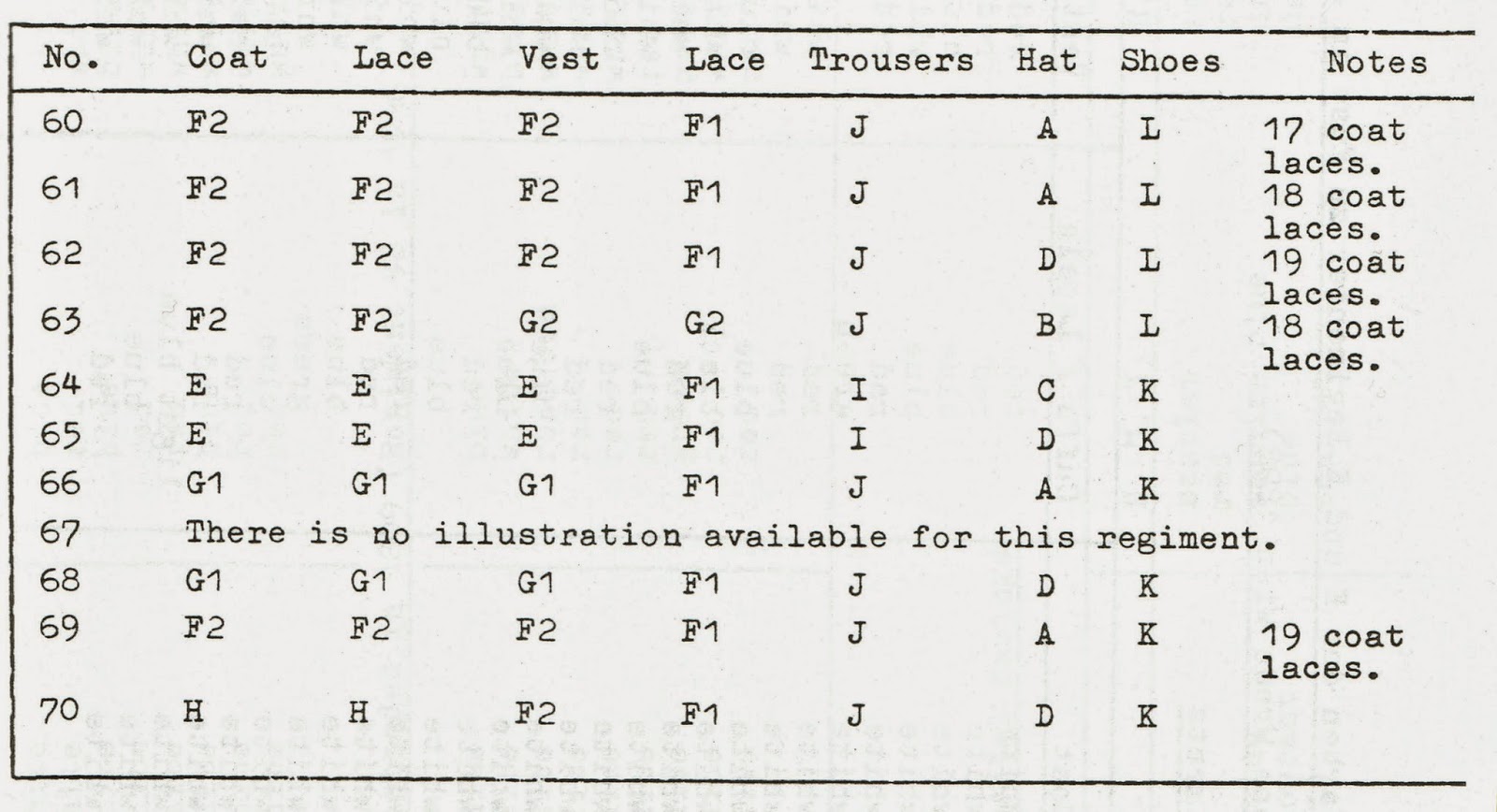 The table is useful, as at a  glance it can be seen that the ones with coat type 'F2' are marginally more common, so it makes sense to produce a figure which represents 60-63 & 69. Below is an illustration from an Osprey book, type 'F2' is on the left and type 'E' one on the right. Of course a good representation of any of them can be done with a bit of work and a paint job.

There is another reason for choosing the 'F2' type - it is also the one which is most similar to the Russian pandour regiments.

There are minor differences, but the Austrian figure is pretty close.

This is a grenadier, others would be similar but with no plate on the hat.

This really depends how many moulds are made, as depending on what else goes in beween two and four heads will fit.

Going back to the P&H illustrations and table it can be seen that  head types  'A' and 'D' are most common. These are very similar so just the type A would be enough, so a couple of these in each mould.

The Russian hat tapered slightly towards the top, so at least one of these.

Austrian Grenz were famous for their red cloaks, which were generally rolled up over the haversack, but as far as I am aware there are no illustrations showing the Russian Pandour with them (if anyone has some let me know), so there are really three options:


What does everyone think?

Grenz officers were very similar to  those in the Hungarians, so I would suggest  there is no need for additional figures.

As there is no need for officer figures, and following on from earlier discussions on poses I would be temped to have two moulds, so four figures, and I would go for:

What should the range cover?


Some initial thoughts on light infantry. These moulds are still a long way off;  but it is worth thinking about what is wanted before sculpting begins.

There was a lot of minor variation in the dress of the light troops during the Seven Years War; in a conventional cast range this could warrant many different figures. However it is not practical to cover all these minor variations in this range, so the aim is therefore to produce the minimum number of moulds which will give a reasonable coverage of 'light' infantry, my current thinking is tending towards four sets, only the first three of which will be covered in the Prussians, Austrian and Russian releases:


This first post, which is intended to decide on the best poses for the range will only discuss the Frei Corps types. However a the Croats are not available in any form either in this range or previous ranges it might be worth putting those into production first.

The frei corps are best covered with a set of bodies which are representative of all nations. These cannot be correct for all of them, so just reasonably close. - possibly similar to the Prussian line infantry, perhaps without the bread bag?

Most such troops would wear the tricorn, but there were exceptions such as the chap on the right with a casket (and in the French army the mirliton).

The figures can then also usefully be used to form the close order firing line for anyone who wants to do so.

The jagers carried a rifle which was shorter than a musket, and often wore boots rather than gaiters.

They are also often shown with lighter equipment than the frei corps and line, so perhaps dispense with both the haversack and bread bag.

The figure shown is an Austrian in a casket, a Prussian would be similar but wearing a tricorn.

The frei corps units generally wore the tricorn type of their line troops, but there were exceptions. Prussian Jager wore a tricorn similar to their musketeers, but the Austrians a distinctive casket. As far as I can see this is what needs covering:

The poses need to be suitable for spreading out in a skirmish line. Also I would like to try and retain some of the the character of the old Holger Eriksson (HE) range.

There is no need for advancing figures as these are fully covered in the close order troops.

Initially I thought that three moulds, and six figures would be needed, but current feedback suggests that this could possibly done with just four figures, but not rule out doing six. My ideas are listed below.

Firstly I think the two classic firing poses similar to the HE originals. (there are similar figures in the Karoliners).

These two figures will also work well for anyone wanting to produce units of line infantry firing.

I have always liked the pose of the old HE standing figure (but the actual castings are not particularly good.). An updated figure similar to this, with the uniform  of a Prussian officer would be a valuable addition to the range and would also fit well in artillery and command groups.


Alternatively,  if  something a bit more dynamic is needed, raise the left arm similar to the Great Northern Wars figure,  and make the right hand able to carry sword, pole arm or musket?

However currently all 'votes' seem to be for the old HE figure.

A standing musician, not sure if a drummer, trumpeter, fifer or hornist is most appropriate?

For the light troops it is worth adding a loading pose to add some variety into the skirmish line. PA already produce loading figures in their Rossbach and Karoliner ranges,It is probably more likely the the first figure with the ram rod in the right hand is more correct, but possibly with the musket angled forward?


NCO/Standard Bearer.It might be worth making a standing NCO figure 'dual purpose' carrying either a standard or a pole arm.

The figure pose could be similar to the HE standing musketeer, but with the right hand a bit higher to hold a flag or pole arm. Uniformed as the Prussian NCO

The figure could also be given a sponge or ram rod to find his way into a gun crew. 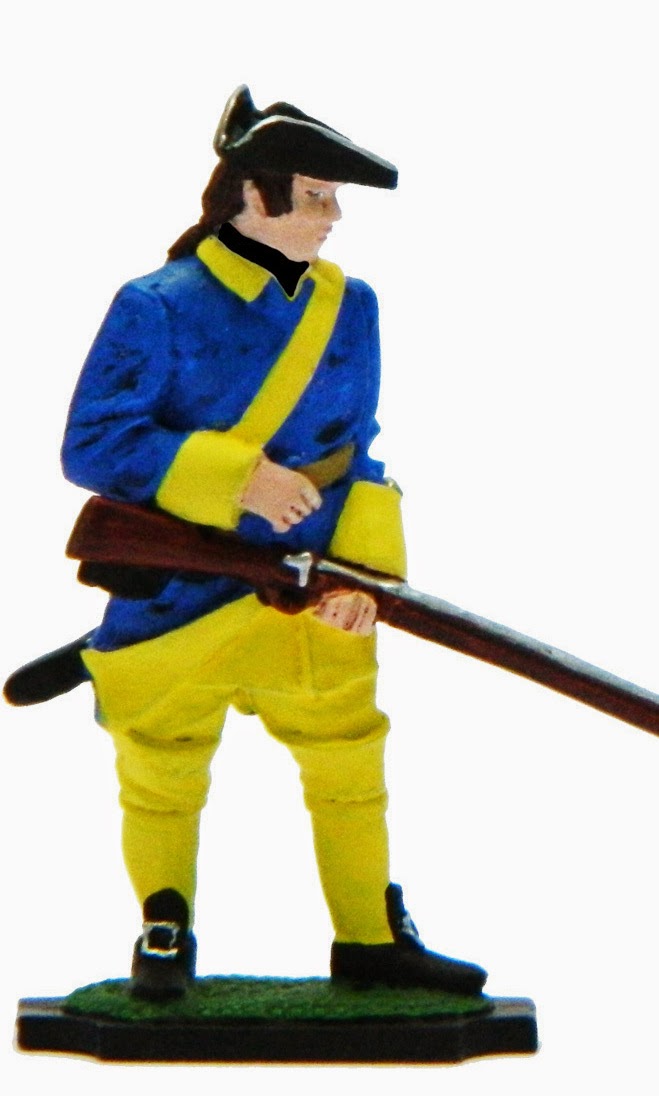 An infantryman priming his pan?


There have been some useful suggestions from Rahway and Ross; and I am wondering about only two moulds for the Frei Corps types, and then a mould for the Jagers, say:

These figures are still a long way off; however thoughts comments and ideas are welcome and I will update the page at intervals as any comments or ideas  come in.
Posted by SteveM at Sunday, September 14, 2014 8 comments:

Hungarians - after the red the BLUE

These are cast from the test moulds. There are a few mistakes on the castings which have been corrected for the production moulds. The most obvious one being that the tricorns should have a pom-pom (so this is IR 32 which probably did not have one).


I think it's fair to say I went a bit overboard on the BLUE, but they are done now so I will have to live with them! 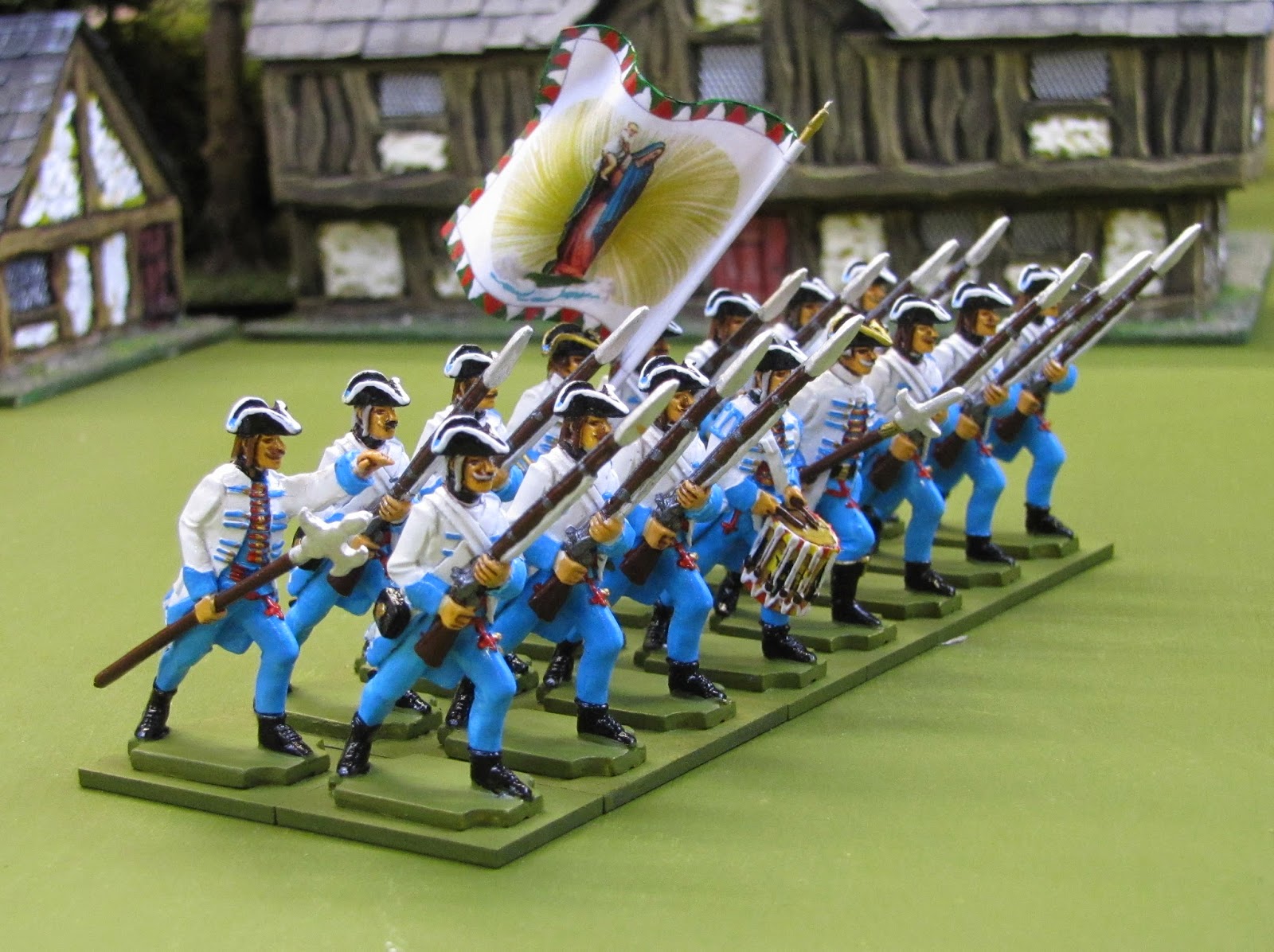 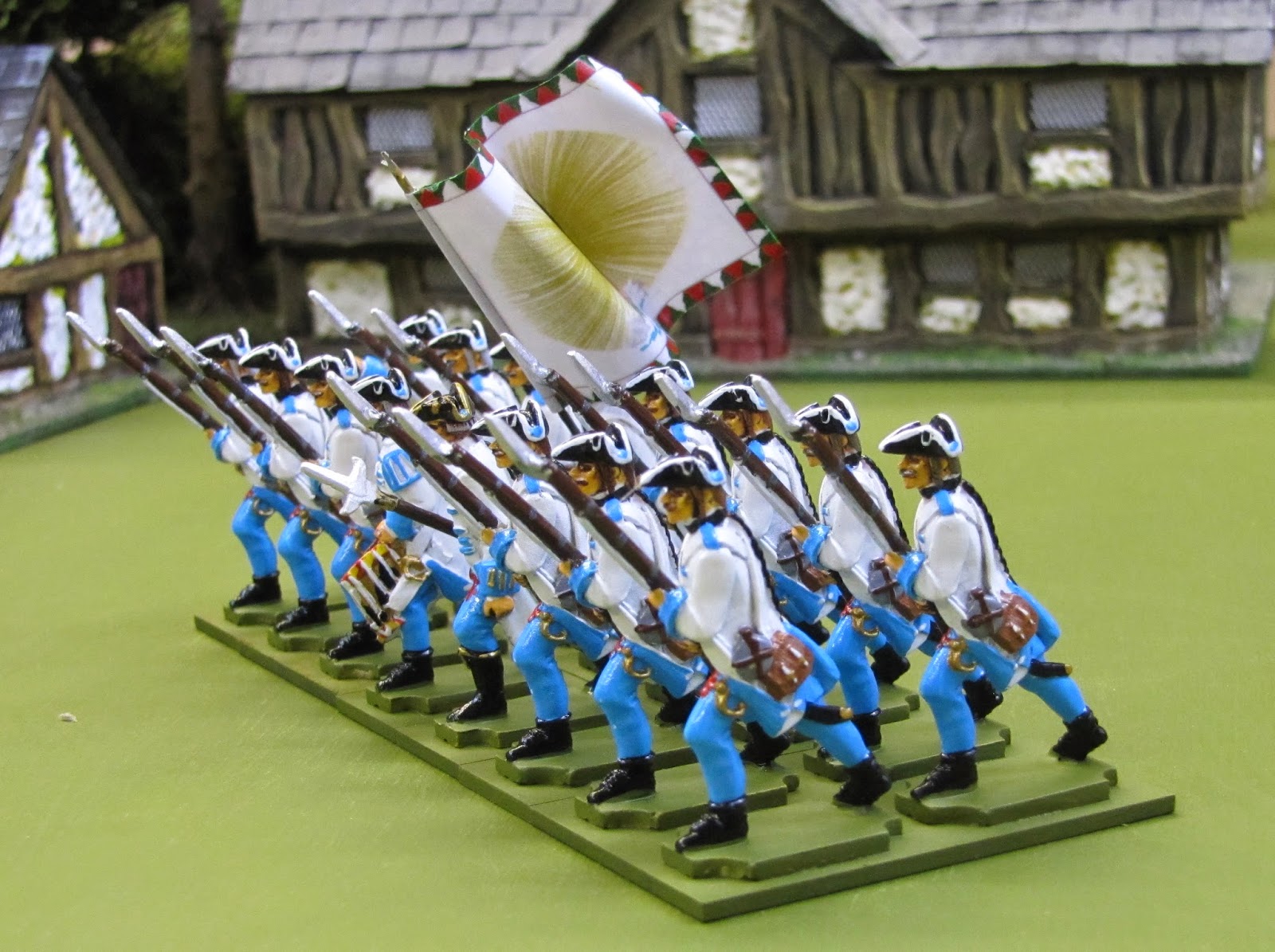 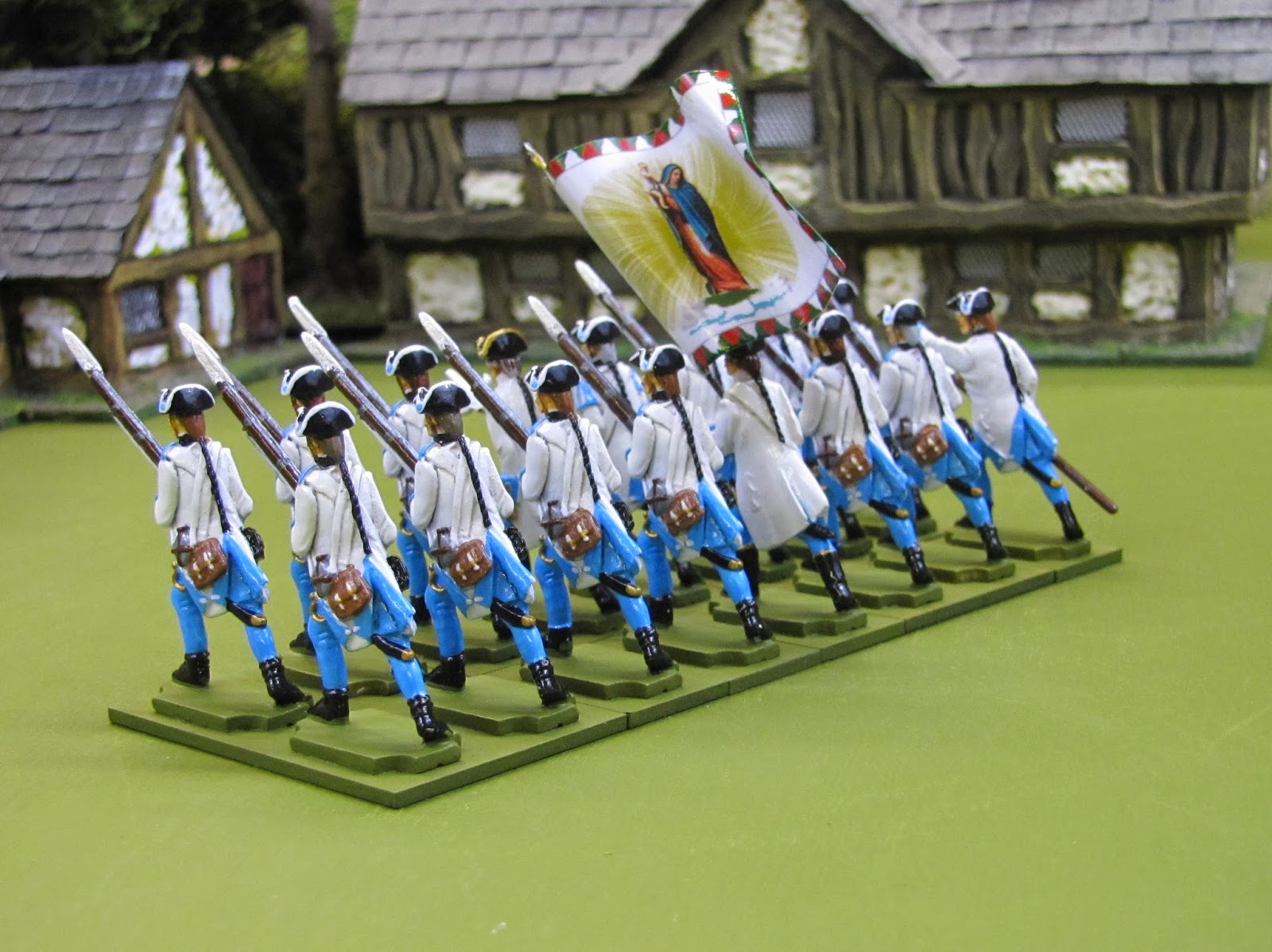 The poses for the drummer and rank and file are the same as in the Prussians and Austrians, however there are new poses for three of the figures. 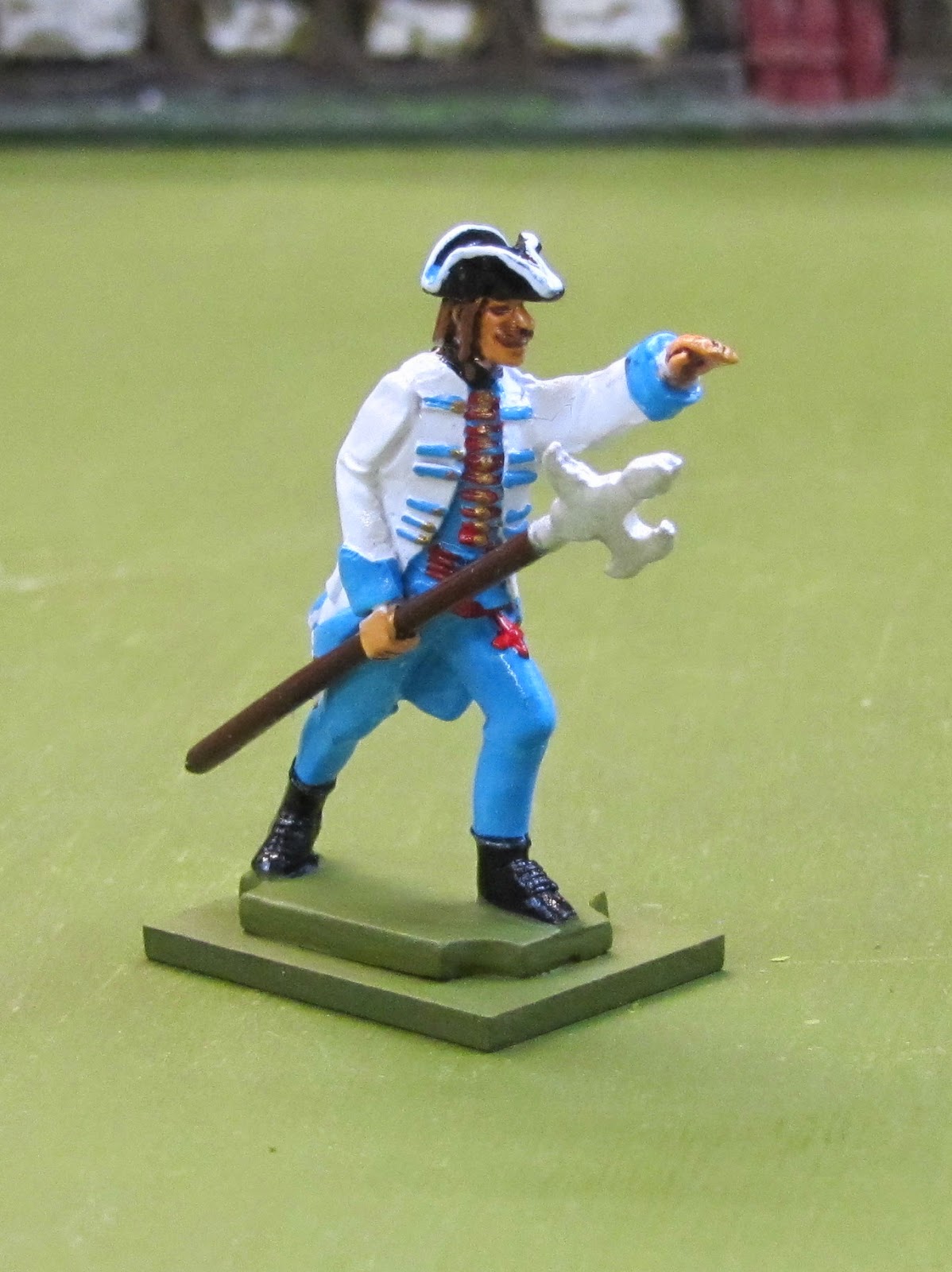 The new NCO with a halberd, but this is a separate weapon so can carry a sword or musket.

I think this is a very nice pose. 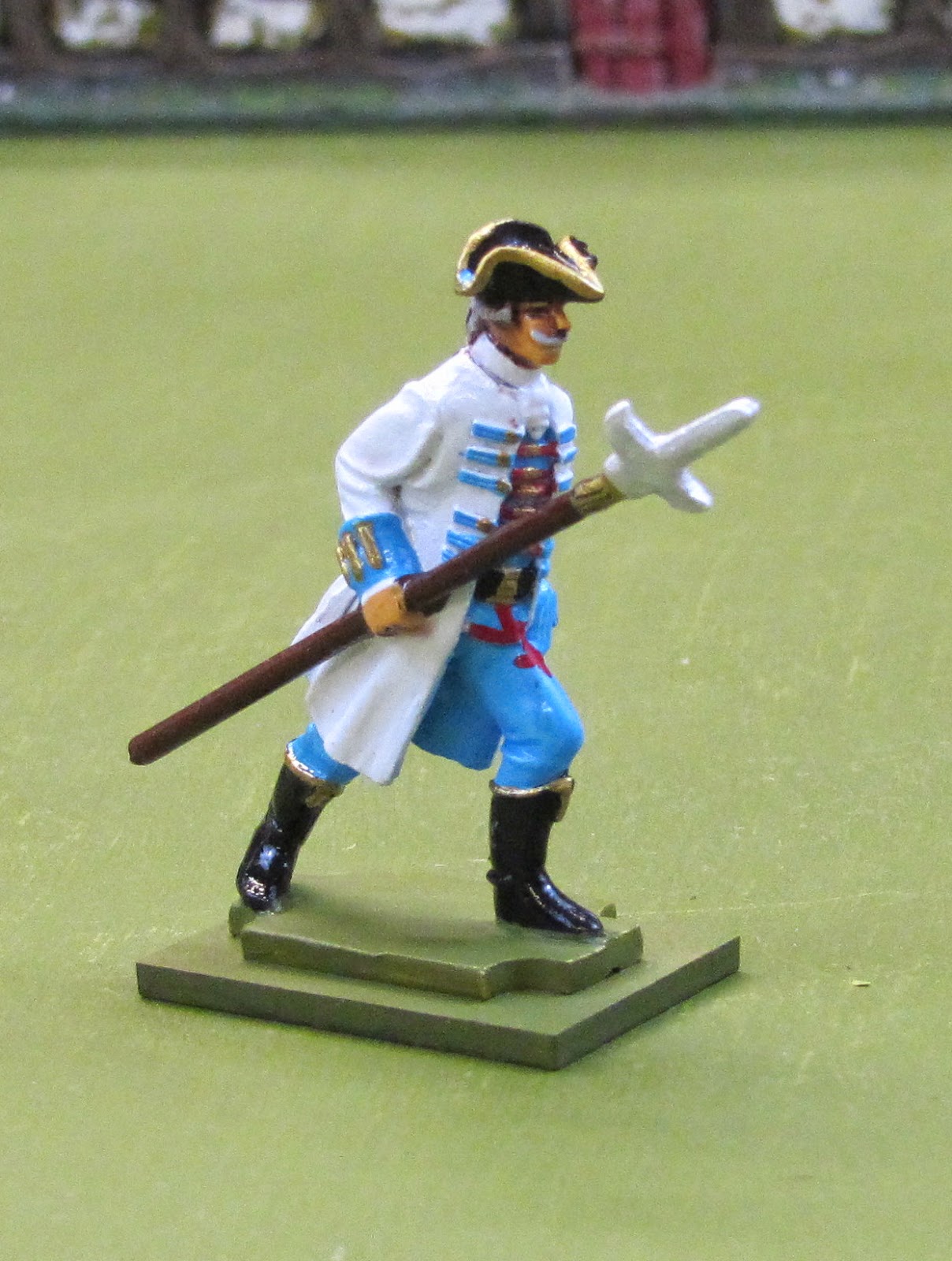 Similarly a new officer pose can carry an assortment of weapons.

(For the Russians we are considering a pose something like this, but with the left arm pointing, He could then be used to in the Prussians and Austrians for variety) 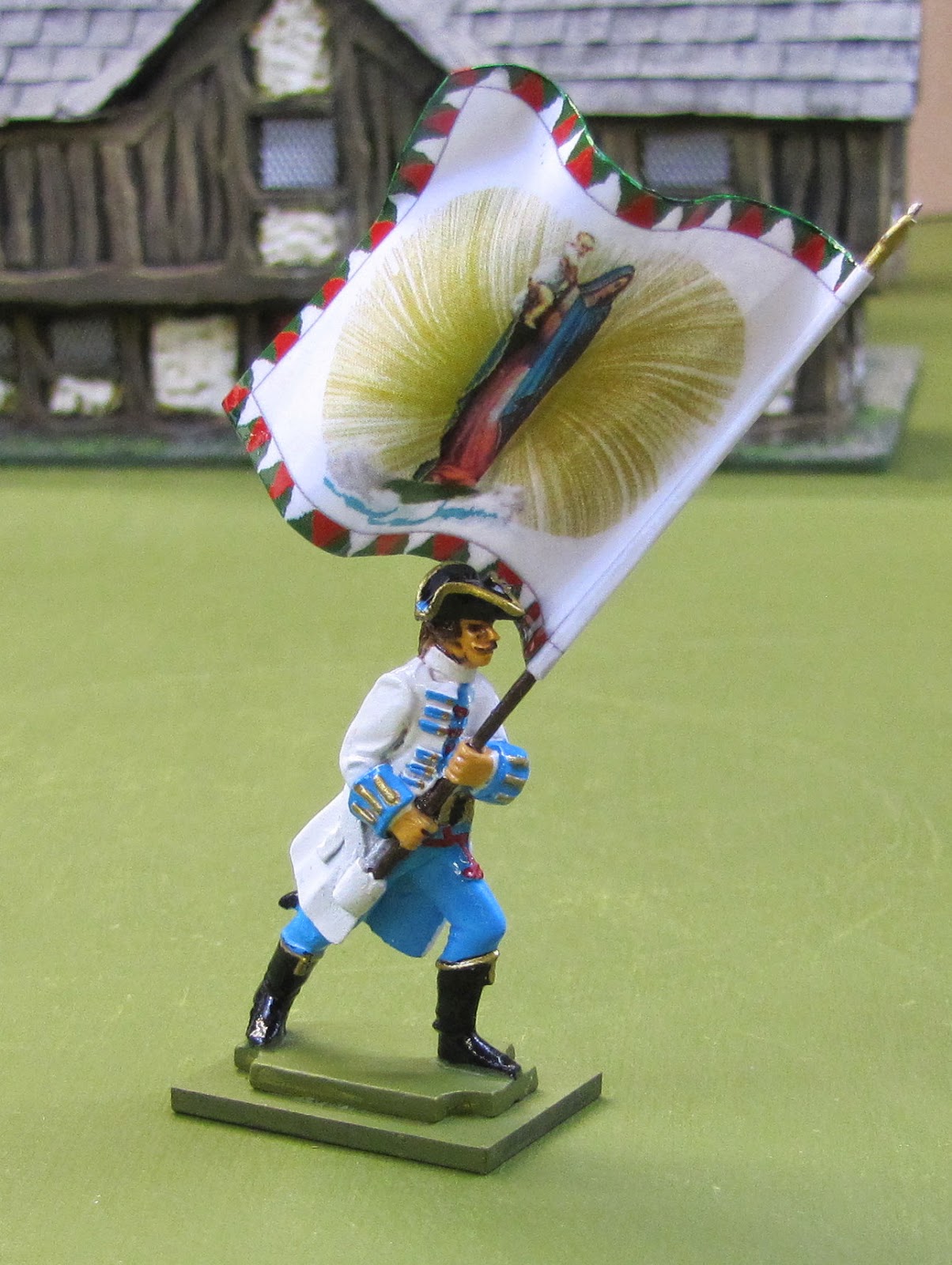 And finally the new standard bearer, we stayed with the same pose but made him an officer.

The flag is from Maverick models and is an early 'Hungarian' version with the Madonna on both sides.

(Again we are thinking of an officer with standard in the Russians so he can be used for variety in the other armies).


I'm not sure of the mould listing or release date - I will let you know when I have more details.

Email ThisBlogThis!Share to TwitterShare to FacebookShare to Pinterest
Labels: Hungarians

Saxons - I fancied painting something Red! 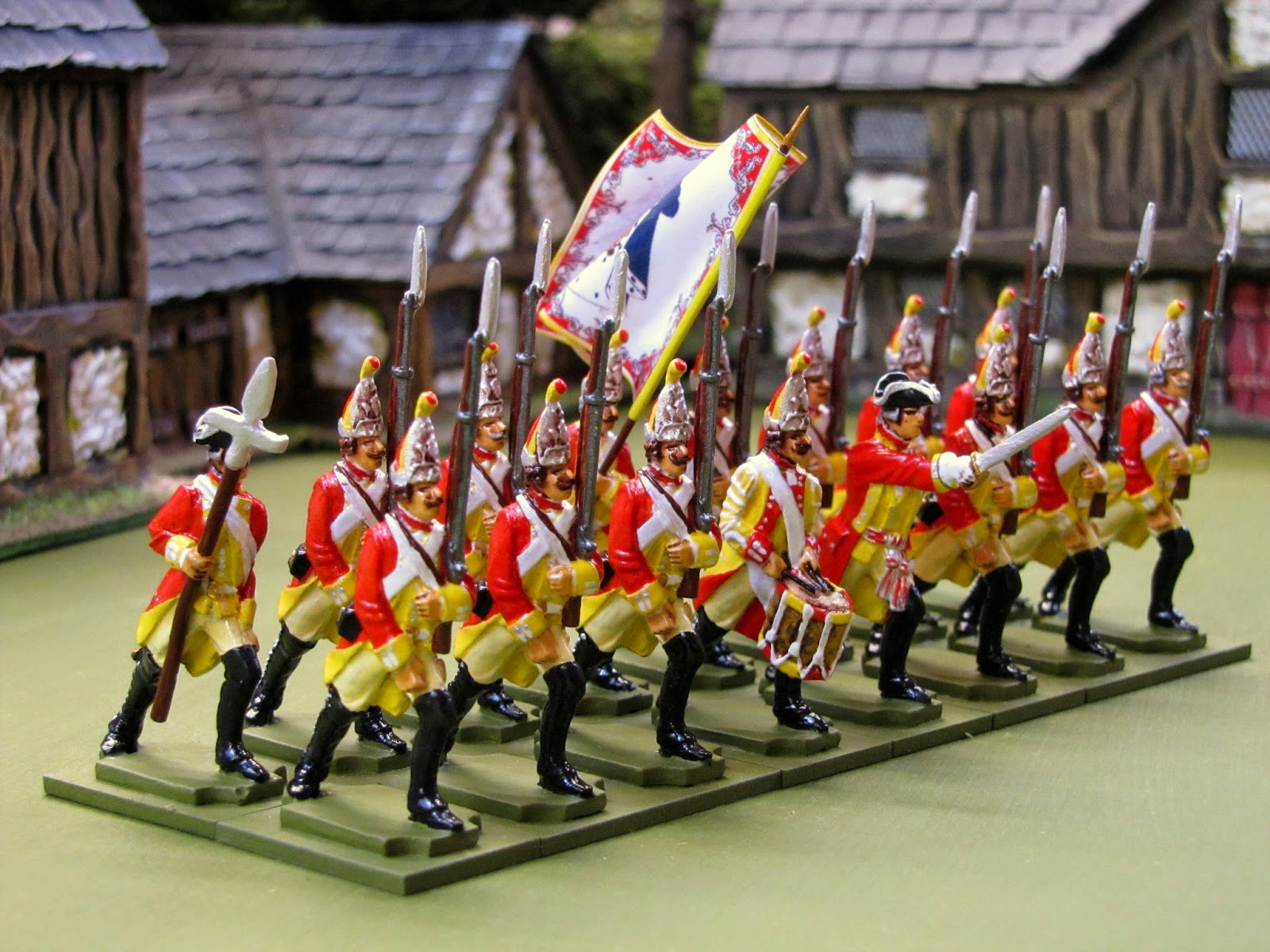 As a break from Prussian blue and Austrian white I decided to paint something in red, both because red always looks good, and I have an opponent who I am trying to tempt into painting a British army. (Also - I really do not like painting Prussians, I have never mastered painting the red and the blue - just too much like hard work)

We already have a few battalions of white coated Saxons (Karoliners), so I opted for the Saxon Leibgrenadiergarde regiment - no point in messing about is there!

There are no figures for this, so it was a matter of getting as close as possible.

The big decision was what body to use, Prussian or Austrian?

After reading all the material I had at hand, plus the compulsory visit to the Project SYW website, I came to the conclusion that the Saxons fell somewhere between the two:


So on a 3:1 vote I went for the Prussian bodies. (I was initially tempted to go for the Austrian and add a sword, but then I decided that doing a lot of conversion work on the figures is not what we are aiming for with this range) 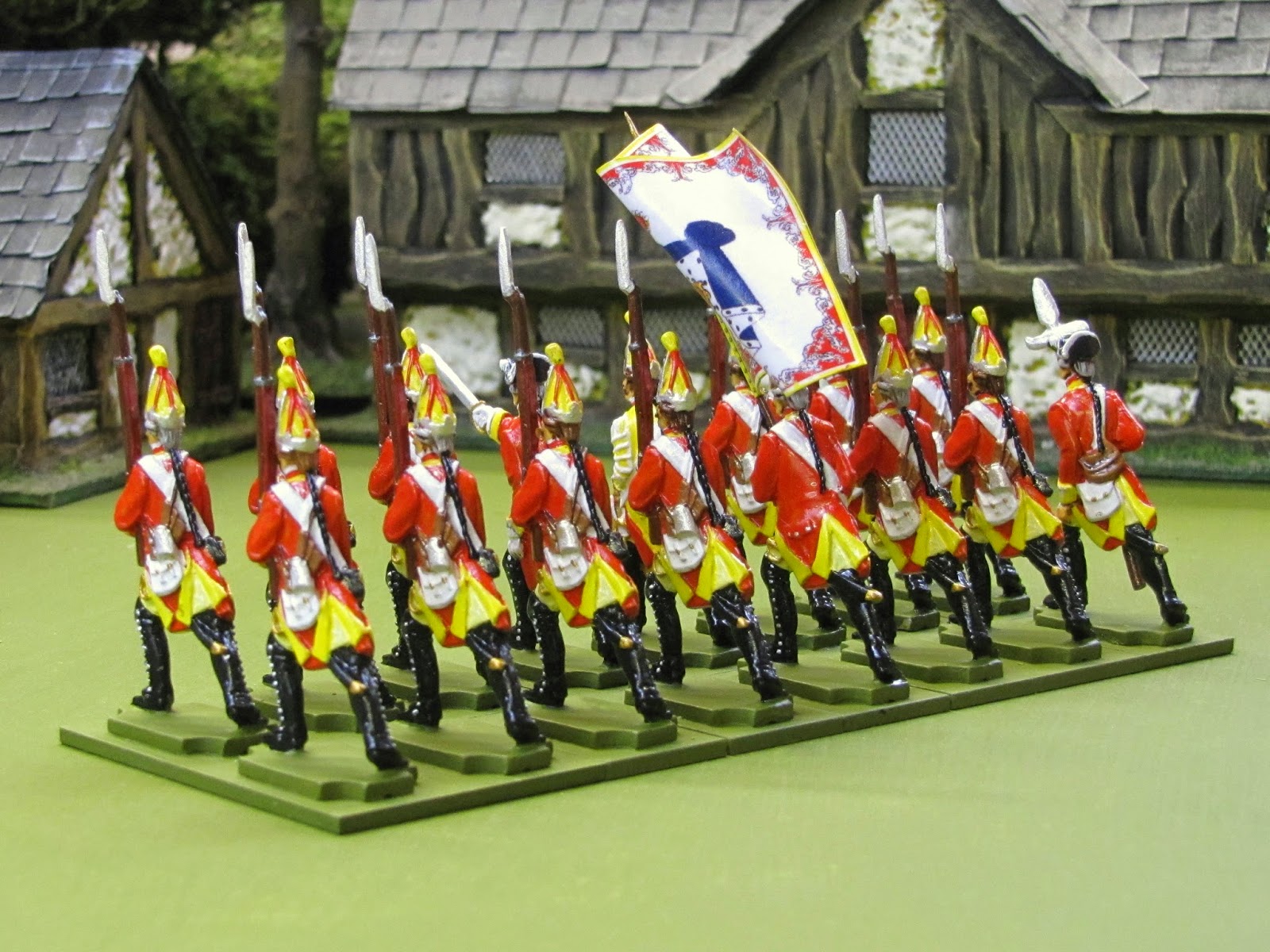 (When the Russians come out there will be figures with a sword and no baggage which would possibly fit the bill better),

The rank and file wore Prussian style grenadier mitres, so that was an easy choice.

The officers and NCOs wore tricorns with cockade, the shape looks more Austrian in style, so the Austrian officer head, with a mustache painted on the NCO (the Hungarian officer head has a mustache, so will be bang on when released, but that really is getting picky). 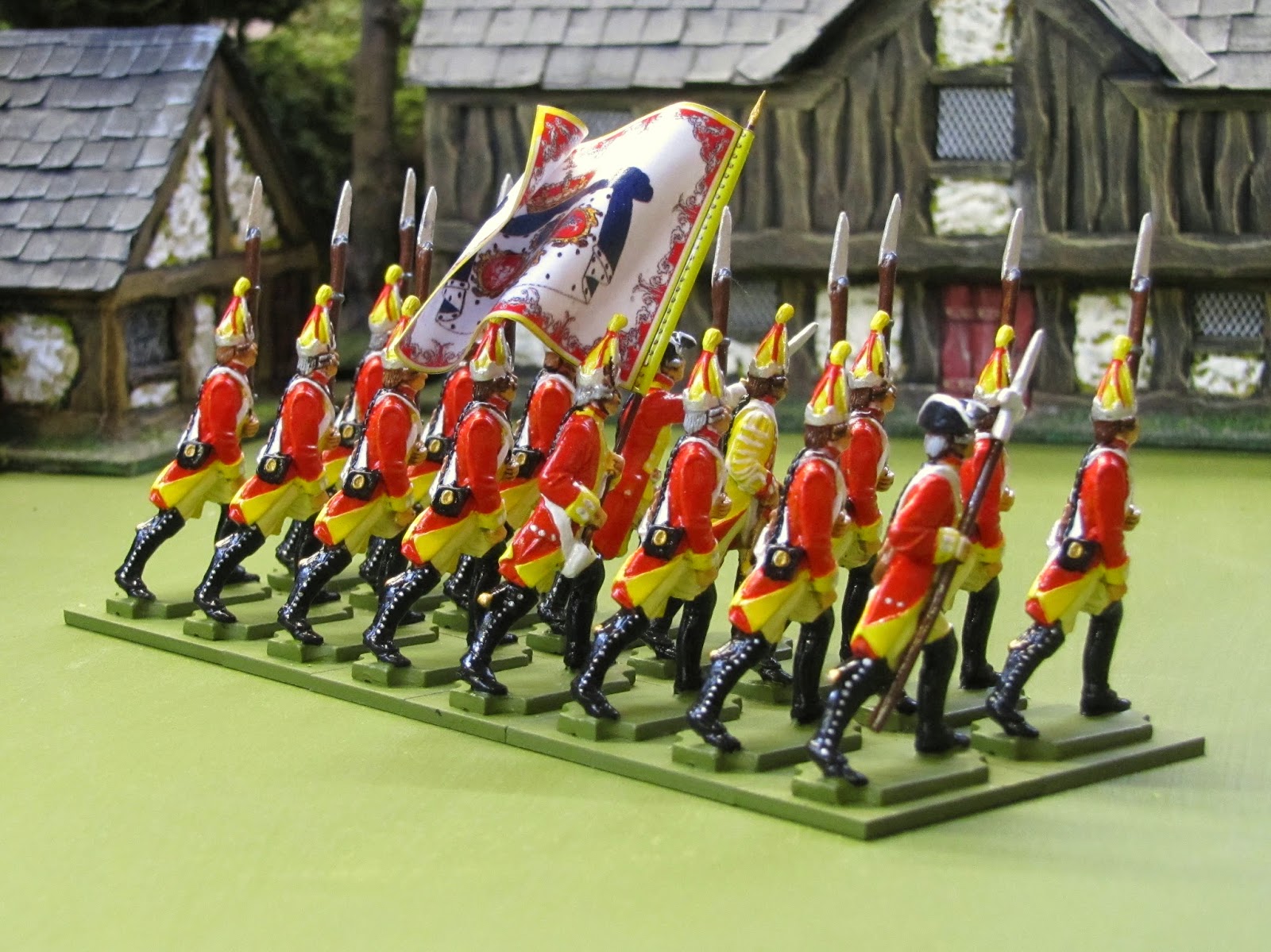 For the units in these new PA figures I have been using printed flag from Maverick Models.

Unfortunately the website does not list the Leibgrenadier flag, presumably as information is lacking. However Pengal and Hurt suggests that both the leibfahne and ordinarfahne were of the leibfahne style, with the former in white and the latter in yellow.

Stuart at Maverick Models very kindly modified his Saxon infantry leibfahne to give what we thought best fit the description. The one used on the unit is the white leibfahne which I put in the first battalion (silver grenadier front plates). I have a yellow version for use when/if I get the second battalion (brass front plates) painted; it is cast & primed...........but I now have some Hungarians to paint! 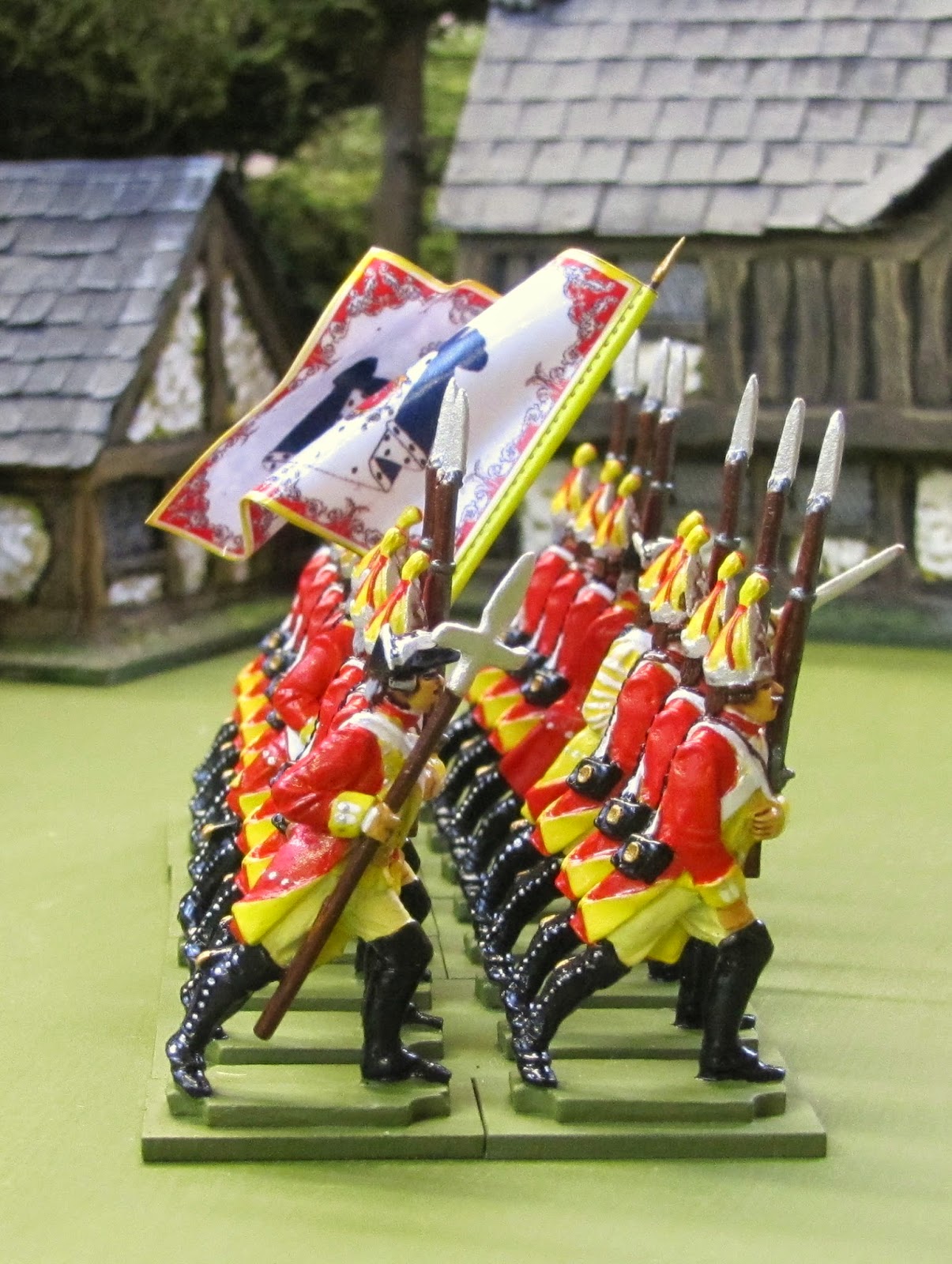 I think they turned out OK, and show what we are trying to do with this range.

I had a chat with Chris (the sculptor) on Thursday, the Hungarians have gone to the factory and should be out end of October????  I have the test moulds, and have cast, assembled and primed an advancing unit ready to paint, so here's a preview. (These figures do not have a pom-pom, this has been added for the production moulds.

There is also a march attach figure which is not shown, and there are grenadier heads as well. We are not sure what will be in each mould yet, I hope to an update in a week or so

There will probably also be an 'Accessories' mould, he is seeing what will fit in.


As usual - comments on the range would be appreciated.
Posted by SteveM at Saturday, September 06, 2014 3 comments: