I am told the Austrian infantry mould is at the factory, but do not have a release date yet - some time in May I think.


A couple of weeks ago I posted a photo of a battalion of Austrian fusiliers advancing, these were made from moulds 3101, 3102 & 3105. I've now done a couple of battalions in the march attack pose, which uses the same three moulds (again a bit of work on the drummer and NCO's pole arm).

I chose IR 22, as I thought these fought alongside the Russians at Kunersdorf (well that's what it says in Pengel & Hurt), and decided to paint them early war so I could give them coloured turn backs; when I was almost finished I discovered they should also have blue vest and trousers - I had done them white !?%*&!!! This gave me two problems, most obviously they needed some more work on them, but also they now look like Hungarians - never mind, I'll have to find a Hungarian regiment with red trousers!

And now I find out they were not even at Kunersdorf and P&H sold me a dummy - never mind they look nice!

I decided to take the plunge and paint up two battalions (this is how my Karoliners are organised); the photo below has the two 16 man battalions on their movement trays and ready for action in 'Maurice' or 'Field of Battle' or some other newfangled set of rules. 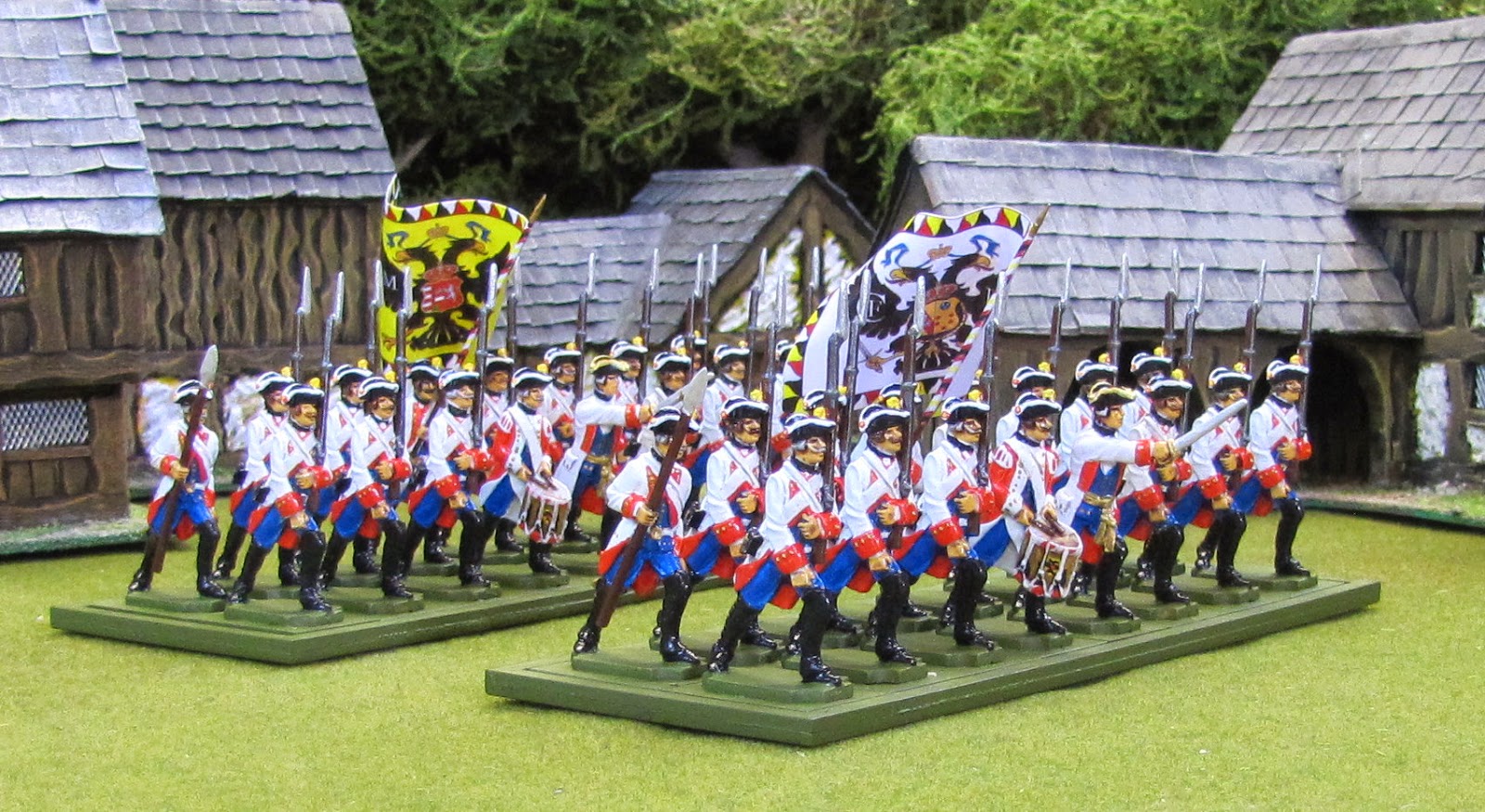 When I paint two battalions, I always give them a single flag each, one the Leibfahne, and the other the Regimentsfahne, this means that the two battalions can be combined into a larger 32 man 'Old School' unit, as shown below.

Having painted these up, I think this march attack pose is fine, and we've decided to stick with it for the Hungarians and Russians.

I've also painted the second battalion to the Prussian fusiliers, so here they are with their chums ready for an 'Old School' outing. 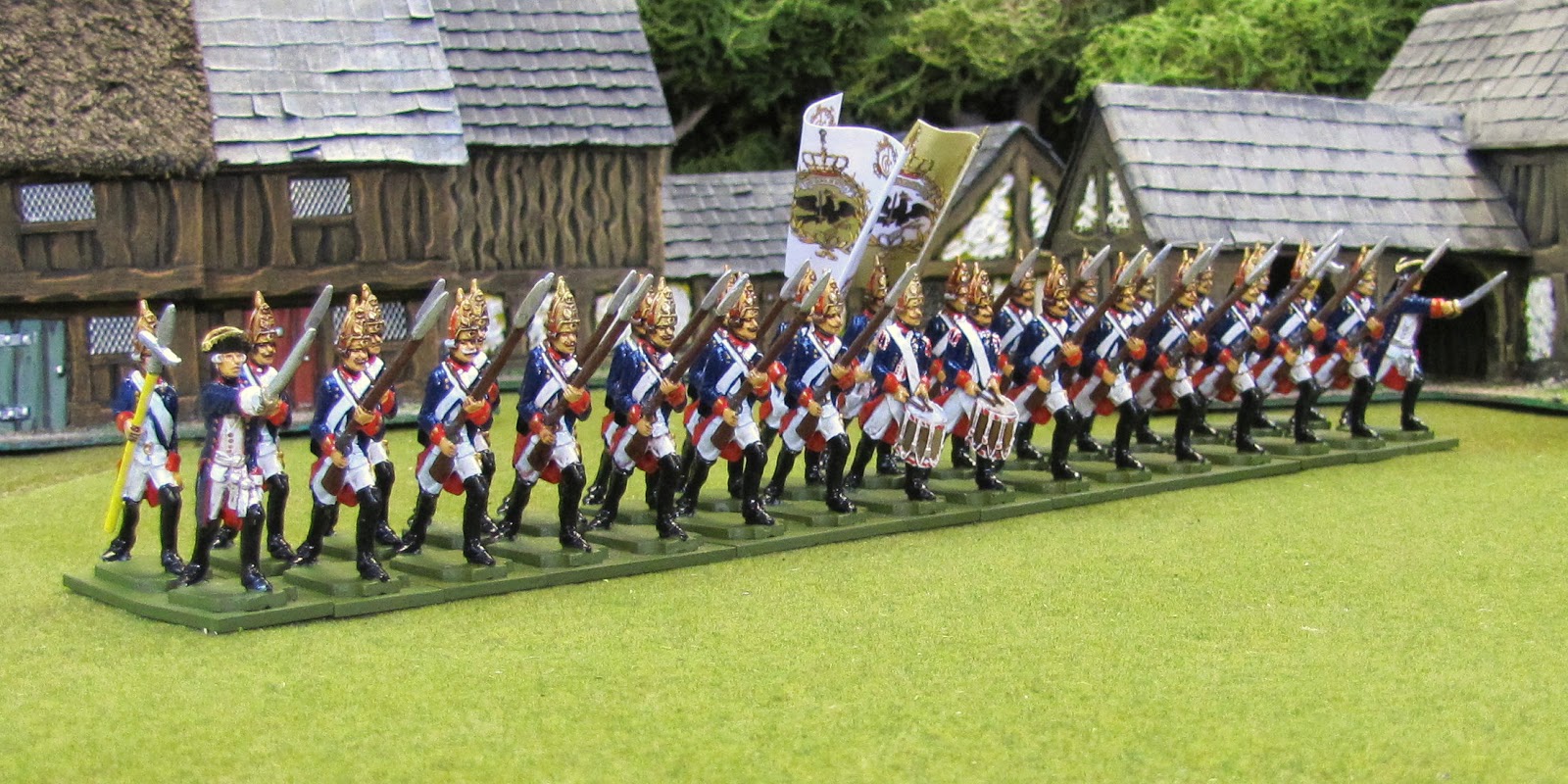 Which pose do you prefer??

Below is a link to Ross Macfarlanes's 'Game of the Month' blog, where there are some photos of his first castings, and his thoughts on the figures - thankfully good.............. 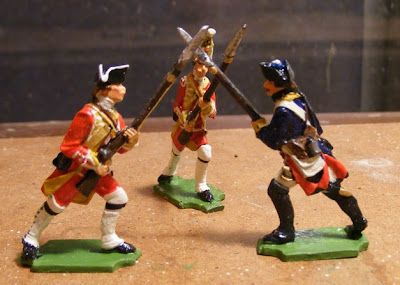 If anyone else has starting doing any casting from the moulds, and have any photos you would like to share let me know.

Plans for the Russians


PA are planning to do three moulds for the Russian 'line' infantry, so six figures plus a selection of heads and weapons.

When putting together this range, the Greenwood and Ball range of booklets are often used during reference and discussion, although relatively slim at 24 pages these booklets are packed with information. Nigel Billington at 18th Century Press has kindly allowed me to reproduce some of the pictures from the Russian book to describe what is being planned:
http://www.18thcenturypress.com/syw.html 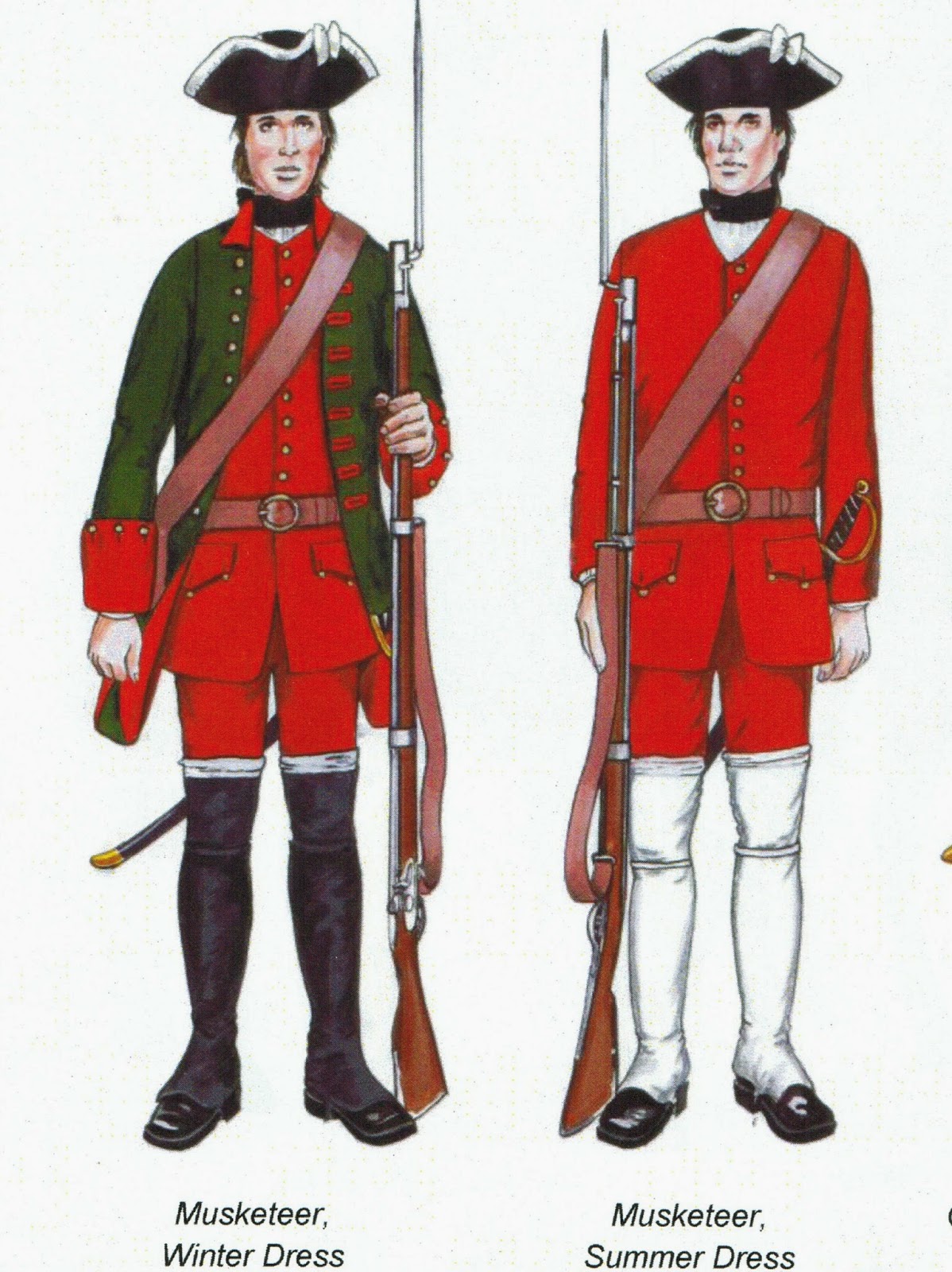 For the Russian infantry, during summer it was normal to leave their heavy coat and knapsack with the baggage, and fight in their waistcoats. Equipment would be light with just their cartridge box on a single shoulder belt, and a sword on their waist belt.


In the Seven Years War the Russians fought all of their major battles in the summer, so the summer uniform seems a good option. It also means that the figures are quite distinct from those of the Prussians and Austrians. 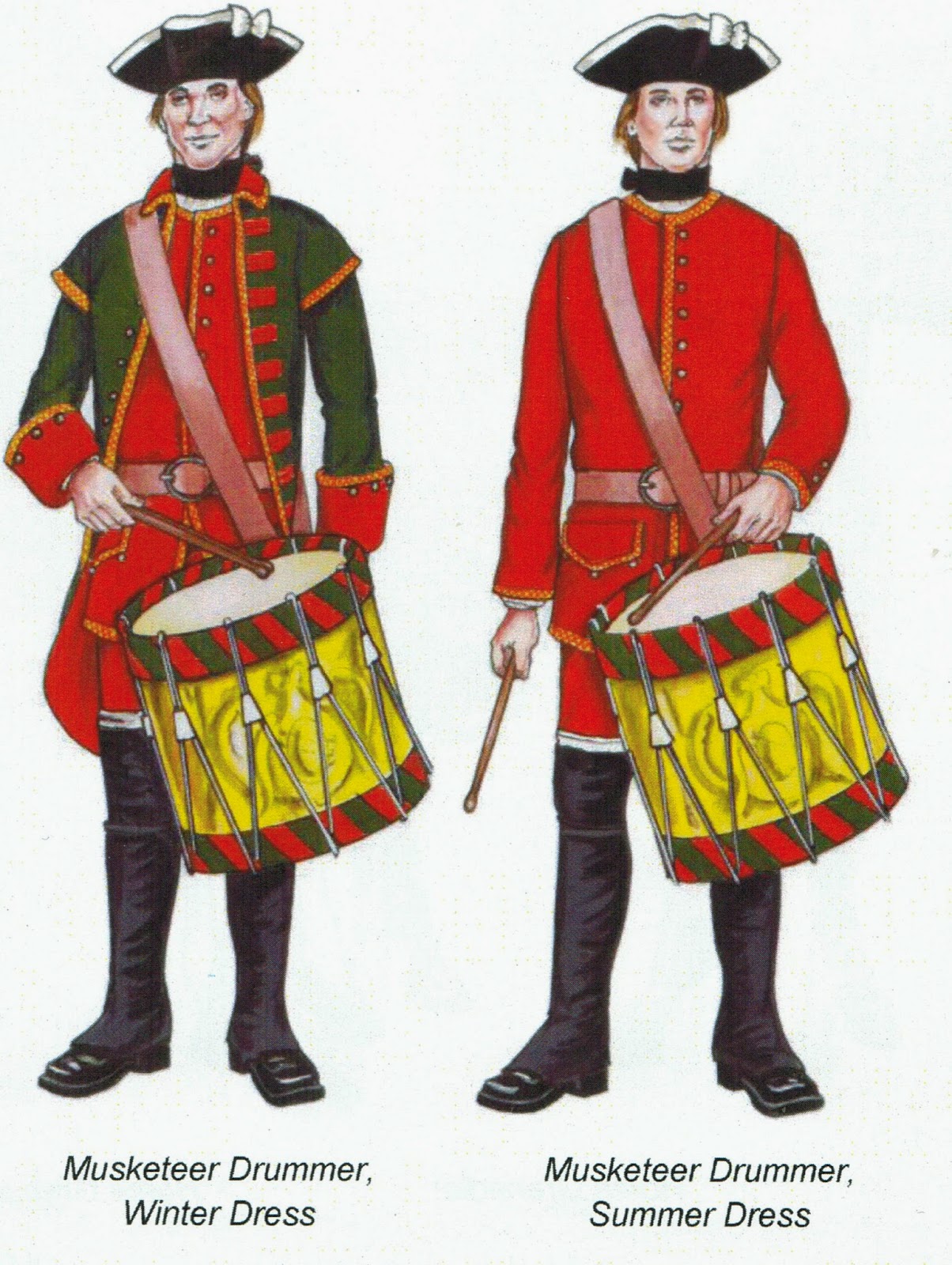 For the summer uniform, as far as I can figure out, the rank and file and NCOs would strip down to their waistcoats. The officers would probably wear their coats, officially drummers should retain their coats, but G&B, Osprey and others show them in waistcoats, so either is fine. So the current plan is:

The Russian grenadiers wore a very distinctive helmet, which clearly needs to be covered by a separate head.

Another item which distinguished the grenadiers from the musketeers was the cartridge box worn on the front of their waist belts. At first sight it would seem that a separate figure is needed for his, however due to the pose and semi-flat nature of these figures the box would hardly be visible, and can just be painted or stuck on, so we decided it was not worth a separate figure?


We have pretty much firmed up on the first two moulds.

There are still spaces for two more figures in a third mould and we have not finalised this yet - current favorites are in bold:

(The Observation Corps wore their cartridge box on the front and had no shoulder belt, they also wore dragoon boots rather than gaiters. The suggestion is that the figure is in summer uniform, so no coat).

Email ThisBlogThis!Share to TwitterShare to FacebookShare to Pinterest
Labels: Russians


I had a chat with PA's sculptor yesterday and we agreed the following eleven moulds will cover the 'line infantry' of the Prussians, Austrians, Hungarians and Russians.


A bit more on the Austrians


The troops from in the German (called Austrian from now on) and Hungarian regiments were very different. The Hungarians will have a set of three moulds to cover most options, however Austrian units can be quite well covered using the Prussian moulds.

New heads are certainly needed, we thought about doing a mould with just heads, but decided to reuse the Prussian command moulds 3101 & 3102, but add a new one with the new fusilier and officer heads, plus two rank & file bodies (in the same poses as Prussians so they all match).

This new mould will contain:


There is a bit of work needed, the pole arm needs converting by cutting off the side bars (there will be a 'halberd' type in with the Hungarians), and the hoops need filing off the 3102 drummers arms (the new drummer in 3104 for the Prussian fusiliers will not have hoops on the arms).


We did a bit of head scratching here, in the end we decided that Austrian grenadiers did not really justify a separate mould - I know that sounds a bit harsh!

It is worth remembering that the aim of this range is to cover most of the major types, and allow others to be made up with a little bit of mixing and matching, and perhaps some conversion work - and these are a good example of both.

The grenadiers most distinctive item is the bearskin; however as Austrian grenadiers are mostly shown with their hair in plaits, so it is fine to use the heads from the Hungarian moulds (when they are released).

Also the grenadiers should have a sword scabbard showing, but again not thought worth another mould, so the options are:
- Convert the fusilier and stick a scabbard on?
- Use one of the Prussians which have swords, but the extra bread bag?
- Forget the sword - it is after all a black scabbard on a black gaiter?
I took the first option and added one out of card, which was pretty easy - I hope they stay on!

Below is the unit made up as suggested, it also shows the march attack pose which will make up the second 'fusilier' body in 3105.

As usual feedback on the proposed mould range and figure selection would be appreciated.

The first three moulds have now been released. Although packaged as Prussians, it is intended that many of the parts can be used with future releases to make troops of other nations. I don't propose to 'review' these, as I have had a lot of input into their design (I can't sculpt, just ideas and sketches) - I will leave that to others.

I have downloaded the parts diagrams from Prince August's website and included a description of what is in there. Where I have inserted a nationality against a part I have used the following 'coding':
- Prussian - means it is intended primarily for that nation.
- (Prussian) - means that the part is intended for use in other nations.

* The standard bearer needs to have the hands drilled out to accept wire flag staffs. (This was done to allow the correct size flags to be fixed - the poles on the Karoliners are only big enough for a flag designed for a 28mm figure.)

* I have to confess to there having been a bit of a lost opportunity on this mould. It would have been better if there was only one grenadier head in the mould - the other could then have been a fusilier, this was not picked up until too late. There will shortly be another mould 3104 (I think) with fusilier heads, so it might be worth leaving them a while - unless you want a lot of NCOs.


I use my existing 40mm troops in 16 man units playing with 'Field of Battle' (Piquet), or 'Maurice' rulesets, which are both very good. I have cast up and painted a unit each of musketeers, grenadiers and fusiliers to show what can be achieved with just these 3 initial moulds.

This additional Prussian mould will probably be added to fill some holes in the range:

Below are some photos of the 'greens.'

As usual feedback would be appreciated.