A couple of weeks ago I took a boot full of 40mm figures down the club for a game of Field of Battle (FoB). No particular battle, just line them up and show my opponent how to play the rules.

Unfortunately Martin had the most abysmal dice rolling I have seen for years, and my new Russian grenadiers bravely marched forward - and legged it - well that's their first battle jitters over (see his blog)!

I took a few photos, but I forgot to switch off the flash, so they were mostly rubbish, below is the only one taken without a flash. 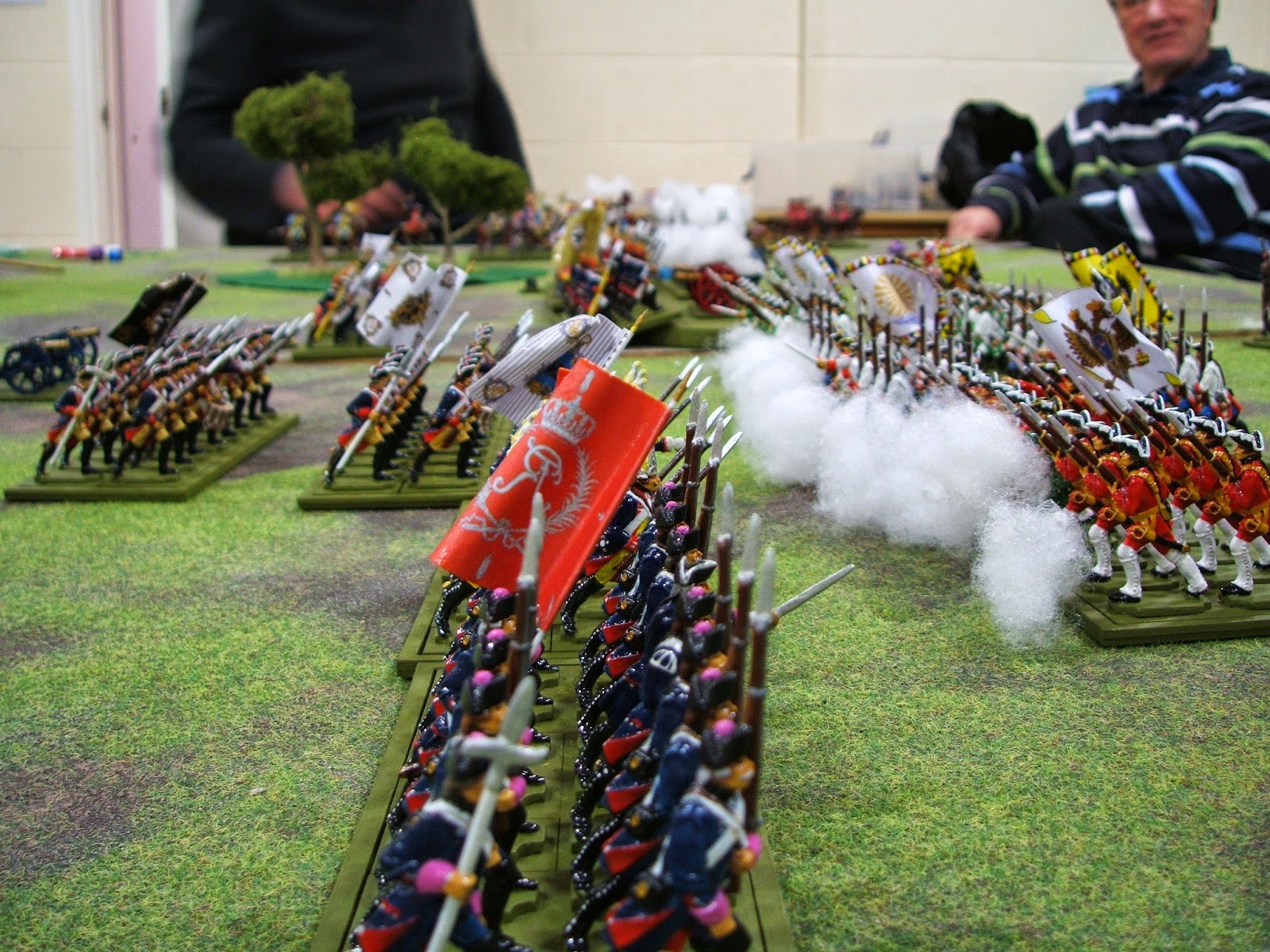 I have just discovered (see comment 13 on previous post) that Martin took a few photos on his phone and put them on his blog:


The infantry are all the new SYW range, the cavalry and artillery old Karoliners and HE.

I have a game of Maurice with them tomorrow, so must try and take some photos.
Posted by SteveM at Monday, March 30, 2015 2 comments:

I've painted up another couple of units to show some more of the range.


The march attack figures have a separate arm, but assemble and paint up easily. The new grenadier head/helmet is very nice, and is a really valuable addition to the range.

One other thing I would mention, I always file down the bayonets to a triangular section, they look much better. 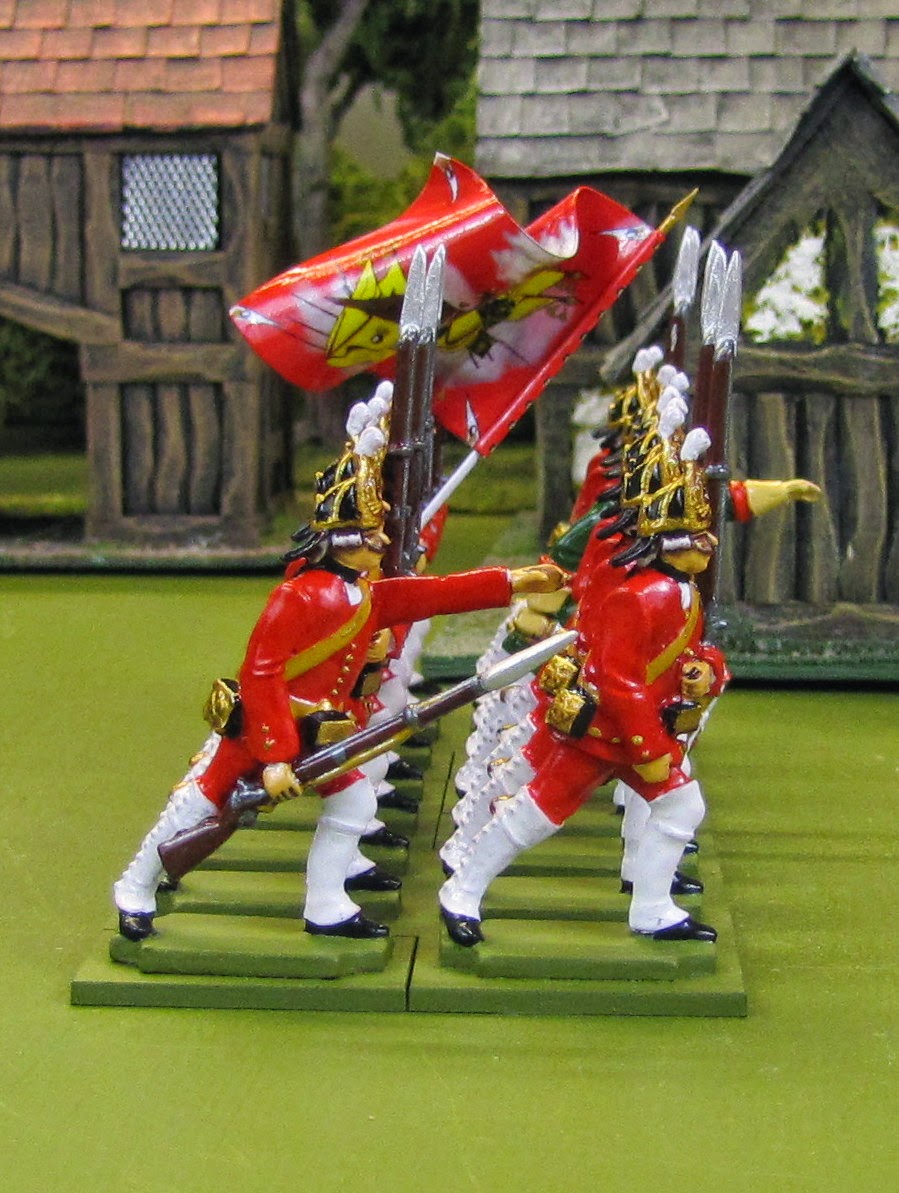 (And, it is worth rotating the left hands on the officer and NCO, otherwise they look like a Nazi salute).

The flags are from Maverick Models, these are relatively inexpensive, and can be printed to the size you want (within reason). 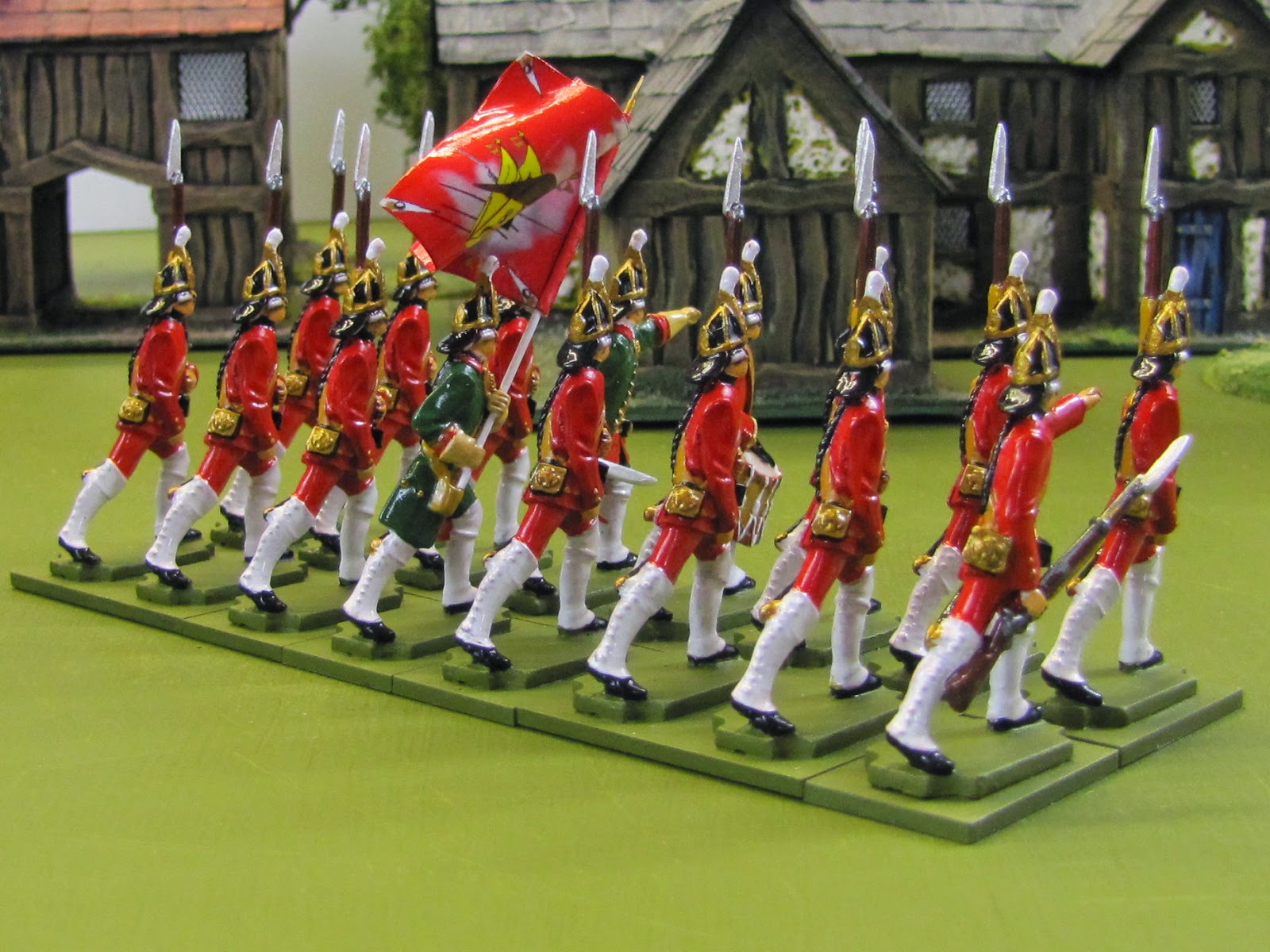 The bodies in the moulds are for musketeers, and so do not have the cartridge pouch on the waist belt which was characteristic for the grenadiers (or the correct grenade pouch on the shoulder strap), however the difference was not really enough to justify a complete new set of moulds. 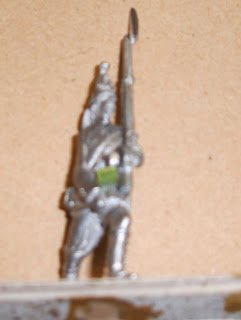 The original plan was to have a separate 'stick on' waist pouch to convert the figure, unfortunately this could not be fitted in, and was thought too delicate for the mould making process, so when the figure is assembled with the grenadier head it is not quite correct. It would still look pretty good, however I chose to make my own pouches out of plasticard (Renedra bases). I made the pouches a bit too big, but they don't look too bad. However when/if PA produce their 'accessories' mould it might be possible to include a strip of pouches?

(Update 29/05/15, the waist pouch will now be included in the moulds, and looks much better than my effort.) 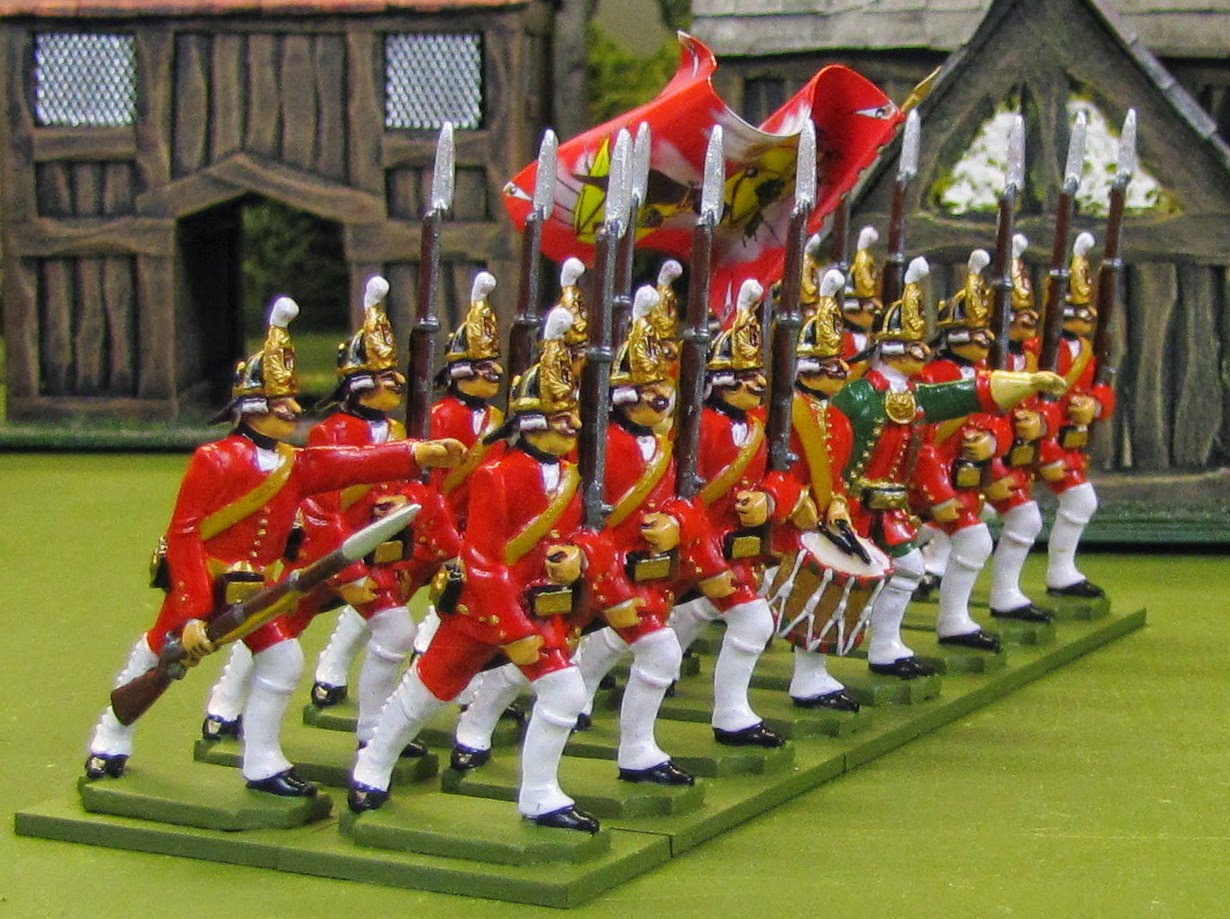 I have no plans to paint up many of this figure, as intend to paint my Russian infantry in summer dress. However as there has been some concern about this new pose I painted up a unit to see what they look like.

I agree there is some scope to improve the pose - but I still think this is a very fine figure, 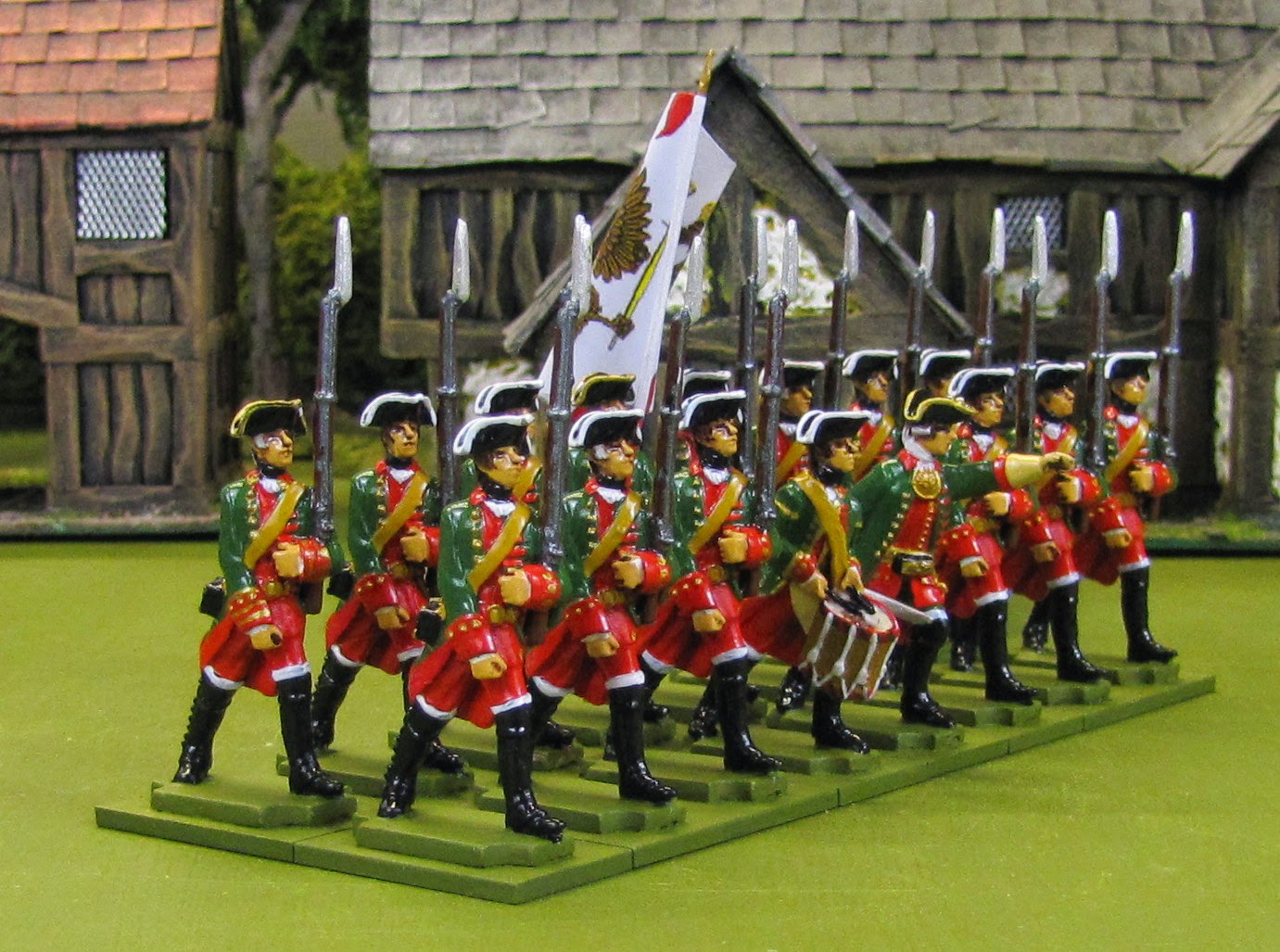 This pose is more upright than anything in the range, and this presents some problems with the command figures. The officer is the new Russian, he does lean forward to match the rest of the range, but as he is leading from the front rank he looks fine.

There is no new NCO in winter uniform, and the Prussian figure is not right as it has belts over the wrong shoulder, and a bread bag. This is not a big problem as the Russian NCOs were armed with muskets, and dressed identical to the rank and file - other than extra decoration which can be painted on. 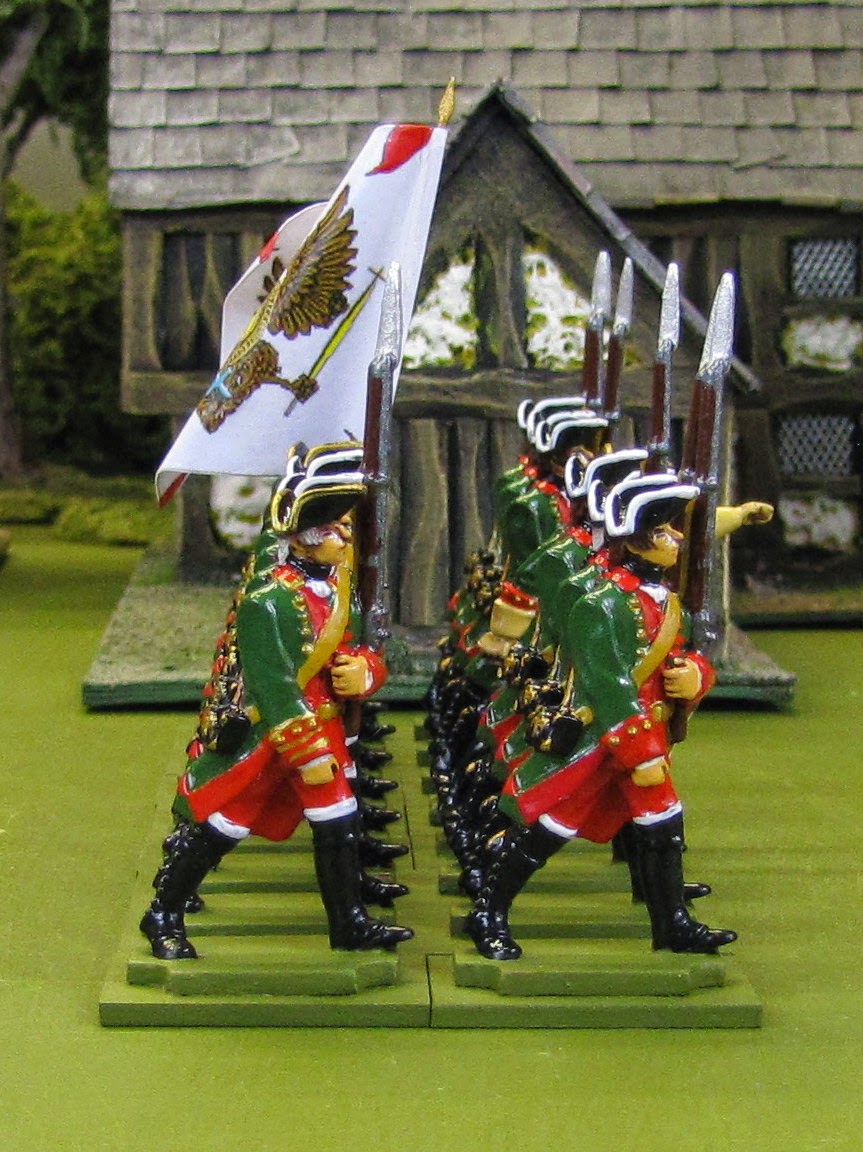 The drummer is Prussian, again leaning forward in the front rank, so looks fine. 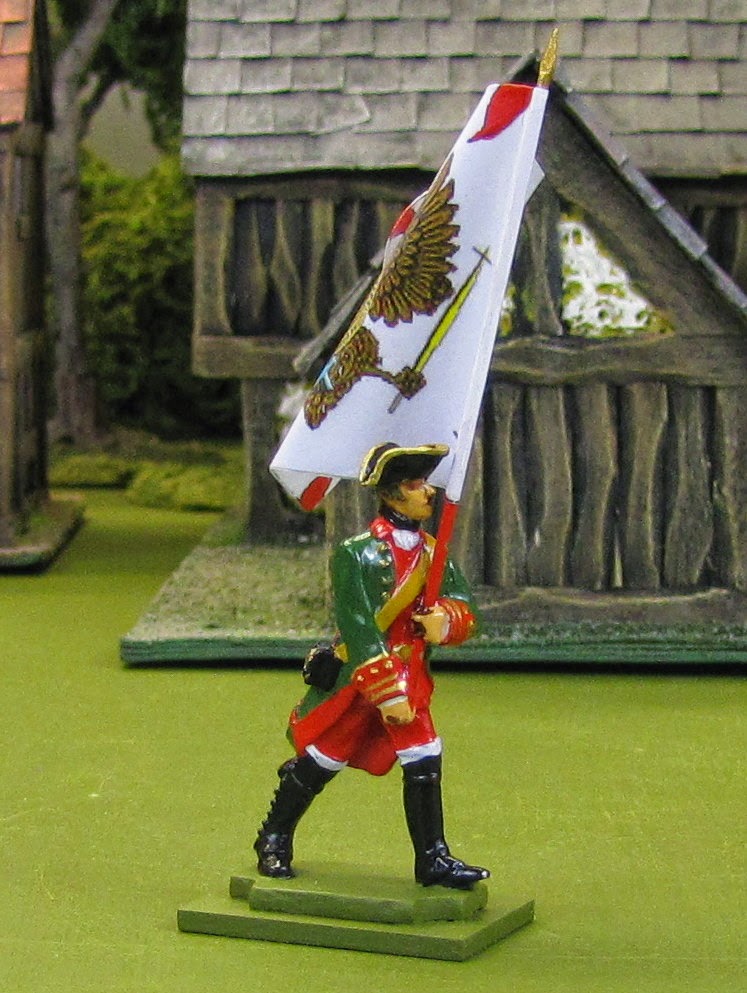 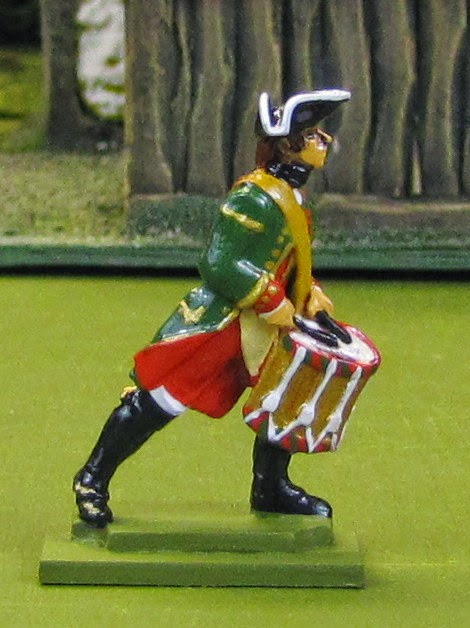 I decided not to use the new standard bearer (officer), as I put the standards in the rear rank, and the forward lean did not look right back there. Instead I decided to make an NCO by converting one of the rank and file, a surprisingly simple job by just drilling through the hands, which are both on the body, and cutting the musket off the separate arm - before gluing it on. I know it's not quite right as he has a cartridge box - but he has to carry his vodka somewhere! 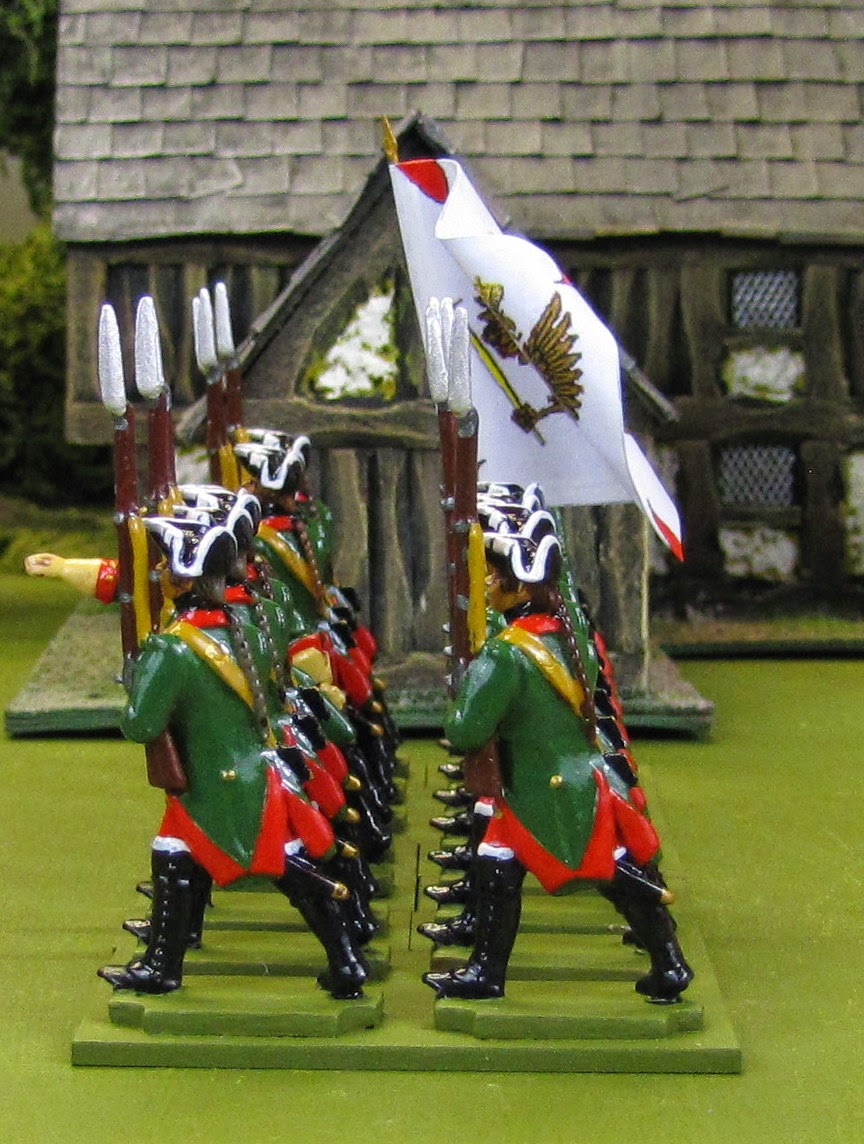