Since the post on French Infantry on 31 January there was a lot of discussion about the need for new French moulds (the Karoliners are pretty close), and if there is a need what to put in them. There are still comments coming into that post, which suggests that there is interest in moulds for French infantry, so I have discussed with PA the possibility of doing some after the initial releases of cavalry.

I have read through and responded to all the comments, and hopefully my suggestions below cover most of what has been said - please put me straight if I have got it wrong? 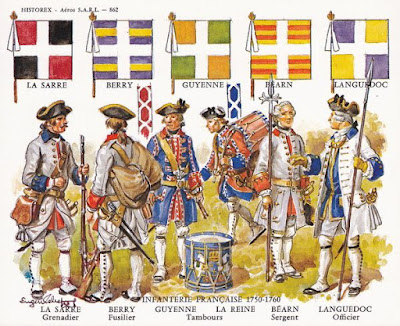 Having looked through all my reference books, and the quite a few hours on the internet, I came to the conclusion that this Historex sheet is a good starting point for discussion.


The first two illustrations give a pretty good indication of what I think the figures should include to make them distinct from the the what is already available in the range:


I would suggest there should be a mould with the usual advancing and march attack poses, kitted out as these chaps. For heads there would be: 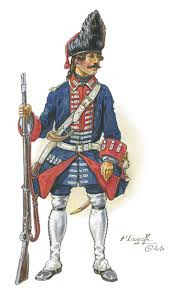 For use in Canada, it might be useful to fit in a 'bonet de police' as worn by the chap in the middle of the illustration below, In the moulds there is usually space for two figures and four 'bits', so a fourth head will not fit in a mould containing a the march attack figure with a separate arm. 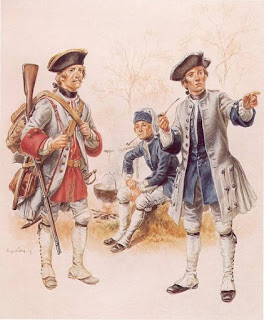 Many illustrations show the French drummers without the coat turned back as the third figure along in the Historex print. With the loose coat tails and belts and scabbards outside the figure is significantly different. (However if you wanted to minimise mould purchases, and already have the Prussians, then drummers are also shown with turn backs, so their drummer is pretty close, but the belts are under the coat and the Prussian coat is open down the front)

The Prussian and Russian officers are close, but not quite right, the Prussian's sash is too prominent, and the gauntlets on the Russian are wrong. if a suitable pose can be found then provide an officer who can either carry the standard or a pole arm.

As for heads in a second mould, an officer's head with tricorn and side curls would be needed, this would also be fine for the drummer (or use one from the rank and file), there is then scope to put in something different, perhaps: 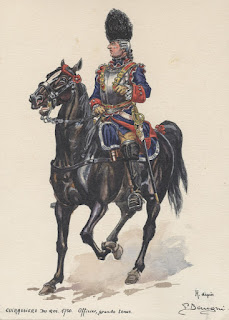 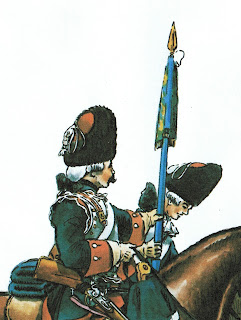 After these four figures what else is really needed for the French?

Get the Cuirassiers and Dragoons released, the range needs cavalry (and artillery, light troops and staff officers)!

If it can be done quickly without much delay to the artillery etc, then release a couple of French infantry moulds to get collectors of French armies up and running, these could contain:

However PA have not yet decided whether or not to do some French early, as it will cause some delay to tthe artillery and light troops. However there is a case for releasing some French infantry after the 'Austrian' cuirassiers and 'Prussian' dragoons,

Sorry for the quiet spell........... Chris has now restarted work on the Austrian cavalry.


Attached is a photo of the almost finished 'green' of the trooper. There is a bit of work to do (reins, holster caps, lower the cartouche and round off the saddle cloth a bit), but quite close.

I selected the pose, as that is how I like to see my cuirassiers (hard looking) - I hope you like it. I think the resulting figure is very good, and am looking forward to painting up a unit (or two). 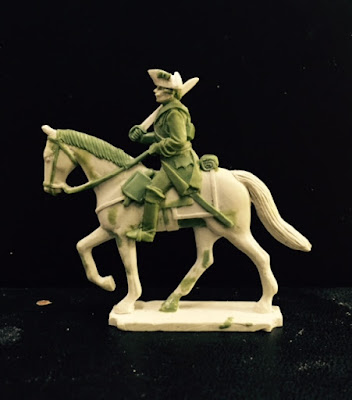 The intention is to cut the figure at the waist, where there will be a 'plug' joint, and the neck where there will be the same fixing as in the infantry. This should allow a fair amount of variation (it is not possible to completely split the horse and rider in semi flats).

We are not yet sure what will fit in the moulds, possibly just the horse in one, and three torsos, carbine, and heads in another. if only three torsos it is a bit of a shame, as I would like to see four, with an officer, standard bearer, trumpeter and trooper. If only three will fit I think that the musician could be left out and added, along with a dragoon drummer, a little later.


Another mould with torsos can cover the officer, standard bearer and trooper for the dragoons, and a further mould for the musician torsos of both the dragoons and cuirassiers.

I think that there should be another walking horse to add a bit of variety - any thoughts on the dragoon pose?


Once we have the first test castings we can see how much/little is needed to complete the dragoons and cuirassiers:


This can really only be decided once we get the first batch cast up.


As usual comments welcome, particularly just as we are setting of with the cavalry.