New hussars - what moulds are needed?

One of the next things on Prince August's 'to do' list are SYW hussars. There are already a number of hussars in the Rossbach range, however they do not fit in with the new figures, the Prussian one with carbine is actually quite nice, but a little small, whereas the poses in the French moulds are not to my liking.

I don't know when these will be done, however it is worth having a discussion about what is wanted, before the sculptor starts work?

There is only likely to be one set of hussar moulds, so these will need to be able to cast figures for many nations; consider the Prussians as a starting point as I have some nice pictures.

Within a cavalry units I generally like to have the following figures:

In order to cover all 4 figures, one option would be to provide a mould for each, however as there will be separate heads, right arms and carbines this could be done with less moulds, so possibly allowing for more variety in horse poses. Initially just consider two main body types.

Equipped with a wide cross belt. If assembled with a sword arm and carbine hung alongside, this will act as a trooper, alternatively with a suitable arm and no carbine  he would make a standard bearer (as was done in the dragoons, which look fine). 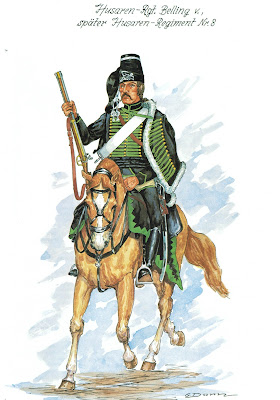 If there is no belt, then with a suitable sword arm he could act as an officer, or alternatively a musician with an arm carrying trumpet. 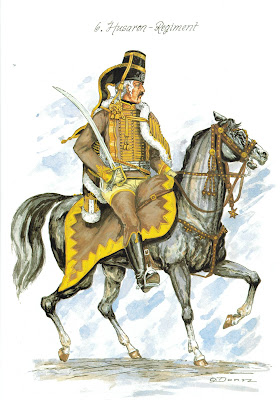 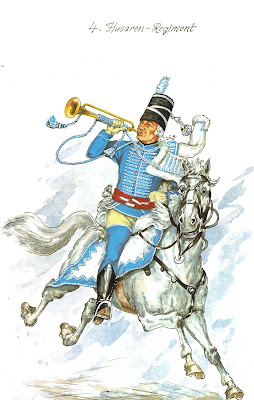 For the Prussians there are two types of head required, the kolback and the mirliton, so clearly both of these need to be provided. 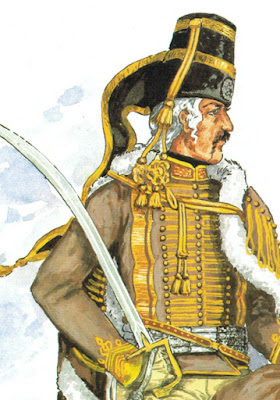 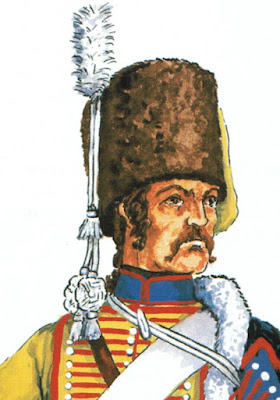 The saddlecloths and leatherwork on the horses of all ranks all look similar (with the 'dog tooth' edging), so the same horses could be used for troopers and command figures.

As the torsos will be attached to the horses we need a minimum of two horse/torso moulds, however for these flamboyant types it might be worth asking PA to produce 3 to add some variety?

For the hussars I think the horses should be in a dynamic pose such as a canter or even a gallop, whilst still trying to maintain some of that 'old school' feel of the old Holger Erikkson figures. 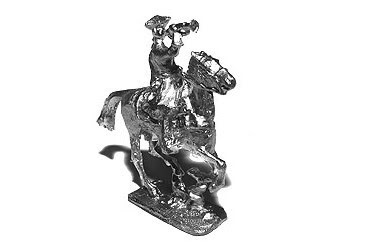 Austrian hussars were very similar to the Prussians, but  with some significant differences.
There were no 'dogs teeth' around the saddlecloth, just a wide stripe, so to be a 'universal' figure it is necessary to change the edging detail. 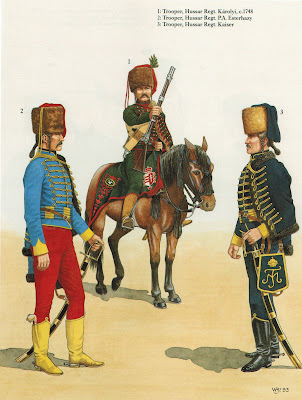 The Austrian trumpeters had a very distinct uniform, they did not wear the pelisse and kolback/mirliton, instead they wore a long tailed coat and tricorn. 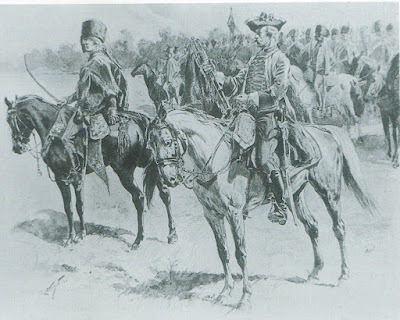 The undress uniform of the officers was similar (he would make a nice mounted Hungarian officer I suspect).

The Russians were again similar but with a couple of differences compared with the Prussians.

The saddle cloth, like the Austrians, they just had the plain striped edging

Reading both Osprey MAA 271 and Kronoskaff it appears they may not have been issued with carbines, although image 1 has a suspension belt to support one, and Kronoskaff states that one source says they had them. On that basis I think I would add them, however if anyone feels strongly enough that they should not carry them, then the whole unit could be made using the officer horse/torso with no cross belt. 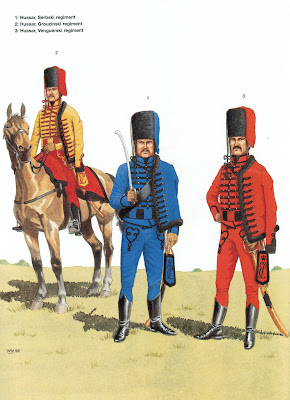 In Conclusion - at last

So after all that waffle, what do I think PA should consider making - I'm not sure how they will sell these - it might be best as a multiple pack like the dragoons?

All saddle cloths to have simple wide stripe on the edge which will serve Austrians and Russians and act as a guide for the Prussian 'dog tooth'.

2 (or perhaps just one) x Trooper/standard with wide carbine/standard belt to be used for troopers and standard bearers. If two poses can be done it will give more variety in the horses.

1 x Austrian trumpeter/officer horse/torso with no carbine cross belt, this figure is specific for Austrians. (It would possibly also make a Hungarian mounted officer).

The 'Austrian' mould needs a tricorne.

All arms need to be interchangeable with a round socket to allow the angle to be changed, with:

As always your comments would be appreciated - and listened to.

I do not know when PA will be doing the hussar moulds, however i would be useful to have your thoughts - particularly if you are likely to be wanting to buy the moulds.