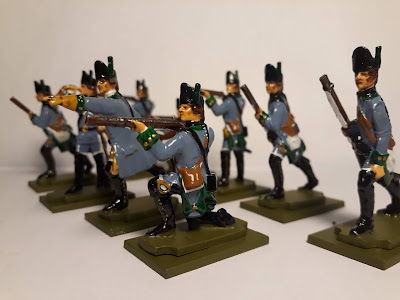 For these I used the following figures:

My troops have gaiters rather than the high boots depicted in most illustrations. The figures have gaiters, and the information is contradictory, I did not feel it worth the effort of showing boots, which would be difficult to model on the bent legs. 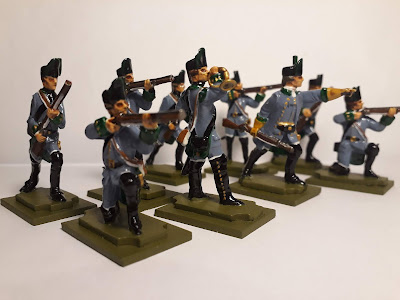 The casket in the mould is not quite right, so I made a couple of modifications:

All of the figures have the musket cut down to a rifle. The Austrian jager rifle was 1120mm long. Assuming an infantryman is 5'5" (1652mm), with the figures standing 42mm high this gives a length of 28.5mm.
I quite enjoyed making these, they are a good example of what we have been trying to do with the range, making a figure which is close to the historical detail by mixing and matching other components.
Posted by SteveM at Friday, November 19, 2021